There are two stunningly beautiful sights in “Edie,” about an 83-year-old woman who wants to climb a mountain. The first is the breathtaking scenery of the Scottish countryside. The second is the lovely face of actress Sheila Hancock, a veteran of the Royal Shakespeare Company, as Edie, an 83-year-old English woman who was once “a wild child,” and wants very much to be that again, at least before it is too late.

Edie is sorting through boxes in the attic when she finds a postcard from her late father. Notice the subtle sound design of this moment, which evokes her memories of their camping trips, which she loved, until she married a cold, controlling man who kept her isolated and would not let her leave. Then, after her husband had a stroke that left him unable to speak or walk, Edie became a dutiful, if resentful, full-time caregiver for 30 years.

After Edie’s husband dies, and three years of living alone, Edie's daughter impatiently pushes her to try an assisted living facility, where they call her Edie and she insists on being called "Mrs. Moore." She fumes through a flower arranging class as the instructor feels it necessary to remind the residents that the scissors are sharp. Edie is done with being careful. She frostily lops the head off of one of the flowers, and takes off for Scotland.

In the train station, a couple literally bumps into her, knocking her over. They are Fiona (Amy Manson) and Jonny (Kevin Guthrie). Fiona rushes off for an appointment, but Jonny stays to make sure that Edie is all right and when there is a mix-up and she cannot find a hotel, he lets her stay at his place for the night. It turns out that he works at a struggling store selling camping and climbing equipment. A pushy clerk at the store talks Edie into hiring Jonny as a guide and teacher, and Edie begins to prepare for the climb, exchanging her pearls, cardigan, and raincoat—and her decades-out-of-date traveling teapot—for a full set of new gear, from jacket to boots and tent.

At first, Jonny is certain that Edie cannot do it. But Edie is not going to give up. As he begins to teach her about what the trip will require, he is moved by her determination and flinty humor. While Fiona warns, "If you want to help her, best thing is to take her home before something happens and you have to live with that guilt," Jonny begins to admire Edie's courage. He begins to realize how much his own life has been hemmed in, following other people's directions, and he begins to acknowledge that he wants something more. He soon wants Edie to make it to the top of the mountain as much as she does. "At first, I thought you were this cranky old cow," he says. "And you are a cranky old cow ... but a good person to have around and what you're doing is kind of inspiring." Both of them were on automatic pilot; both "forgot to expect happiness." The growing friendship between Edie and Jonny has an understated but very genuine warmth.

What's really inspiring is the behind the scenes footage you can find on YouTube, with Hancock talking about her reaction when she learned that to take this role, she would actually have to climb the actual mountain. That's probably not on the curriculum at the Royal Shakespeare Company. Hancock has the same twinkle we see in Edie's eyes when she explains that if she thought of giving up she would see the crew clambering behind her with all of their equipment, and it would renew her resolve because she could not bear to let them down. It was only after they got to the top that she learned that the crew was saying the same thing—if she could do it at age 83, there was no way these big, strong, crew members were going to let her see them give up.

By the time Edie and Jonny make it to the top, we can almost see their souls expand to the farthest reaches of the truly spectacular vista. Hancock's face is just as exquisitely beautiful, as both Edie and Hancock herself revel in the triumph of reaching the summit. 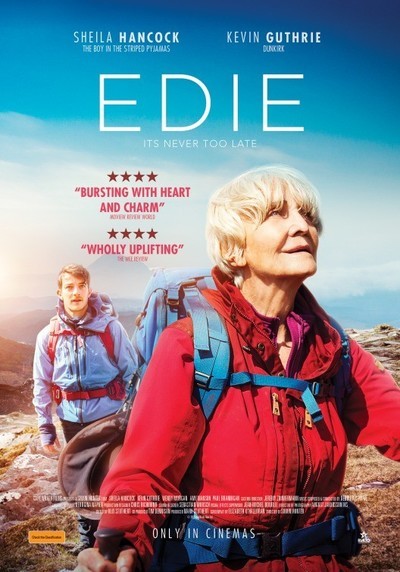