The documentary “Eating Animals” might make you think twice about grilling up some juicy burgers for a barbecue this summer or picking up an order of chicken nuggets at the drive-thru as a quick snack for your kids.

Or it might not. Several movies have come along in recent years aiming to enlighten consumers about the horrors of corporate food production and the benefits of plant-based eating. Some, like 2009’s “Food Inc.,” are more successful than others, like 2011’s “Forks Over Knives,” at persuasively making their points. The passionate intention is clearly there in all these endeavors, but habits are hard to change; sadly, the people who are most likely to seek out a movie like “Eating Animals” are already on board with its message.

Still, director Christopher Quinn’s film is as eye-opening as it is stomach-turning, whether you’re familiar with this topic or not. Working from the best-selling book of the same name by Jonathan Safran Foer (“Extremely Loud and Incredibly Close,” “Everything Is Illuminated”), Quinn explores the evils of factory farming, both in the way it exploits the labor of hardworking families and in the sickening mistreatment of animals it entails. Then there are the larger public health issues that result: the bacteria and diseases that can form and spread when chickens or pigs are crammed into concentrated animal feeding operations, or CAFOs, as they’re known. And then there’s the environmental impact of mechanized efficiency: the long-term harm pollutants have caused to our waterways and the factors that contribute to global warming.

“Eating Animals” tries to get its arms around a lot of topics—all of which are relevant and worth exploring—but doing so in about 90 minutes doesn’t quite feel sufficient. There’s much to be alarmed about here, and Quinn bounces around between all of it in a way that’s almost too brisk and lean. Still, he makes the most of his time with powerful imagery and intimate, moving interviews.

Quinn doesn’t hold back in showing us graphic images of animals suffering at factories, which both farmers and undercover advocates have shot. But he also injects a lyrical, wistful quality to the film in the way he depicts small-scale, old-fashioned farming practices, which a handful of folks are fighting to preserve today. Working with cinematographer Mott Hupfel (“The Notorious Bettie Page,” “The Savages”) and weaving in narration from Natalie Portman (who’s also a producer), Quinn artfully and intimately harkens to the purity of a bygone era. Portman’s breathy delivery of Foer’s words carries such understated drama and outrage, it sounds as if she might burst into tears at any moment.

And it’s true that the reality of these farmers’ daily lives is far from idyllic. We spend quite a bit of time with Craig Watts, a North Carolina poultry grower who signed a contract to raise chickens for the behemoth Perdue. He describes matter-of-factly how he’s $500,000 in debt because of the massive costs of the operation, and how he has discouraged his three children from following in his footsteps. We see the chickens he raises under corporate edicts, some of which are so heavy they can’t even walk. Others are suffering from audible respiratory infections within miserably cramped conditions. This is hardly new information, yet it’s still deeply disturbing to watch.

But Watts, like several other people featured in “Eating Animals,” since has become a whistleblower on this highly problematic industry. Work like his—along with that of the folks from the Waterkeeper Alliance, who track the contaminants these factory farms allow to seep into ponds and streams – provide a ray of hope in this otherwise thoroughly unsettling endeavor. And we visit the laboratory of the California-based Beyond Meat, which creates plant-based burgers and sausages as an alternative to beef.

So maybe try slipping something like that on the grill the next time you’re having a backyard barbecue—and see if anyone notices the difference. At least you’ll know you’re making a difference. 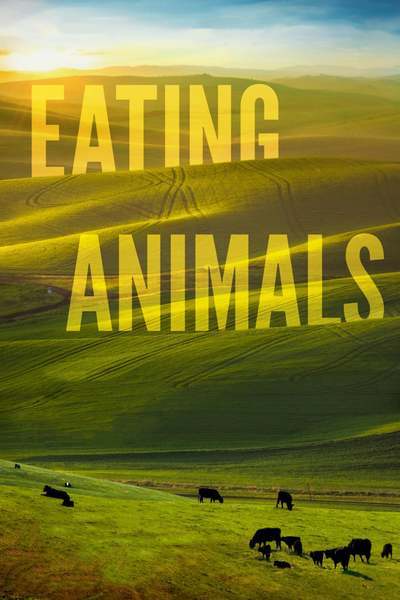