The unappealingly named comedy “Eat Wheaties!” is a tedious exercise in patience that, like a bowl of soggy cereal, I would not recommend to anyone. The movie wastes the comedic potential of so many actors with a cautionary tale about celebrity worship and social media addiction centered on a character too oblivious to realize he’s in the wrong but too brazen in his lack of boundaries.

Written and directed by Scott Abramovitch, “Eat Wheaties!” follows the hapless misadventures of Sid Straw (Tony Hale), a character so clueless, he comes across like an even less capable Michael Scott from “The Office.” Somehow, he’s become a VP in marketing, but it seems like the real pride and joy of his life is that he is organizing an alumni reunion for his alma mater, University of Pennsylvania. While trying to reconnect with old classmates, he remembers the sorority sister of one of his former girlfriends, Elizabeth Banks, and obsessively tries to reach out to her over Facebook to invite her to the reunion. Unfortunately for Sid, he didn’t reach out over private messages, but posted these personal updates and memories of that one time she yelled out “Eat Wheaties!” publicly, earning many repercussions and a restraining order for his actions.

Based on Michael Kun’s book The Locklear Letters, Abramovitch’s directorial debut “Eat Wheaties!” builds on the original’s satirical cautionary tale of celebrity worship that goes too far with a social media update. The boundaries between stars and fans have never seemed more porous, so it's ripe territory for skewering. But in making it a cheeky comedy about how harmless and hapless Sid is, the movie feels like it plays down the very real threat of celebrity stalkers who have broken into homes or crossed other boundaries. Any brief look at a celebrity’s social media platform could show you these fanatical messages are nothing out of the ordinary however, and there are almost no repercussion for weirder posts, except that maybe a manager may flag it for deletion or block a user’s account. That Sid gets slapped with a restraining order is bitterly comic in and of itself. So many characters here play it off as no big deal, like they’re handed out like candy in a pediatrician’s office, when in reality, the process is sometimes a bit trickier and online harassment isn’t always taken so seriously by law enforcement.

There’s something almost inherently mean in the way “Eat Wheaties!” treats Sid. Not only is he constantly set up to fail until the end, his misery and embarrassment are the film’s punchlines. We’re meant to laugh at how badly he insists on embarrassing himself and others, but unlike in the case of Michael Scott, who represents the ill-equipped boss most of us have had at one time or another, Sid is not really in a position of power. His humiliation doesn’t challenge authority, it just mocks a certain cluelessness for cheap laughs but these jokes land more like cringes. Even the talents of supporting actors like Alan Tudyk, Elisha Cuthbert, Paul Walter Hauser, and Danielle Brooks cannot lighten the ill will this movie has towards its main character.

Rotten as it may be, Hale gives "Eat Wheaties!" his all. He commits to every flat bit, every borderline offensive joke and plays it for all it’s worth. Hale uses his expressive eyes to blunder into his character’s every mistake, hook, line, and sinker. He also can soften his gaze and look profoundly hurt, even when the damage is Sid’s own doing. But Abramovitch doesn’t quite strike the right tone for Hale’s performance. The story gets even more implausible as it goes on, yet never moves on from making fun of Sid until the very end when he is given a victory lap for his troubles. It’s a last-ditch effort to salvage a failing movie before the credits roll. 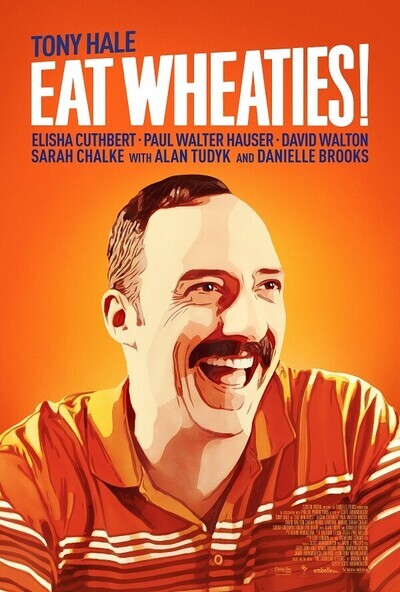