Eat the Question: Frank Zappa in His Own Words

Frank Zappa’s impact on 20th century music, both rock and classical, still hasn’t been entirely reckoned with. The man, who considered himself first and foremost a composer even though his fame largely casts him as a boisterous showman and activist, died in 1993 at the still-appalling age of 52, of prostate cancer. In a couple of weeks two albums of previously unheard music will see official release. His vault is as legendary to fans of his work as Prince’s vault is to fans of Prince. I’m a fan of both, and I got a lot of gratification from “Eat That Question: Frank Zappa in His Own Words,” an archival-footage documentary assembled by director Thorsten Schütte.

“Being interviewed is abnormal,” Zappa observes early on in the movie. The musician had a very conflicted view of the situation; having decided early in his career that rock and roll was in some respects a suitable genre for what he wanted to accomplish musically, he embraced—sort of—the publicity-garnering tools that freak anti-popstar status afforded him. The movie kicks off with a clean-cut Zappa appearing on the Steve Allen show (the clip is readily available on YouTube and such, but looks better here) “playing bicycle.” For Zappa, hitting the spokes of a bike tire for percussion was part of a modernist musical vocabulary—his longtime model, Edgard Varèse, incorporated fire sirens and other unusual instrumentation in his work. For folks watching Steve Allen on televisions, it was, perhaps, weird. And so it went.

The interview footage with Zappa from the early period is largely delightful—in the back and forth with his interlocutors (one of whom includes folk singer Theodore Bikel, some years before Zappa recruited him for his movie “200 Motels”) he displays terrific comic timing, and he uses words like "spiffy." And, this being the 1960s, everyone’s clothes are ridiculous. At one point he talks about his formative influences, and imagines trying to establish “the missing link between Varèse, Stravinsky, and Webern.” Soon there’s some footage of a relatively early version of Zappa’s band, The Mothers Of Invention, playing an all-instrumental version of “Middle Of The Night” and the theme of “Uncle Meat” and the missing link is there. Not only that, but the template for groundbreaking progressive rock bands such as Henry Cow is laid out in full. Exciting stuff.

The movie proceeds chronologically, and Zappa’s social commentary sometimes devolves into a kind of truculence, although it’s difficult to argue, for instance, with his assertion that America’s education system has nothing to do with “preparing people to live a life that has beautiful things in it.” As the movie enters the period in which the scatological content of his lyrics rose considerably, Zappa the interviewee seems to become increasingly unaware of the extent to which his own work was becoming deeply reactionary. Watching him contemptuously dismiss the likes of Devo for dressing funny (in the song “Tinseltown Rebellion”) is deeply ironic on several levels coming from the guy who staged the cover art of “We’re Only In It For The Money.”  His rants against “American stupidity” are in certain respects spot-on, but they ignore the fact that a crucial part of his work stems from a deep love of American stupidity and/or impudence. This is the man who once instructed keyboardist Don Preston to play “Louie, Louie” on the Royal Albert Hall pipe organ.

And on the other hand, his indignant common sense during the PMRC hearings is wholly admirable, and the interviews conducted during his last years are terribly poignant. The workaholic Zappa notes in one exchange that he can now only manage to work from 9:30 AM to 6:30 PM on a good day. The movie put me on a major Zappa listening jag (one that, I have to admit, does not include “Sheik Yerbouti”), which makes it sound like a fan-only proposition. It kind of might be, but I hope it isn’t. 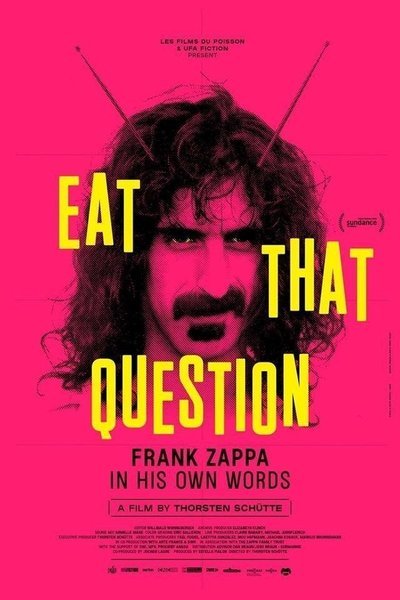 Eat That Question: Frank Zappa in His Own Words (2016)

Rated R for language, some sexual references and brief nudity.

Frank Zappa as Himself