How the hell do you sell a slow, moody character study like “East of the Mountains”? Character actor Tom Skerritt takes the lead for once in this gentle, melancholic drama about an older man who, while overwhelmed by suicidal thoughts, figures some things out for himself. Fans of David Guterson’s source novel will probably get it, but everyone else might need a moment to get the picture.

There’s not much conflict in “East of the Mountains.” Ben, Skerritt’s character, almost loses his dog Rex after another vicious canine goes for Rex’s throat. And while Ben does eventually confront the belligerent dog’s owner, this isn’t a “John Wick”-style revenge narrative. Ben’s too old for that.

Ben’s also got cancer. You’d be forgiven for thinking that this is the sort of role that could be publicized as the role of Skerritt’s lifetime, or something equally patronizing. Thankfully, Skerritt doesn’t work like that. His low-key warmth gives director S.J. Chiro and screenwriter Thane Swigart a charming, nuanced performance that’s worthy of their considerate and moving adaptation.

That being said, it’s also very easy to assume the worst about “East of the Mountains” based on how Ben’s introduced to viewers. He heads for the mountains after a halting conversation with his adult daughter Renee (Mira Sorvino). Ben’s car breaks down along the way, though that doesn’t seem to bother him. We’ve already seen him stare down the length of his rifle, then turn away with disgust. So we already (sort of) know what’s on Ben’s mind.

You might imagine that Chiro and Swigart will over-stress Ben’s dark mood for cheap catharsis, especially given how, later on, they flash back to Ben’s earliest memories of his wife Rachel (Victoria Summer Felix). But Skerritt’s performance opens up Ben’s story in ways that make you want to look for his signature care and intelligence throughout “East of the Mountains.”

Ben’s like a great latter-day Clint Eastwood character in that he’s defined, but never really limited by his prickliness and intolerance. He sometimes slurs his speech when he’s done talking to people, as if his batteries needed recharging, like when he grumbles to Renee that, “I’m not sure my health is your business.” Ben also sometimes talks loudest with a murmur or a quiet stare, like when he offers money to Roberto (Robert Fuentes), a stranger who gives Ben a lift, but Roberto replies: “It’s not necessary.” It’s not just the words that Fuentes says, but the way that Fuentes lands on them, without ceremony or condescension.

You have to be open to, and even curious about Skerritt’s character if you're to know what makes “East of the Mountains” so special. A lot of scenes match Ben’s energy in the sense that they highlight little, unflashy qualities in his and his co-stars’ performances, like when Ben pokes down a small bridge, or when his plastic shopping bags rustle on his short walk back from the general store to his hotel room. Skerritt’s voice also turns over like a purring motor engine when his characters admires the handiwork of Anita (Annie Gonzalez), the animal vet that saves Rex’s life. He compliments her stitching, and while she doesn’t need to, she responds in kind but refusing to hold his hand: “I know. But thanks.”

Ben’s reserved, but open in a way that a lot of real older people are, like when Anita’s son Derek (Diego Collie) asks what war Ben was in, World War II? “Korean War,” Skerritt says, after a short pause. Brief exchanges like that help viewers to appreciate Ben and his concerns in a way that go beyond the usual end of life clichés, let alone the well-meaning tropes that surround characters who are defined by their suicidal ideation. That goes a long way in a movie whose plot moves at its own pace, and doesn’t demand much from viewers, except to follow Ben wherever he wanders to next.

If you do click with Skerritt’s performance, you’ll see that a lot of what's seemingly missing from “East of the Mountains,” as far as drama goes, is suggested or even addressed later on in the movie. Like the way that Ben picks up, but almost never uses his long rifle (it belonged to his father). Or how he doesn’t seem to care when Renee suggests that he meet and reconcile with his brother Aidan (Wally Dalton).

Once Skerritt's character feels like talking about his issues, those conversations not only provide some retrospective context, but also feel narratively grounded and emotionally resonant. “East of the Mountains” feels like Ben’s story, either as told by him, or maybe just as an extension of him; Skerritt’s co-stars get that and match his clear-eyed simplicity in their respective performances. That sort of collaborative effort is exciting to watch, even if it’s also kind of hard to advertise. 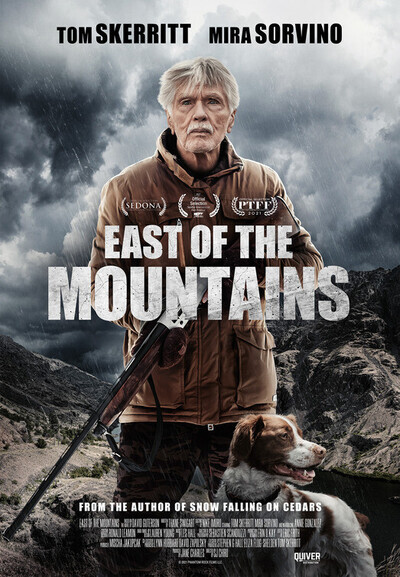