The hero of "Early Man" is a caveman named Dug. If you smiled while reading that, this is definitely your kind of movie—the kind where you think, "Surely they wouldn't make a joke that basic" right before the movie makes it, then follows up with an implied soft-shoe routine, a "ta-dah!" and outstretched hands.

Director Nick Park, the mind behind Wallace and Gromit, treats this stop-animated film about Stone Age people battling Bronze Age people as a pretext for roughly ninety minutes of alternately cornball and shameless bits. These are interspersed with conversations between a dumb character and a character designed as "the smart one" only because he's not quite as dimwitted as the person he's talking to. There are really only two kinds of characters in "Early Man," innocent fools and smug twits who will eventually get their comeuppance. The story is mostly a pretext for gags, as well as for impressive bits of comedy staging by Park, who takes a solo directing credit on a feature for the first time here. Park and his screenwriters, Merling Crossingham and Will Becker, seem to be channeling the likes of The Three Stooges, Abbott and Costello, and Mel Brooks: heroes of comedy so primordial that their official portraits should be cave paintings.

The movie never lives up to its magnificently silly opening sequence, which re-creates the extinction of the dinosaurs. Park's camera slowly dollies back from a raging volcanic eruption to reveal a classic tableau of a triceratops battling a Tyrannosaurus rex, followed by configurations of humans battling each other (one bloke tries to chew another's bare foot as if it were a meatball hero). The subsequent discovery of the meteorite's remains in a crater leads, inevitably, to the invention of football, or as we Yanks call it, soccer: a cave person tries to pick up the smoldering rock, which is shaped like a regulation size 5 ball right down to the hexagonal patterning, but the ball is red-hot, so the cave person drops it, and another one stupidly picks it up and drops it, too, and it rolls to the feet of a third cave person, who yelps at having his feet burned and kicks it it away. And that's how "Early Man" becomes a sports movie.

The story, er, kicks in sometime later on the evolutionary calendar. The descendants of early humans, represented by the goodhearted but dim Dug (voiced by Eddie Redmayne) and the equally goodhearted but even dimmer tribal leader Bobnar (Timothy Spall), are threatened by the army of a nearby Bronze Age society, which barges into the tribe's peaceful, forested valley atop armored mammoths and lays claim to the area’s bronze deposits. Dug gets captured and ends up in the Bronze Agers’ town, becomes smitten with a pan-seller named Goona (Maisie Williams)  and winds up an arena where the main spectacle is football. And it's here that Dug gets the bright idea of challenging the champion local team, Real Bronze, to a match. The winner gets possession of the valley and its bronze deposits.

The bad guys' leader, Lord North (Tom Hiddleston), thinks this is a great idea. His team are professionals. Dug is an amateur and a chowderhead to boot, and there's no indication that his people even know what football is, let alone how to play it. The first training session is a disaster. When he tells his fellow tribespeople that they have to attack the ball, they take him literally. They seem baffled and annoyed when he explains that football is a foot-driven game, and that you can only use your hands for playing goalie, throwing the ball in from out-of-bounds, and signaling, and not for, say, punching someone in the face and picking up the ball while they're unconscious. Goona turns out to be an exceptional football player who was forbidden from competing against the arena's men. She's eager to bring her skill set to bear on training Dug's team, and pretty soon Lord North starts to feel pressure from Queen Oofeefa (Miram Margoyles), who makes it clear that she expects a decisive victory.

There's nothing here you haven't seen in other sports films and faux-prehistoric adventures. What makes "Early Man" enjoyable is the way Park and his writers detail the heroes' good-natured oafishness and the bad guys' snooty arrogance (they speak with wildly exaggerated Franch Ok-santz-suh) and embellish primordial cliches with "Flintstones"-style design touches, including baby crocodiles that serve as clothespins for laundry lines, scarab beetles that double as beard trimmers, and "message birds" that repeat whatever the sender told them, including bits that the sender would prefer that the receiver didn't hear. No joke is so silly that it can't be mounted with exuberance by Park and company. Encountering sliced bread for the first time in the Bronze Age town, a Stone Ager exclaims, "Sliced bread! That's the best thing since ... well, ever!" When Lord Nooth's infantry takes over the valley, he orders his men to "Start mining ore!" "Or what?" an underling asks.

You know full well whether or not you're the audience for this film. Consider yourself either warned or enabled. 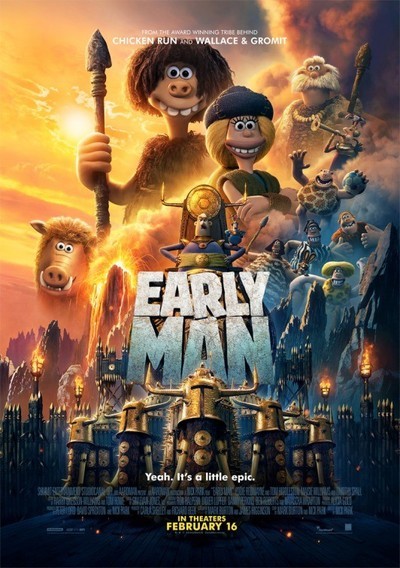 Rated PG for rude humor and some action.