Drunk Stoned Brilliant Dead: The Story of the National Lampoon

If you’re a scholar of comedy, “Drunk Stoned Brilliant Dead: The Story of the National Lampoon,” a concise doc about the founding, life, thriving, and death of the '70s-defining satirical magazine, is likely a must-see. It’s an engaging and entertaining film, filled with funny anecdotes expertly related. It contains some notable “get” interviews. The magazine’s reticent co-founder, Henry Beard, the buttoned-down superego to his Wildman cohort Doug Kenney, appears on camera throughout, which was a surprise to me: Beard, while still an active writer and editor, has kept a downright reclusive public profile in the years since the magazine folded.

Of course, if you are a scholar of comedy, you probably already own the coffee table book, edited by former Lampoon contributor Rick Meyerowitz, also called “Drunk Stoned Brilliant Dead,” which tells the story of the magazine and some of its most notorious staffers. That book also features generous samplings of the magazine’s work, which the movie, directed by Douglas Tirola, can only offer piecemeal, or mutated via animation, a very popular tactic in documentaries nowadays. What the movie offers that the book can’t are exciting clips from the Lampoon’s stage show, which featured performances by future screen comedy icons such as Chevy Chase, John Belushi, Christopher Guest, Gilda Radner, and many more. The movie does an excellent job of chronicling how those stage shows gave rise to “Saturday Night Live,” which created a huge talent drain at the magazine, and how the film “National Lampoon’s Animal House,” while a huge unexpected monster hit that vindicated the insight of the magazine staffers who conceived it, also diffused the energies of some of the magazine’s visionaries.

These chronicles are interspersed with a lot of things you see too much of these days in docs about cultural phenomenons: interviews with celebrities who tell you why the cultural phenom under examination here was really important and stuff, animated recreations of particularly outrageous anecdotes, and poignancy. The story of Kenney, who died in a hiking accident in Hawaii in 1980, is played out like something out of a Fitzgerald tale with longer hair, while the passing of anger-management failure Michael O’Donoghue elicits a bit less in terms of warm sentiment.

As watchable as the movie is, it’s an almost relentlessly incurious history. The founders of the magazine, and its admirers, go on at some length about what outsiders Beard and Kenney were as they tried to pitch their spinoff of the Harvard Lampoon to Madison Avenue in the late 1960s. Yes, you read that right: the Harvard Lampoon. No one can be bothered to point out that an “outsider” coming from Harvard is still, um, coming from Harvard. The doc is similarly unconcerned with the fact that the magazine was by and large not just a boy’s club but also a white boy’s club. It’s not as if the Lampoon didn’t butt heads with feminist forces during its actual existence, and the canard about women not being funny is far from dead. So it would have been nice to hear from, say, writer Anne Beatts about this, as entertaining as her anecdote  about getting into the mag by dint of having been a male staffer’s girlfriend. And while a few black performers are seen in stills from the Lampoon’s stage show, the overall aesthetic that comes across in the movie is so almost relentlessly white that one almost has to ask: could Beard, P.J. O’Rourke, Sean Kelly, or any of these guys, even ever conceive of having an African-American writer in on an edit meeting? Except nobody making this movie did. Which, admittedly, doesn’t amount to anything like a massive social injustice, unless, maybe you stop for a minute and look hard at what the magazine was satirizing. 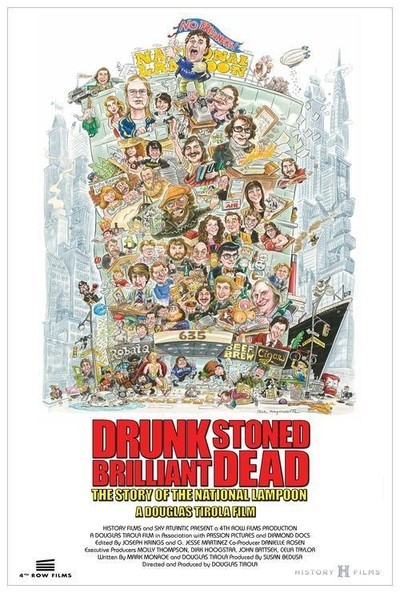 Drunk Stoned Brilliant Dead: The Story of the National Lampoon (2015)