The “big” scenes in Andrew Ahn’s exceedingly gentle “Driveways” involve a young boy named Cody (Lucas Jaye) listening to an older man named Del (played by the late Brian Dennehy). Del shares bits about his life—too precious to mention here—and more than once, their interactions end with Cody looking up at him, processing it all, and just saying “Yeah.” It’s a total kid reaction, but in the quiet power of “Driveways,” it’s all about what's underneath the surface of these people, the osmosis of meaningful however brief connections. Cody and Del come from opposite life experiences, but there is a cinematic tenderness in their time together.

This is a movie that’s impressively, if not stubbornly understated, where life stories come from select bits of precise dialogue, with lovingly rendered characters put into a collection of scenes that simply allow us to live with them. Proving after his incredible debut “Spa Night” that he is still one of the most graceful American filmmakers in the game, Ahn has made the kind of movie that has the power to control your pulse, complete with a piano score (by Jay Wadley) that nearly inspires meditation while watching cinematographer Ki Jin Kim’s thoughtful images. I returned to “Driveways” for a second viewing only a couple hours after first watching it, but the more accurate word would be that I escaped to it.

Written by Hannah Bos and Paul Thureen, the story takes place over a still summer in a small New York town. Cody’s aunt April has passed away, leaving a home packed with hoarded items, and a responsibility for his mother Kathy (Hong Chau) to empty the house so it can be sold. The house is pitch black with knick-knacks towering up to the ceiling, and when she first tries to handle a giant pile, it topples over onto her.

Wrangling Cody is not one of Kathy's most demanding duties, as he’s an obedient team-player who recognizes his mother’s pain, even if he doesn’t understand it. Cody is the kind of kid who often winces when he asks questions, not wanting to disturb people, one of many striking traits from Jaye's excellent performance. He’s a sensitive kid, something his mother is actively aware of, and that becomes one of his many endearing qualities while interacting with other people in the neighborhood (like a racist woman played by Christine Ebersole, and her two macho preteen grandsons).

Cody makes an unlikely friend in a lonely old man who lives next door, Del. At first Del is just the Korean War veteran who gets a ride from Kathy to the VFW after being forgotten by the friend who was supposed to pick him up. But then he’s Del, Cody’s safe space, who imparts him with little stories, of which Cody only has select follow-up questions. Most of all, they give each other what they need—some company, a relief compared to the many instances we see them in quiet isolation.

In one of his last roles, Dennehy is a titan within such a laidback story, with Ahn’s camera packing a lot into the way he sits alone at a dining table, or shares a couple laughs with his friends at bingo. He’s a strong fit for its sentimentality, especially in the brief tidbits he offers about his late wife Vera, or when he's seemingly lost in the color and magnitude of a local grocery store. But the role is particularly legendary for the scenes he shares with Jaye, the way that Del naturally provides wisdom by reflecting on his life, with Dennehy's classic shining eyes affirming Del's sincerity.

Back inside April’s home, Chau develops her own story, the loneliest one "Driveways" has. Working through the overwhelming belongings of her sister (who was 12 years older than her), Kathy is thrown into a life she did not know about, and had become estranged from while she herself became the self-professed “wild one.” And when Kathy's not working on the house, she's doing medical transcriptions with hopes of one day becoming a nurse. In the few scenes that focus explicitly on her, Chau tenderly shows a woman making her own space, and a tough-hearted, sometimes wise-cracking former rebel slowly letting her guard down.

Ahn’s film is far more calming than it is jostling, and your mileage may depend on whether you wish it did more with these characters—if you want to see more footage of Kathy working through her sisters’ home, or scenes of Del and Cody bonding. But it becomes clear once you’re on the movie’s wavelength that this is exactly the story its creators want it to be, especially in how it stands back from typical narrative structure with Cody’s degree of sensitivity, embracing its very strength.

“Driveways” does not comprise itself of many heavy dramatic beats, and yet it can still grab you with moments of empathy that alone warrant this movie’s existence. The best might be the one that gets the "plot" in motion—Kathy asides to Del while driving him to the VFW about the lack of electricity in April’s house, and how expensive it will be to get it turned on for just a few days. The next day, Cody and Kathy return to the house and see a stack of power strips, with an extension cord running from Del’s home. At a time when apathy has become disturbingly claustrophobic, such displays of surprising, quiet kindness are a true balm.

Premieres today on VOD and digital. 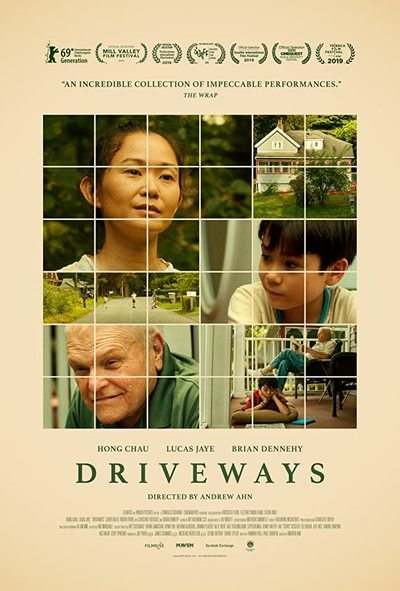