For lack of a better expression, Daria Price’s “Driven to Abstraction” feels like watching paint dry. The excitement of watching an artist at work—or creating the art yourself, if you’re talented—has ended. Now, it’s time to settle in and watch liquid enmesh itself onto the canvas as this straight-faced documentary recounts one of the art world’s most notorious scandals in the most anemic way possible.

Price’s documentary opens just at the dawn of problems for the world-renowned Knoedler art gallery, one of the oldest in New York City at the time. Buyers started getting their big ticket paintings from the likes of Jackson Pollock and Mark Rothko verified, only to have them rejected by experts. Some cited historical inaccuracies, like paint that didn’t exist until after an artist’s death and their signature on the work misspelled. But for 15 years, Knoedler art dealer Ann Freedman bought 40 paintings from Glafira Rosales, a Long Island art dealer who seemed to have stumbled on a treasure trove of masterworks—all of which would be later discovered to be forgeries. Freedman had sold them for the princely sum of $60 million, but with their authenticity now in question or outright rejected, angry customers demanded their money back, and the FBI was on their heels. Knoedler, once a proud staple of the New York City art world for 165 years, closed its doors in 2011 in the wake of the controversy.

Price, who directed, produced and edited “Driven to Abstraction,” profiles several art journalists and experts for every angle of this story. Although exhaustive in scope, the movie somewhat loses the timeline of events as the camera jumps from person to person. Much of the information is blandly presented, as if Price had laid out her recordings, edited them together with iMovie and turned in a first draft. Pivotal information like dates sometimes fall by the wayside, making the story feel like a blur. In more capable hands, the narrative could have been supported by its many testimonies not distracted by it.

Visually, the documentary is largely made up of talking heads, with occasional interstitial footage of reporters working at their desk, or in the case of Patricia Cohen at the New York Times, walking the hallways for so long, I started to wonder if she was lost. What few visuals are in the documentary seem partly made up of stock footage or badly rendered Photoshop compositions. Sometimes the images are animated in the style of a high-schooler’s PowerPoint presentation. For instance, when someone yells in an argument, their photo grows bigger, to signify their voice getting louder. Inexplicable zooms on both stills and subjects make the documentary feel even more unpolished. Perhaps nothing tops the lead pipe subtlety of matching an image with what a subject is talking about, like when someone mentions missing the “red flags” in Rosales’ story and a photo of actual red flags appear.

Set to music that sounds like the public domain keyboard synths accompanying a silent film, “Driven to Abstraction” is too inept to enjoy. It might help to know a bit about the mysterious aspects of the high priced art world—the cliques, the language, the suspicions, the anonymous donors—but even then, I’m not sure the documentary unveils anything that hasn’t already been written about by the reporters in the film. I thought maybe "Driven to Abstraction" might be trying to become some form of meta commentary, with its own forgery of typical doc conventions, but it’s just not assembled well enough to pull that off. 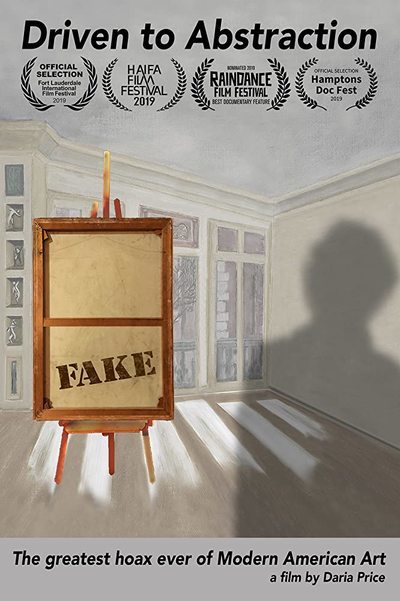