There’s a brief transition early in the three hours of Japanese director Ryûsuke Hamaguchi’s astonishing “Drive My Car” where the wheels of the movie’s integral automobile morph into the spinning reels of a cassette tape in a recorder. For an instant, they fuse, almost as if the voice captured on that device functioned as the vehicle’s fuel. And in a sense it does, since that audio accompanies the driver like a sonic ghost mile after mile.

Understated in its extraordinary rewards, this is the second Hamaguchi-helmed feature released this year (the other being “Wheel of Fortune and Fantasy”), which gleans its premise from one of Haruki Murakami’s short stories in the collection Men Without Women. Selected as Japan’s entry for the Best International Feature Film Oscar—the first time the filmmaker’s work received the honor—“Drive My Car” marks his deserved breakthrough.

Basking in post-coital serenity, actor and theater director Yûsuke Kafuku (Hidetoshi Nishijima) and his wife, screenwriter Oto (Reika Kirishima), verbally build a story for her next television project. They speak of a teenage girl so infatuated with a classmate she infiltrates his home to steal unmissed souvenirs. Their spontaneous fiction sets in as one of the storytelling layers that eventually overlap with self-referential grace under the auspicious narrative guidance of Hamaguchi and co-screenwriter Takamasa Oe.

Two years after a personal tragedy laced with unresolved resentment, Yûsuke moves to Hiroshima, a city with its own history of disaster, to put on a new stage version of Anton Chekhov’s Uncle Vanya, performed by actors speaking their respective native tongues. As part of the job, he must agree to have a chauffer, a condition he is reluctant to. Getting behind the wheel of his outdated, two-door model is ritualistic in its importance.

Burning bright red through the streets and highways, the artist’s car is a temple of freedom and solitude, the embodiment of the return and the departure, the way back home to his beloved and the escape from the fallout of their present. It’s in the silence of that moving space that Oto’s voice comes through the speakers via the aforementioned tape feeding him lines, a lifeline. What she recites might come from the classic text or perhaps directly from her, but the distinction doesn’t matter. Both become one and the same in a continuum.

First from the removed safety of an unnoticed reflection on a mirror, then with the up-close intensity of two people listening to one another as if the world around them had faded into irrelevance, “Drive My Car” contemplates Yûsuke’s inner plight with softhearted tact, never pushing too strongly but letting the pain unfurl on its own time. Crumbling in a piecemeal manner, when Yûsuke finally receives the divine relief of catharsis from Hamaguchi, the long emotional containment makes for a staggering, shared release.

Unassumingly shattering, a description just as applicable to the film as a whole, Nishijima’s turn astounds for its unshowiness. As a grief-stricken husband and father masking his continued distress with professional diligence, he maintains strenuous composure until he can no longer swallow his anger towards the person he loved most. The actor’s stoic gestures provide an impenetrable fortress unwilling to give away any hint of his true self.

That energy, of wanting to remain unnoticed and unquestioned, is matched by his assigned personal driver, Misaki (Tôko Miura), a young woman in turn running from her own guilt buried in the ruins of a previous life more than a safe distance away. While observing Yûsuke’s daily rehearsals with his cast, including embattled star Kôji Takatsuki (Masaki Okada), a slowly constructed affinity with Misaki comes to the foreground. Miura’s modestly assertive performance amplifies a sentiment of mutual confidentiality, and later of the guilt that numbs them both.

A reserved Misaki initially limits her interaction to pressing play on his recording. But a dinner scene where he praises her smooth driving skills dismantles whatever air of servitude was left in the power imbalance imposed on them. Hamaguchi further speaks of an unspoken understanding between people in the way Yûsuke’s international thespians perform with one another from sensorial memory, often not comprehending what the other says through language but feeling alone.

Bountiful in subtle imagery from cinematographer Hidetoshi Shinomiya, the film mines majestic visual symbolism from seemingly ordinary occurrences. Take for example a shot of Yûsuke and Misaki’s hand through the car’s sunroof holding cigarettes as to not let the smoke permeate their sacred mode of transportation—an unspoken communion of respect. Long conversations in the back seat of the tried and tested four-wheeled co-star force the camera to stay on their faces, registering the enunciation and reaction of the other without other embellishments, honoring what's being said and how the other is receiving it. That back and forth between two interlocutors nakedly spewing sincerity feels riveting in its simple composition.

There are no flashbacks in this spanning, humanistic epic, a choice that coincides with the theme of what’s ahead and not what’s in the rearview mirror of the past. Characters come alive not in visions of who they were but in the product of those experiences, in who they are now. In the delicate, patient touch of Hamaguchi’s directing, characters cease to be idealized confections made of words and ideas on the page of a scribe. Their transmutation into the bodies of the cast members happens by osmosis, it appears, to impart not patronizing wisdom but an empathetic revelation that feels lived-in. A thoughtful and tearful ride in which the destination is a spiritual confrontation with oneself, “Drive My Car” devastates and comforts through its vehicular poetry of the sorrow from which we run, the collisions that awaken us, and the healing gained from every bump in the road. 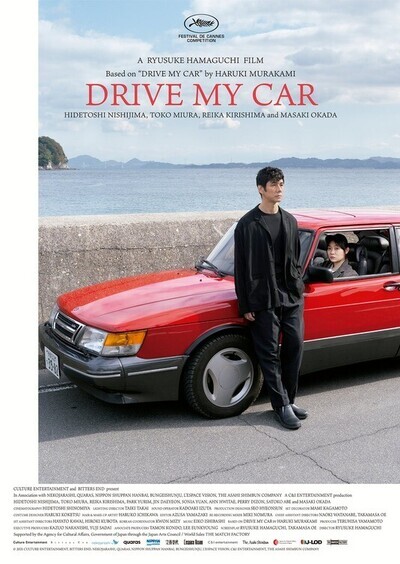