Every year on Memorial Day, the annual mourning of those who died while serving in the US Military colors the day. Parades stream down tiny main streets and wide avenues across the country; the United States flag lowers to half-staff; volunteers will add miniature flags to gravesites; a national moment of remembrance takes place. The yearly observation, by most accounts, traces its roots back to the Civil War. For those Black folks who lived in Tulsa, Oklahoma, on Memorial Day—May 31, 1921—that fact carries a cruel irony. On that night, the first Black screams of the Tulsa Massacre were heard.

Incited by reports of a Black man (a 19-year-old shoe shiner named Dick Rowland) accosting a white woman (elevator operator Sarah Page), the gruesome event witnessed racist whites crossing the train tracks into Greenwood, the Black section of town revered as Black Wall Street, to enact revenge. Over the course of 16 sickening hours, which saw gunfire, lynching, and coordinated aerial assaults, an estimated 100-300 people were murdered. The great majority of them were African American. 100 years after the tragedy questions still remain: Exactly how many people lost their lives? And where are their bodies?

Executive produced by Lebron James and Maverick Carter, and directed by Salima Koroma, the documentary “Dreamland: The Burning of Black Wall Street” premieres on CNN tonight to answer those mysteries while effectively paying tribute to the dead by recalling that day in their words.

To know the story of the massacre, one must first learn the origins of Tulsa. Koroma reaches back to the 1830s to unveil how the Five Civilized Tribes—Cherokee, Chickasaw, Choctaw, Creek and Seminole—first owned Black slaves in their native southern states. Upon the 1830 Indian Removal Act, Native American slave owners took their “property” with them on the Trail of Tears. The Five Civilized Tribes even supported the Confederacy during the Civil War. For most, including myself, these revelations will come as a surprise. What they divulge is how African Americans, even among a group similarly hated by white folks, still occupied the lowest rung in the American experiment.

By the conclusion of the Civil War, the reformed United States government issued the Creek Treaty of 1866. The order made the slaves owned by Native Americans into Freedmen, granting them mineral rich land that held oil. Tulsa not only became the oil capital of the world, attracting whites seeking fame and fortune. It created a Black upper-class, located in Greenwood. Because of segregation, African Americans needed to create their own schools, newspapers such as the A.J. Smitherman-run Tulsa Star, pool halls, hotels, grocery stores, nightclubs, lawyers, doctors, and movie theaters like the Dreamland owned by Loulah and Josh Williams. Hence the creation of the Black Wall Street.

While watching “Dreamland,” I was particularly drawn to Koroma’s mesmerizing recreation of the era. Vibrant colorful animation inspired by Harlem Renaissance painters like Jacob Lawrence and William Johnson renders the electricity of Greenwood’s everyday happenings—a place once described as Harlem, Bourbon street, and Chocolate City all in one—in dizzying terms. Black and white archival footage from the era recounts the daily rituals: church-going, race tracks, basketball, and dancing, with an observational eye that reminded me of Oscar Micheaux and Zora Neale Hurston’s filmic recordings of Black life during the 1920s and '30s. In two different clips, for instance, two African-American men, filled with an ebullient aura born from economic freedom, doff their cap and smile at the camera. And from the surviving journals of residents, we can also chart the rising tensions wrought by white jealousy of Black wealth that led to death.

Koroma’s 98-minute documentary, however, doesn’t solely recall that heartbreaking day. She records the aftermath in blistering detail, too. While the story of the massacre concerns large-scale murder, its burial exemplifies the displacement and erasure of Black history by white people. Several talking heads, including the city’s current Mayor, G.T. Bynum, openly admit how their Oklahoma history classes included scant information regarding the tragedy. In 1997, the state legislature appointed an 11-person commission to investigate the 1921 events. They interviewed over 300 Tulsans, some 51 survivors, and learned of reported mass graves in Oaklawn cemetery. Nevertheless, not until 2020 was an excitation granted. Throughout Koroma’s investigation, she circles back to the archeologists’ ongoing search, and the members of the hopeful African-American commission for the descendants.

Koroma also outlines a contemporary threat facing the former Black Wall Street: gentrification. For decades, the footprint of Greenwood has shrunk, whether by plans for urban renewal—a subterfuge during the 1970s to subtract Black land to create a highway—or the selling of property to new white arrivals.

Sometimes Koroma’s film is visually repetitive, and heavily relies on drone shots to capture the excavation effort and the yellow letters of “Black Lives Matter” that are scrawled across the street. I also wish more footage was shared from eyewitness accounts. At one point, a talking head explains the power behind first-person testimony. Not fully tapping into that power is a missed opportunity. When the 1999 footage of survivors is shown, that’s when the history feels most palpable.

Even so, Koroma uncovers so much that it’s difficult to totally fault her. As Kristi Williams explains, the excavation effort is a chance for their ancestors’ story to be recognized. And after the story of the Tulsa Massacre entered the national consciousness because of Damon Lindelof’s “Watchmen” and Misha Green’s “Lovecraft Country,” “Dreamland: The Burning of Black Wall Street” this Memorial Day feels like the first time that the voices of the victims have finally been heard. 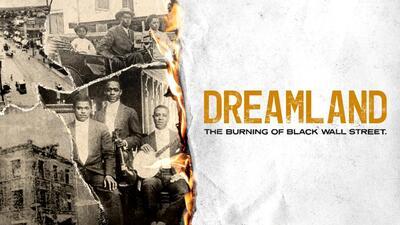