Maggie (Andrea Londo) and Jimmy (Jackson Rathbone) have never met in waking life, yet they see each other when they sleep. Our first glimpse of the pair comes in one of their dreams. Sitting on opposite sides of a Chicago CTA train car, Jimmy sketches a picture of a bird person riding a bicycle while Maggie reads Emily Dickinson’s “Songs of the Soul.” A spark flickers whenever their eyes meet, and more than they realize, the pair share an emotional connection drawn from a sense of loss. In fact, when the train doors opens, Maggie sees a casket with the name “Sarah,” and through another door, Jimmy spots his half-brother standing by a coffin.

In writer/director Hugh Schulze’s fantastical romance “Dreaming Grand Avenue,” Maggie and Jimmy intertwine through poetry and dreams to grapple with the city’s gun violence and its Indigenous heritage. It is an ambitious story that bites off more than it can chew.

“Dreaming Grand Avenue” initially gives off neo-noir vibes when “Dream Detective” Jack Yancy (Tony Fitzpatrick) enters into a darkly neon-lit bar owned by Andromeda (Wendy Robie). Andromeda calls Yancy because she wants Jimmy for a job, and needs the detective to act as a go-between. With his garish tie, open collar, and trench coat, Yancy is your typical gumshoe. For her part, Andromeda possesses the ability to speak to people in their dreams, and there’s a small hint that she transcends time as well. Both Fitzpatrick, a veteran Chicago actor with appearances in everything from “U.S. Marshalls” to “Knives and Skin,” and the “Twin Peaks” star Robie, provide a calming influence to a busy story. Fitzpatrick not only delivers some savagely snarky one-liners—when Jimmy asks Yancy how he knows so much, Yancy retorts “I’m a detective, Ace”—he also finds a gentleness inside the gruff sleuth that buoys his younger screen partners.

The jobless Jimmy is the type of slacker who purposely fails on job interviews rather than swallowing his pride by taking menial work. While some of his reluctance stems from a depressed malaise, the only activity that soothes him is snorkeling in a bubble bath. Under the weight of the film’s other events, such as a disintegrating relationship with his girlfriend (Bryce Gangel), the melancholy elements to his character feel disjointed.

In fact, they barely resonate due to how Schulze weaves in Maggie's trauma. While Jimmy struggles with the memory of his absentee father, Maggie combats her domineering dad (Tony Castillo), who’d prefer she finish her law degree rather than working at a daycare. Her matters are further complicated as she deals with the unruly parent (Abby Pierce) of a student, the sorrow she feels for the child victims of the city’s gun violence, and the nightmares of a recently deceased child—which she’s seeing a doctor (Tiffany Bedwell) for as part of a dream trial. Too many themes inhabit the picture, to the point that nothing makes an emotional dent. And there’s not much either Londo, of “Narcos” fame, or Rathbone, of the “Twilight” series, can do to hold everything together.

They’re further hamstrung by the drama's poetic elements, which never add up. For instance, the arm of Jimmy’s half-brother features a tattoo with a reference to Joseph Campbell reading, “Follow your bliss.” In combination with the references to Dickinson, these literary allusions act as commentary upon the aforementioned theme of depression. But in a story set in Chicago, one that captures unique locations beyond the confines of downtown, it feels odd to lean on east coast writers. The geographical reliance carries over to Walt Whitman (Troy West) himself, who appears as a guide to both Maggie and Jimmy. And while his cameo leads to a stirring recitation of the poem “To You,” thoughtfully shot by Christopher Rejano in Chicago’s historical jazz club The Green Mill, he’s another unnecessary ingredient to a narrative concoction brimming to overflow.

“Dreaming Grand Avenue'' isn't altogether a neo-noir, a romance, or a social justice piece. It’s as varied as our nightly fantasies, accompanied here by a mystifying score from Seth Boustead. But by the time Schulze adds both a demonic figure (Jay Worthington) who works to tempt Jimmy, and the Indigenous employers who want Jimmy to paint a medicine wheel—an ode to Chicago’s Potawatomi past—“Dreaming Grand Avenue'' stumbles to an unearned finish. And while there’s quite a bit to admire about Schulze’s ambition, by trying to address all of his characters’ ills he awakes to the prime disease—the erasure of people of color from Chicago—when it’s too late. 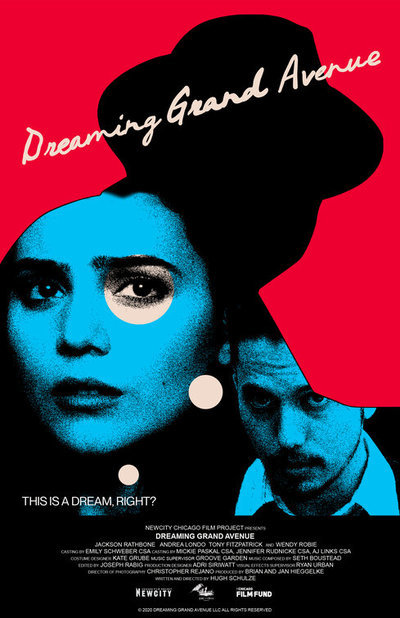