A funny mean streak runs through the promising coming-of-age thriller “Don’t Tell a Soul,” a horror story about two brothers whose abusive relationship is inevitably tested after they steal some money and trap a witness to their crime in a well. That mean streak is, as you might imagine, the emotional glue that keeps shy Joey (Jack Dylan Grazer) stuck to his vicious brother Matt (Fionn Whitehead), who pressures Joey into sneaking into an elderly neighbor’s home (while it’s being fumigated), and stealing $10,000 from a cookie tin.

What you might not expect from “Don’t Tell a Soul” is a giddily cynical streak of black humor that also defines Joey’s unusual relationship with Dave Hamby (Rainn Wilson), the security guard who falls down a forest well after he stumbles upon Matt and Joey’s crime. That sort of edgy, sorta grim sense of humor ultimately defines what works and what doesn’t in writer/director Alex McAulay’s debut, an ambitious black comedy that never goes far enough.

Still, what works in “Don’t Tell a Soul” is often more interesting than what doesn’t succeed, especially if you’re a fan of the sort of comedic misanthropy that defines EC Comics, Jim Thompson novels, or Paul Verhoeven movies. All three of these treasured adolescent touchstones came to mind as I watched Joey try to do the right thing by Mr. Hamby despite Matt’s cartoonishly dickish influence. Joey tries to feed, medicate, and even chat (via walkie-talkies) with Hamby, even though that understandably puts him in Dutch with Matt, who, in a characteristic scene, knocks a glass of orange juice into Joey’s lap (no reason), and sneers: “Clean up in aisle pussy.”

Joey doesn’t like to push back against Matt’s juvenile mezzo-aggressions for a number of reasons, chief among them the boys’ devastated home-life: dad’s dead, and mom Carol (Mena Suvari) isn’t helping much either. She’s unemployed, addicted to pain-killers, and obsessed with grisly local crime news stories. (“Our world…” she sighs before asking Joey to fetch her another diet soda)

McAulay does a fine enough job of showing how this domestic chaos has led Joey to either look up to and/or live in fear of Matt, even after he Matt tells Joey to “call me ‘daddy’” since “I’m the man of the house.” There is, in that sense, perhaps too much time spent gassing up viewers’ sympathies for a character that McAulay thankfully doesn’t turn into a pathetic martyr.

There are even a few scenes where McAulay goes out of his way to show how delusional Joey is, especially when Grazer’s misguided character tries to bond with Hamby, like when Joey asks Hamby if the pain pills he’s been stealing from mom and giving to him are working. “Pain pills can’t fix a broken ankle,” Hamby hisses over his walkie-talkie, only to be cut off by Joey: “You have to say ‘over,’ or it doesn’t count.” Hamby rolls his eyes, but still plays along with Joey, even as his young friend earnestly insists that he shouldn’t take more than two pills since that could damage his liver. “That’s good to know, Joey. Over.”

With that said, McAulay also doesn’t mock Joey with the same vigor that he does Matt, and, to a lesser extent, Hamby. Even Carol, who is literally as white as a sheet, and often gasping for breath, is a bigger target than Joey, which is disappointing, but understandable given how much of the movie’s most viciously deadpan humor is saved for its concluding 20-30 minutes. That’s only annoying because so much of Joey and Matt’s relationship is just dark enough without ever being so messed up that it’s really funny. McAulay seems to know how absurd sibling rivalry can be, especially during its darkest moments, like when Joey exclaims “Jesus!” and Matt sneers “He ain’t here, Joey.” But Joey’s too likable for this type of pulpy tragicomedy: he’s obviously naïve, but only sometimes ridiculous enough to be a compelling antihero (I did, however, laugh aloud at a later line about an unexpected firearm). The proverbial bottom never quite falls out from under him, not enough to make “Don’t Tell a Soul” as wild as it is mean.

But there are a few moments where “Don’t Tell a Soul” is dark and savvy enough to draw you in. As you might expect, Joey and Hamby eventually team up to punish Matt, but somehow, their relationship is even creepier because it’s based on a mutual (or sympathetic) sort of desperation. McAulay brings out the best in almost all of his cast members (Suvari doesn’t have much of a role), but especially Grazer and Wilson, as in a key scene where Joey suggests that they “scare” but “don’t hurt” Matt. The quick, hungry way that Wilson replies (“Exactly”) is suggestive enough to make you wonder what exactly McAulay’s characters are going to do next.

Now on demand and on digital. 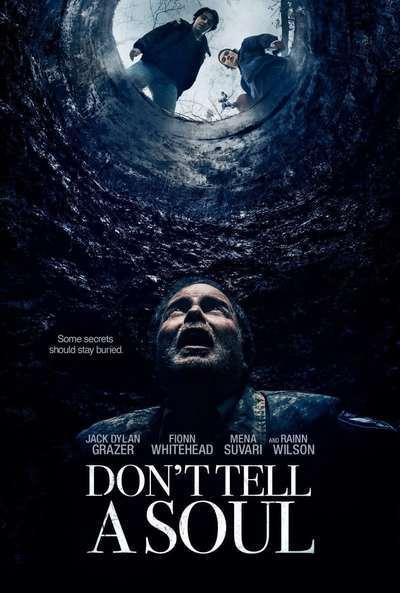