Like someone jamming pieces of better movies together without realizing they won’t quite fit, and then forgetting the best parts, “Don’t Look Back” is almost fascinating in its missteps. It’s constantly threatening to do something interesting, largely because its foundational idea isn’t that bad, but then it never comes through with the good stuff. It has a reasonably strong lead performance for micro-budget horror, but writer/director Jeffrey Reddick can’t come through with the thrills, resorting to cheap jump scares to hide shoddy editing, low-grade cinematography, and the kind of clunky storytelling that’s more reminiscent of a Creepypasta tale than a feature film.

Kourtney Bell goes for scream queen glory (she’s got a few ear-bursters here) as Caitlin Kramer, a woman who is dealt unimaginable trauma after a home invasion kills her father and leaves her clinging to life. Nine months later, she’s scared to leave the house, but her boyfriend Josh (Skyler Hart) encourages her to get out. Of course, her fears were justified, as that day’s jog leads to another tragedy when Caitlin sees a man beat to death in the park. As several people look on, Douglas Helton (Dean J. West) is murdered, and no one steps in.

Before you know it, the press (including a FOX News-esque host played by an uncredited Rainn Wilson) have labeled Caitlin and the others who watched in the park that day “bad Samaritans,” and the brother of the victim, Lucas Helton (Will Stout), reads their names aloud on national TV. As if the national shunning of onlookers who did nothing to save a life wasn’t bad enough, Caitlin becomes convinced there is now some supernatural power stalking them. The man who filmed the attack instead of trying to stop it falls from his apartment, and Caitlin sees a figure in the window. Is someone or something coming for the bad Samaritans?

Clearly, Reddick is working from a playbook he helped write with his script for the first “Final Destination,” uniting relative strangers through an extreme event and then knocking them off one by one. He adds a heavy dose of “I Know What You Did Last Summer,” another slasher classic in which karma comes back to enact gruesome vengeance. But Reddick forgets so many of the elements that made those movies fun. The deaths are bland and almost entirely off-camera, leading to a complete lack of what horror fans used to call “quality kills,” something the “Final Destination” franchise made unforgettable. If you’re gonna line up boring characters and knock them off one by one, can’t you at least make their deaths interesting? Bell commits to her role and Stout isn’t bad, but most of the characters are in this film purely to die, and they can’t even do that in an interesting way.

Ultimately, “Don’t Look Back” plods to a dull twist ending that relies on some truly inept police work (which isn’t even that much of a twist if anyone thinks about the plot for a few seconds), which is then followed by an insanely stupid epilogue twist that honestly lost this movie another half-star, and seems to exist largely to remind viewers of better movies they could be watching. I’ve been meaning to rewatch the “Final Destination” movies for the first time in years and was thinking about doing so this Halloween season. Now they’ll look even better in comparison.

Now playing in theaters and on digital platforms 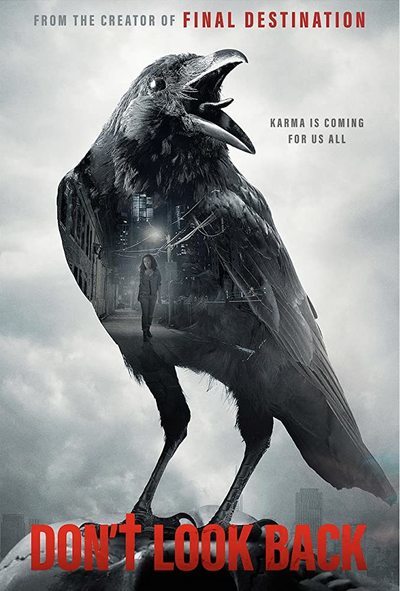 Will Stout as Lucas Helton