"Dolphin Tale" told the extraordinary true story of Winter, a dolphin with an injured tail, saved by the groundbreaking use of a flexible prosthetic tail built to the contours of her body. The tail allowed her to continue to flourish at the Clearwater Marine Aquarium, whose dedicated team of marine biologists and animal rescue specialists devote their lives to helping injured marine life. Director Charles Martin Smith told Winter's story with respect, warmth and care, soft-pedaling any impulse towards anthropomorphism. A sequel might seem unnecessary (except for the fact that "Dolphin Tale" was such a huge hit.) But Smith, who directed and wrote "Dolphin Tale 2", has assembled the same cast of characters (including the actual Winter, who plays herself in both movies), and has created another sensitive and well-observed story about life in the marina, human and animal. The strengths of the first film are here as well. "Dolphin Tale 2" cares about the right things: the details of marine rescue, the dedication of the individuals involved, and the lives and personalities of the animals under their care. "Dolphin Tale 2" tries to do too much, with too many stories shoehorned in, but the overall effect is emotional and sweet.

Dr. Clay Haskett (Harry Connick, Jr.) started the Clearwater Marine Aquarium with the motto: "Rescue. Rehab. Release." Winter's success story helped make CMA famous and profitable, which we now see, in "Dolphin Tale 2" is a blessing and a curse. Winter is big business for the marina and financial decisions start to override the health and well-being of the animals. Sawyer (Nathan Gamble), the young shy boy who bonded with Winter in the first film, is now a teenager, and trains the volunteer staff at the marina. His bond with Winter has helped him understand what he wants to do with his life. Clay's daughter Hazel (Cozi Zuehlsdorff) works at the marina too, and she and Sawyer are still good friends, but maybe puberty has brought something else to the surface. Kris Kristofferson returns as Dr. Clay's father, Ashley Judd as Sawyer's mother, and Morgan Freeman as the thinking-outside-of-the-box prosthetic limb designer, Dr. Cameron McCarthy. Even the feisty obnoxious pelican Rufus has returned, still terrorizing the visitors to the marina. (At the screening I went to, populated mostly by children under the age of 10, Rufus was a huge hit.)

Winter is in trouble again. Her companion dolphin died of old age. Dolphins are social animals and it is against USDA regulation to have a dolphin alone in a tank. Dr. Clay is written up for a violation. An injured baby dolphin, found stranded and sunburned on a sandbar, has been brought to the marina, and the hope is that she can be introduced to Winter's tank. Will Winter accept her? Will the baby dolphin be freaked out by the prosthetic? If the "introduction" doesn't go well, then Winter's future is in jeopardy. She may die, or be moved to another facility. The financial investors in the marina put pressure on Dr. Clay to make this friendship between dolphins happen, because Winter is a cash cow. But Winter is under no obligation to comply with the ridiculous needs of humans. If she doesn't like the baby interloper, she doesn't like her. There are other issues to consider: If the baby dolphin recovers completely, then Dr. Clay has an obligation to release her back into the wild. But then what will happen to Winter? Is it time to let Winter go? There are other animals in recovery at the marina, one being a giant yellow sea turtle, found caught in someone's tossed-away fishing line.

This is a lot of plot. For the most part, Smith guides us through it simply, letting the heightened emotions take care of themselves. Like the first film, he resists making the animals seem like cuddly stuffed animals with human emotions. Dolphins are highly sophisticated creatures but, as Dr. Clay says to Sawyer and Hazel at one point, "Winter is not a pet. She's a wild animal." "Dolphin Tale 2" treats Winter (and all of the other animals we meet) with respect. She is her own thing, she has emotions and thoughts, as all animals do, but they cannot be explained to us, they cannot be revealed. Sawyer is a trusted human in Winter's world. She tweets and beeps at him when she sees him, but still, when she's having a bad day, she won't hesitate to thrash about, knocking him across the face with her hard bottle nose.

"Dolphin Tale 2" works because it immerses us fully in the daily rhythms of the marina. It shows us how things work, down to the most nuts-and-bolts level. Introducing a new dolphin into a tank with another dolphin is almost as elaborate a production as an opera at the Met. It requires all hands on deck. By focusing on the details, Smith helps us understand not only what is happening but the emotional stakes as well. This is no small feat. Schmaltz would be an error with such inherently strong material, and Smith knows it.

There are scenes showing the release process, beautifully shot by cinematographer Daryn Okada, where a fully-recovered animal is set free into the Gulf Coast again. People gather on the beach to watch, holding up supportive signs (as though the animals will find strength in reading them), and there are cheers of triumph when a dolphin is seen joining a school out at sea. The score, by Rachel Portman, is elegant and supportive, rather than intrusive and bossy.

Harry Connick Jr., as Dr. Clay, is troubled and thoughtful, and also a good leader. There is no doubt who is in charge. On the night the baby dolphin is brought to the marina, via ambulance, he shouts to the crowd of volunteers, "When that dolphin comes out of the van, the only voice I want to hear is my own."  It's a very good performance. Nathan Gamble is beautiful in his role, heartbroken that Winter seems to be declining. He is supposed to start looking at colleges but how can he leave Winter?

There's a lot of stuff here to track, maybe too much, but you know a movie is doing what it is supposed to do when you feel a swell of overwhelming emotion watching a giant grumpy-looking sea turtle crawl across the beach back into the waves where she belongs. 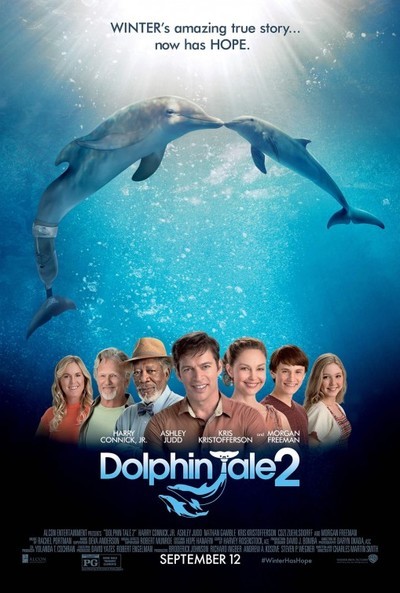