The modern Marvel sequel is as multi-armed as Doctor Strange casting a spell. Think about how many properties are being sequel-ed in “Doctor Strange in the Multiverse of Madness.” It’s a sequel to “Doctor Strange,” although just barely in that you probably need to have seen that film less than the Strange adventures that followed. It’s a sequel to “Avengers: Endgame” and “Spider-Man: No Way Home” in that it references action in both films and extrapolates somewhat on the universe-saving decision that the title character made in the former. It’s very much a sequel to “WandaVision,” the show that expanded the Marvel Cinematic Universe into television. And, for a particular generation, it’s kind of a sequel to when Sam Raimi was one of the most badass filmmakers alive. Perhaps all of these allegiances are at the root of why “Multiverse of Madness” never develops its own identity and depth. It’s a Frankenmovie, a blockbuster sewn together from pieces of other films, comic books, and TV shows and given life with the electricity of a Marvel budget. After a dreadfully long build-up, “Doctor Strange 2” gains some momentum thanks to Raimi’s visual flair, but even that runs out. You really can’t go home again.

Dr. Stephen Strange is attending the wedding of his unrequited love Christine Palmer (Rachel McAdams) when chaos erupts in the street outside (and the fact that Michael Stuhlbarg’s name is on the poster for his single, early-movie scene at the wedding feels like an agent’s coup). A massive octopus-like creature is chasing a girl named America Chavez (Xochitl Gomez) across dimensions, causing chaos along the way. Strange and Wong (Benedict Wong) leap into action to save the girl and learn that America is sought for her ability to traverse alternate universes, although she can’t really control when she does so. Strange suspects that witchcraft may be involved, which leads him to seek the guidance of Wanda (Elizabeth Olsen), who is still reeling from the loss of her children at the end of the Disney+ show and under the spell of the evil Darkhold, a book of evil spells that Raimi fans will probably note looks a lot like the Necronomicon. Wanda is willing to do whatever it takes to live in the universe where she still has her children (although Vision’s existence is barely referenced), which unleashes chaos for Strange, Wong, and America that involves Mordo (Chiwetel Ejiofor), a few classic characters, and, well, some new faces with familiar names.

There’s a sequence relatively early in “Multiverse of Madness” wherein Strange and America fly through alternate universes, including one that looks animated and one where their bodies are made of paint. I got excited. I thought after what felt like an interminable set-up that Raimi and company were about to blow up the Marvel formula machine and make a live-action film that felt like “Spider-Man: Into the Spider-Verse.” Imagine that. A visual artist like Raimi with a modern MCU budget and complete creative freedom.

You’ll have to imagine it because this movie isn’t interested in that kind of potential. "Multiverse of Madness" is a film that constantly pushes back against its own possibilities. It’s got a plot that could have creatively surprised viewers over and over with new variations on the very concept of a world with heroes in it and a director willing to go there. But it's very clearly a product of a content machine, fighting against its own self-interests because it’s scared to alienate any of the millions of potential viewers. The sense that these movies only feign interest in being “strange” when they’re about as normal as can be makes them all the more frustrating. Both “WandaVision” and “Loki” took more creative risks. Significantly.

Which makes it a double-edged sword when the Sam Raimi who directed “Spider-Man 2” and “Evil Dead 2” comes out to play about halfway through and then really gets going in the final act. Without spoilers, “Multiverse of Madness” starts to involve the walking dead, and the Raimi who revolutionized the horror genre proves he still has some life left in him. There are some creatively staged and executed action sequences in “Multiverse of Madness” that only could have been made by the director of “Drag Me to Hell,” and those moments are easily the film’s highlights and almost rescue it. One just wishes it didn’t take so long to get to them and that they weren’t tethered to a movie that too often doesn’t have any idea what to do with that energy.

Instead of letting “Multiverse of Madness” take creative flight, the story keeps coming back to incredibly shallow character traits like Wanda’s grief, Strange’s unspoken love for Christine, or America’s uncertainty about her own powers. None of these resonate. The character arcs here are so remarkably weak that the performances suffer too. Cumberbatch is fine, but he’s a victim of a film that’s so plot-heavy that he’s mostly just running from one CGI sequence to the next. And I’m eager to see what the charismatic Gomez can do with a much stronger character. Listen, I know MCU movies aren’t generally places for deep character work—I’m just saying it’s even more shallow here than normal, especially considering how the typically reliable Olsen nailed this character in her previous outing. It’s sad to see her and the character take a step back instead of exploring the ideas in the show that bore her name.

By the time that “Doctor Strange in the Multiverse of Madness” was pulling out the universe-bending scenes that will probably be spoiled by Friday afternoon, I started to wonder if there’s a breaking point to these CGI orgies that serve so many other properties they forget to be interesting on their own. There have been complaints about MCU properties that feel like they exist merely to get people interested in the next movie or TV show, but it’s never felt so much like a snake eating its own tail as it does here. Or at least the spell has worn off for me. 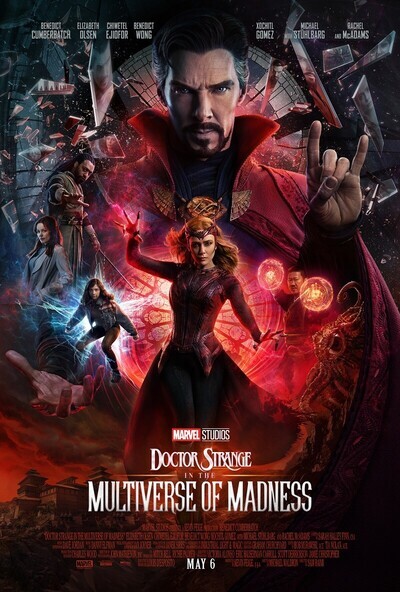 Doctor Strange in the Multiverse of Madness (2022)

Rated PG-13 for intense sequences of violence and action, frightening images and some language.