Despite universal acclaim, I know many people who couldn’t bring themselves to watch HBO Max's “Station Eleven” because of the how close it hit home regarding the pandemic. There may be a similar “too much timeliness” to “DMZ,” a four-part mini-series that starts today on the streaming giant. After all, it opens with evacuees from a war zone being bombed by opposing forces, and then goes on to tell a story against a backdrop of intense struggle and political division that leads to a literal Civil War. The efforts by the creators here to take the base concept of the Vertigo Comics title by Brian Wood and Riccardo Burchielli and spin their own timely tale are admirable, but ultimately a bit too shallow for the talent involved and the restrictions of the format. Directors Ava DuVernay and Ernest Dickerson give the entire production a high degree of professionalism, and there are some fascinating performances in here, but it’s all in service of a story that feels like it’s just getting started when it abruptly ends. It’s a mishmash of half-baked ideas about anger with Shakespearean undertones of family struggle. In fact, that expert craftsman directors and some interesting actors can hold some of this thin plotting and clunky dialogue together at all is a testament to their skill.

Rosario Dawson headlines “DMZ” as Alma, a medic who was separated from her son Christian as the Second Civil War erupted in the United States. Several years later, New York City has become a demilitarized zone between the secessionists and the government-backed side of the conflict. While there is no direct conflict in the Big Apple, the lack of resources or infrastructure has turned the city into a lawless nightmare, where groups fight for power. While Alma appears to have presumed Christian got out and she’s tried to track him elsewhere—exactly what Alma experienced between Evacuation Day and the start of the series is the kind of background the show needed for depth but doesn’t have time to detail—she’s now returned to the DMZ to find a hotbed of violence that feels kind of like “The Warriors” or the video game “Tom Clancy’s The Division” for anyone who has played that smash hit.

However, both that Walter Hill film and that Ubisoft game developed complex worlds that “DMZ” can’t do in only four episodes. The world-building in “DMZ” is very frustrating because there’s so much potential in this concept that feels unexplored since the writing is content to focus on a small group of characters who feel like they never leave a block or two in Manhattan. Alma discovers that an election for control of NYC is about to go down when she gets there and, of course, both candidates have a past with our heroine—this is the kind of show where Alma has a past with almost everyone she encounters, which is just one of its storytelling weaknesses. The head of the Spanish Harlem Kings is a charismatic sociopath from Alma’s past named Parco (a series-stealing Benjamin Bratt), who is willing to do whatever it takes to beat Wilson (Hoon Lee), the leader of Chinatown, also from Alma’s past, of course.

“DMZ” becomes an interesting study in how long a project like this should be. There’s a very tight, character-driven film in this narrative that could have worked at around 100 minutes. And there are also multiple seasons worth of ideas to explore in stories of the people caught in the middle of conflict—it’s not accidental that both warring factions and most people left in the DMZ are BIPOC, and yet this is one of many ideas unexplored in favor of melodrama. As is, “DMZ” feels both too short and too long. It’s too short to build out the world that was needed to make it work and too long to spin its wheels with clunky dialogue about the dynamics between Alma and everyone she encounters for four hours.

And yet there are elements that work when taken individually. DuVernay never missteps and Dickerson reminds one how good he can be with tight, intense tales of desperate men. He gets quite a bit out of Bratt, who conveys a shaky urgency to Parco that can be captivating. This is the kind of man who thinks he’s doing good for his family and people but has no moral boundaries whatsoever when it comes to getting what he wants. And when the show gets action-heavy in the third episode, it makes one want to watch Bratt and Dickerson make a true, brutal neo-noir. Maybe that one could be a movie instead. 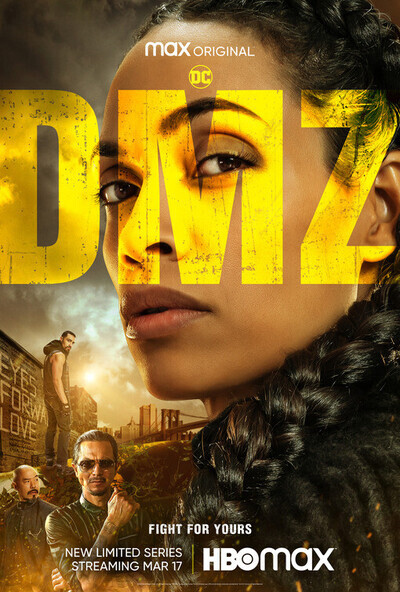