Chances are if you are visiting this website, and are a fan of its namesake, you have an affinity for critical thinking as its own act of empathy. Deconstructing a piece of art is so much more than assessing a positive and negative experience, but a means to help people see what others see. In the case of the equally eye-opening and compelling “Disclosure: Trans Lives on Screen,” this Netflix documentary will undoubtedly help more people understand how transgender people have seen themselves represented in Hollywood—it brings everyone together with its critical eye.

Directed by Sam Feder, this documentary tackles a full history of transgender representation in Hollywood, one that goes back to early silent era films, and includes Bugs Bunny, "The Jeffersons," "The Silence of the Lambs," FX's "Pose" and more. With hundreds of clips, the doc establishes a long history of images for people who are marginalized to this day, but it faces transphobic media with its cutting analysis—as painful as many misrepresentations in popular culture can be, "Disclosure" is an eloquent wake-up call against cliches (sex workers, murdered characters, psychos) and images that have given everyone the wrong idea.

A project like this comes full circle with the clear passion behind it, especially as it tries to reach to viewers by sticking to a talking head documentary approach. Feder makes some vital choices, one of them being that every person interviewed is transgender. When a particular show is brought up for a discussion of its portrayal, the discussion is more about the experience of watching—which can be heartwarming like when actress Laverne Cox talks about discovering “Yentl,” or heartbreaking when actress Rain Valdez talks of watching “Soap Dish” with her family. It's a powerful casting decision too, as if you've seen nearly any of the films talked about here, transgender characters almost only play supporting roles. In "Disclosure," you'll see more transgender faces here (I wish I could list them all; just see the doc) than you might ever get to see in a single Hollywood movie.

Whether or not these interview subjects were a part of the images that are on-screen (like Candis Cayne on her historic appearance on ABC's "Dirty Sexy Money"), they are an intrinsic part of a media history that always comes back to their lives. They have lived with it, it has shaped how they view themselves, and they all have incredibly eloquent things to say about it. It’s also not uncommon for the story to take a moment for someone to reflect on how an image affected them. These moments provide the background that a Wikipedia article could not—this is what it was like to be writer Zeke Smith at a certain age, and to realize that his favorite movie "Ace Ventura: Pet Detective" associates transgender characters with vomiting, along with other titles that are mentioned. The history that is discussed here, that is chewed on, lamented, and built upon, is always personal.

Going through these stories, it can bring up people that I'm sure many would take for granted, like Reno from “The Jerry Springer Show.” Actor Marquise Vilson speaks of seeing Reno’s appearance—someone who was Black and transmasculine in an episode crudely titled “My Boyfriend is a Girl!”—as “really empowering,” and the first time he saw someone like that on television. Sharing with us that he was “high school age, in and out of the shelter system—typical Black queer trans stuff in New York City” when he saw Reno, you instantly get how this image of a supporting character on a daytime TV show was nonetheless seismic for one particular soul.

"Disclosure" wants to factor in so many life stories like Marquise's, and there’s a strong balance of the academic and the first-person, one that overcomes how the documentary doesn't boast a shape, so much as a large collection of references. So while it can feel a little unwieldy, it covers so much—from Lilly Wachowski's thoughts on D.W. Griffith ("a piece of shit") to the positive impact of the Caitlyn Jenner reality series “I Am Cait,” with all the complicated minor victories of representation in between. "Disclosure" makes clear that the conversation about transgender representation is only just beginning, but it offers an incredibly thoughtful opportunity to make more people aware. 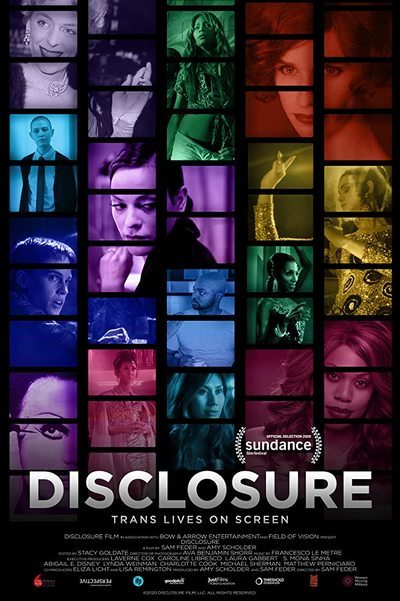