"Dirty Love" wasn't written and directed, it was committed. Here is a film so pitiful, it doesn't rise to the level of badness. It is hopelessly incompetent. It stars and was scripted by Jenny McCarthy, the cheerfully sexy model who, judging by this film, is fearless, plucky and completely lacking in common sense or any instinct for self-preservation.

Yes, it takes nerve to star in a scene where you plop down in a supermarket aisle surrounded by a lake of your own menstrual blood. But to expect an audience to find that funny verges on dementia. McCarthy follows it with a scene where the cops strip-search her and she's wearing a maxi pad that would be adequate for an elephant. She doesn't need to do this. It's painful to see a pretty girl, who seems nice enough, humiliating herself on the screen. I feel sorry for her.

The film basically consists of McCarthy and her half-dressed friends Carmen Electra and Kam Heskin grouped awkwardly on the screen like high school girls in that last heedless showoff stage before a designated driver straps them in and takes them home. At times, they literally seem to be letting the camera roll while they try to think up something goofy to do. There is also a lot of crude four-letter dialogue, pronounced as if they know the words but not the music.

The plot: McCarthy plays Rebecca, who seems well-dressed and with great wheels for someone with no apparent income. She is cheated on by her boyfriend, Richard (Victor Webster), aka Dick, who looks like the model on the cover of a drugstore romance novel about a girl who doesn't know that guys who look like that spend all of their time looking like that. When she discovers his treachery, Rebecca has a grotesque emotional spasm. She weeps, wails, staggers about Hollywood Boulevard flailing her arms and screaming, crawls on the pavement, and waves her butt at strangers while begging them to ravage her because she is simultaneously worthless and wants to teach Dick a lesson. Then, to teach Dick a lesson, she dates scummy losers.

These events are directed by McCarthy's former partner John Asher and photographed by Eric Wycoff so incompetently that Todd McCarthy, the esteemed film critic of Variety, should have won the Jean Hersholt Humanitarian Award for generosity after writing the "whole package has a cheesy look." This movie is an affront to cheese. Also to breasts. Jenny McCarthy has a technologically splendid bosom that should, in my opinion, be put to a better use than being vomited upon.

The Carmen Electra character, meanwhile, struts around like a ho in a bad music video, speaking black street talk as if she learned it phonetically, and pulling out a gun and holding it to a man's head because she thinks, obviously, that pulling guns on guys is expected of any authentic black woman. A scene like that would be insulting in any other movie; here it possibly distracts her from doing something even more debasing. 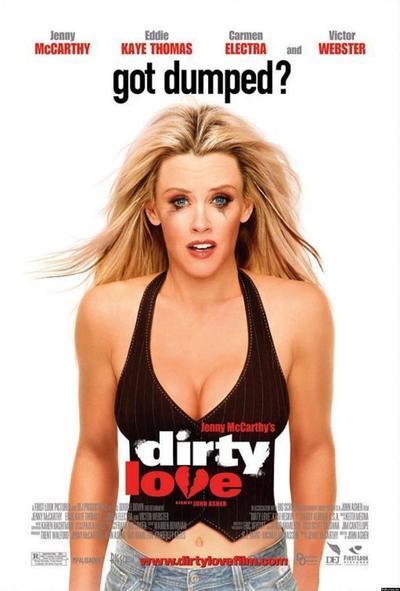 Rated R for strong sexuality, crude humor, language and some drug use