Digging Up the Marrow

At one point in "Digging up the Marrow," a straight-faced mockumentary about a man who discovers another man who claims to have seen real-life monsters, filmmaker Adam Green ("Hatchet," "Frozen") compares his film-within-the-film to a "found footage film." Kane Hodder, the horror icon and man listening to Green's explanation, bristles: "Found footage, huh? Like that hasn't been done before." That exasperated, knowing wink to viewers is a throw-away gag, but it also says more about Green's ambitions (or lack thereof) than he realizes. "Digging Up the Marrow" is a decent idea, but beyond some fun creature effects, and a surprisingly grounded performance from character actor Ray Wise, the film just sits there. Green, who plays a snotty version of himself, doesn't follow through on any of the ideas that make his film stand out. As a result, "Digging Up the Marrow" just uselessly lies there, like a cat during a heat wave.

"Digging Up the Marrow" begins with an ambitious, but ultimately pointless preface. Real-life horror convention guests, like "Toxic Avenger" director Lloyd Kaufman and "Candyman" star Tony Todd, tell Green about their first experiences with horror films, and why they're drawn to the genre. Other convention attendees then admit that they either believe or want to believe in monsters since many of them sympathize with monsters. After this, Green introduces himself by complaining about having to hype himself up ("I already sound like a douchebag"), and ragging on horror fans to his cameraman. Then Green stops clearing his throat, and gets to his film's subject: out of all of Green's fan mail, the most exciting correspondence he's received came from William Decker (Wise), an eccentric retired Boston police officer who claims to have seen real monsters.

Green then wastes a lot of time establishing Decker as an unreliable character. Decker tells us his story in his own time: he's a loner, divorced, highly imaginative, and also happens to have discovered a portal to a secret world of creatures. We sit and listen and wait for more enlivening details to come because, well, Green is at his mercy, and so are we. This wait-and-see strategy allows Green to back-load his special effects budget into his film's too-little-too-late conclusion, which goes pretty much exactly where you'd expect it to. Until then, "Digging Up the Marrow" is a lot of frantic "Did we see something/can we see something" conversations between Green and Decker.

Half of these conversations are interesting because half are carried by Wise's weirdly measured performance. Wise is probably most well-known for losing his cool in "Twin Peaks," a slew of decent B-movies, and a ton of unbearable SyFy Channel movies. But here, he acts like someone you probably know, maybe your grandpa, or that sketchy guy you see on the subway every morning. He talks to Green as if he's pre-planned his end of their conversation, and simply will not abide any interruptions, not now, nuh uh. In true old man fashion, Deck knows what he knows, and that's all that he knows. Wise perfectly conveys that non-philosophy every time he flails his arms in response to Green's constant questioning.

This brings us to Green, the weaker half of the film's central conversations. Green's got an annoying habit of making his character more annoying than they need to be. This was true of the pampered protagonists of his earlier films, especially "Hatchet" and "Frozen," but there's no good reason for Green to be a self-involved jerk in "Digging Up the Marrow." Green takes Decker for granted, and then repeatedly tries to exploit him, making Green a soft target for viewers' disdain. Unfortunately, Green's not supposed to be completely unsympathetic. Rather than commit to the idea that he's the film's real monster, he positions himself as a queasy mix of palatable audience surrogate and boorish human dartboard. There's not a lot to like about Green (as character), but he's in almost every one of his film's scenes, making it impossible to enjoy "Digging Up the Marrow" without enjoying his company.

Green's creative laziness also extends to his film's best idea: Green recognizes himself in Decker's quixotic obsession with monsters. This theme doesn't really get developed. Instead, we get a lot of scenes where Green hangs out with Ray Wise in a dark, wooded cemetery. At first, you can't see much, and eventually, you don't really want to given how drawn-out many of Green's scare scenes are. Worse still, the film's monster-bait sequences all boil down to: "What was that? I don't know! But it might have been something? Oh no, look out!"

There are some effective jump scares in "Digging Up the Marrow," but none are worth writing home about. Wise is easily the best thing about Green's film since he doesn't require any set-up, or pay-off to be immediately unsettling. Here's hoping Green's next film is just 90 minutes of Ray Wise talking to an imaginary friend. 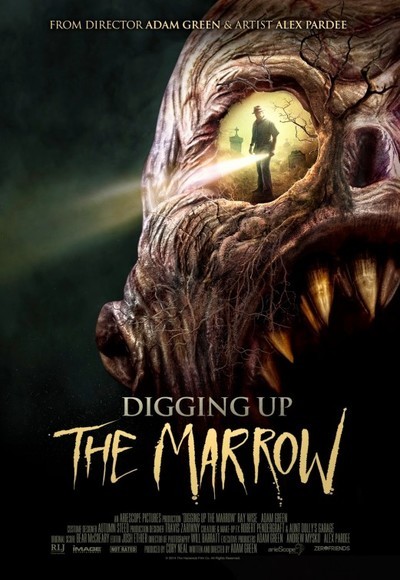 Adam Green as Himself

Kane Hodder as Himself

Mick Garris as Himself