Diane (Mary Kay Place) stops briefly to deliver a casserole to a friend whose husband is recovering from surgery. “It’s your casserole dish I’ve had for six months,” Diane says as she hands it over. The friend hands her a dish she has made for Diane as thanks for all of her help. “This is your dish I’ve had for a year.” We can see right away that the small, snowy Massachusetts town Diane lives in is casserole country, a tight-knit community of people who know everything about each other. They bring covered dishes of food to those in need. One way or another, everyone is in need.

That includes Diane herself. Diane keeps a to-do list to keep track of all the people she has to “do for,” and she spends a lot of time in the car doing it all. She has a cousin Dottie (Deirdre O'Connell) dying of cancer in the hospital and a son, Brian (Jake Lacy), who is abusing drugs. Diane cannot erase Dottie’s lingering resentment over a past wrong. And she cannot get Brian to admit he has a problem and go back to rehab. Casseroles can only do so much.

The members of the community know all of each other’s stories. They gather around kitchen tables trading encouragement, gentle taunts, often-told anecdotes, and updates on who is doing better and who needs some support. Diane goes off by herself to a bar to drink and listen to Leon Russell on the jukebox. The sympathetic waitress cuts her off before she can get too drunk and perhaps places a call—somehow her aunt and friends instantly show up to get her home safely.

This is a first-time narrative feature film from writer/director Kent Jones, a distinguished film critic, scholar and director of the New York Film Festival, whose documentaries include “Hitchcock/Truffaut" and "A Letter to Elia." He has said the story was inspired by his own family of aunts, uncles, and cousins who “do for” each other. But he has clearly also been inspired by the character actors in the films he has studied.

Character actors are stuck with the exposition while the stars get the witty dialogue. They have to get it right every time so the director can use the stars’ best take. They are the Dianes of acting, the “do for” people of cinematic storytelling. And this movie is not just a tribute to the characters who are solid citizens, like Diane; it is a tribute to character actors who portray them. Kent has assembled a superb group of character actors here, who tell lived-in stories with extraordinary sensitivity and grace. The cast includes “I know I’ve seen her before” faces familiar to people who know the films of the '60s and '70s, like Andrea Martin, Glynnis O’Connor, Joyce Van Patten, and Oscar-winner Estelle Parsons—all old pros who bring every bit of life experience to their acting and their faces, too. It is a great pleasure to see actors who know how to use every bit of their real, unfixed faces to show the subtlest details of thought and emotion.

As a mood piece and character study, the narrative is uncertain and sometimes abrupt. But the focus is on the glimpses of Diane’s life, sharply criticizing a volunteer at the soup kitchen for being rude to someone who asked for more food, with difficulty, accepting help from someone else, feeling guilty about a betrayal that her cousin and son are still hurting from, listening to Chick Corea, and writing poetry.

Kent has said that he cast Place in the role after seeing her in “The Rainmaker,” a small part as a grieving mother. When that film is on cable, I make a point of watching just her big scene, which is performed with exquisite sensitivity. I used to think, as I watched, that I wished her character could have a whole movie. Apparently Kent thought so too. Place is a marvel, showing us the longing Diane can barely acknowledge to herself, and how her devotion to others is both rooted in genuine kindness and an effort to expiate the sin she says is constantly whispering, “Don’t forget me.” For us, it is Diane herself, as Place portrays her, who is unforgettable. 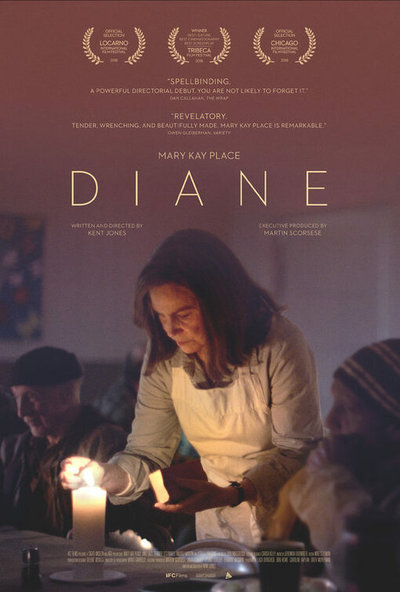