From the beginning, the "Dhoom" films have invited comparison to the "Fast & Furious" franchise, with John Abraham's charismatic villain/antihero in the first giving way to Hrithik Roshan's even more charismatic variation in the hugely successful sequel. One feature unique to the "Dhoom" series, though, most decidedly continued in the third and latest installment, is the ostensible heroes—tough cop Jai Dixit (Abhishek Bachchan), and his crook-turned-cop partner Ali Akbar (Uday Chopra)—being mentioned secondarily, if at all. In the first film, John Abraham was simply more interesting than they were, but over time, the series has evolved consciously into an exploration—between action sequences and songs—of the antihero as an archetype, with bigger and bigger stars cast. In "Dhoom: 2," it was Hrithik Roshan, and now, in "Dhoom: 3," no less a worthy than Aamir Khan.

Movie stars were originally called stars for the bright, glittery aspects of the heavenly bodies in question, but there's another quality that true stars, especially those of Aamir Khan's caliber possess, which is gravitational pull. "Dhoom: 3" doesn't attempt to resist this force in any way, with only the bare minimum of pretense that the "Dhoom" movies are Abhishek Bachchan/Uday Chopra buddy comedies anymore, putting the focus squarely on the story of Sahir Khan (played as a child by Siddharth Nigam and as an adult by Aamir Khan), a circus performer seeking revenge against Anderson (Andrew Bricknell), the cruel banker who ruined his father's life's work for no good reason.

Once Sahir reaches adulthood, he begins to systematically target branches of Anderson's bank, each time causing hundred dollar bills to rain from the sky, and escape using an array of skills, from sleight-of-hand to motorcycle racing. At each robbery, Sahir leaves a message in Hindi and a clown mask, which leads the Chicago police to bring in Jai and Ali so Jai can frown at things and Ali can flirt embarrassingly with the flower of Chicagoan womanhood. Jai initiates a game of cat-and-mouse with the master thief, thinking that his ego will lead him into a mistake out of pique, but Sahir effortlessly turns the tables on the police, turning them into unwitting allies.

The moment at which Jai realizes he's been had immediately precedes a game-changing (to put it mildly) twist, which shouldn't be spoiled. The second half of "Dhoom: 3" features a surprisingly adroit, if not terribly subtle, interrogation into the the morality of operating outside the law for a good cause. The movie stacks the deck a bit by having the banker be such a loathsome (and implicitly racist) bastard, but Aamir Khan and Abhishek Bachchan do a compelling job exploring the various moral and ethical colors involved in the cops-and-robbers game. Khan brings out the best in Bachchan as an actor, with his performance in "Dhoom: 3" finally shorn of the awkwardness and dullness into which his work in the first two movies all too often regressed. This, again, is a testament to the control Khan exerts over the movie: never heavy-handed, but absolute.

There isn't quite as much of Katrina Kaif as one would like in "Dhoom: 3," if one is partial to Katrina Kaif (I have to confess a complete lack of impartiality when it comes to Ms. Kaif, who is a sublime presence), with her role limited for the most part to two stunning song numbers, and something of a truncated romance subplot. There isn't a lot done with the movie's other featured female character, the Chicago policewoman with whom Jai, if the movie was concerned with its "heroes" at all, would likely have had a romantic subplot. As it stands, most of Australian actress Tabrett Bethell's screen time is spent laughing at Uday Chopra, whose antics are kept beneath the threshold where they might damage anything.

"Dhoom: 3" has—by far—the best action set pieces of the series. All the films borrow (to be generous) liberally from other movies, and "Dhoom: 3" picks some nifty sources, with everything from "The Blues Brothers" cop-car pile-ups to Christopher Nolan's "The Prestige" showing up for a salute, though the three main motorcycle set pieces are mounted with sufficient skill as to render them beyond complaints of stealing. If "Dhoom: 3" lacks anything beyond overlooking its women characters slightly, it's the feverish insanity that made "Dhoom: 2" such a delight. But these are small quibbles with what is otherwise an enormously satisfying blockbuster and a splendid continuation of the "Dhoom" franchise, which really is to an uncanny degree an exact dead ringer for a Bollywood "Fast & Furious" saga.

The Boy from Medellín 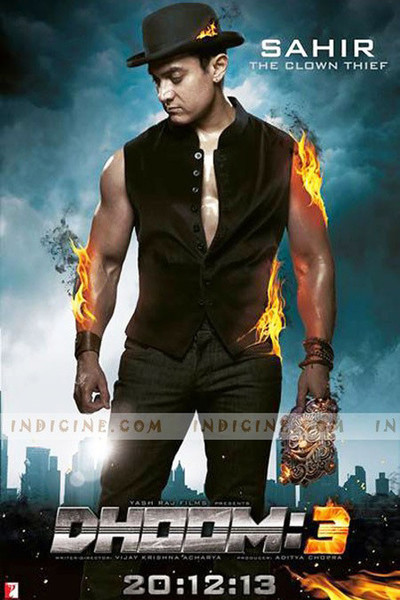