Taiwan’s “White Terror” is considered one of the darkest chapters in its national history.

Across this 40-year period of authoritarian rule, thousands of citizens were imprisoned and executed by the country’s repressive Kuomintang (KMT) government on suspicion of political dissidence. Civilians were ordered to inform on one another, and families torn apart; the general sentiment expressed by authorities was that it would be better to round up one hundred innocent people than let one guilty party go free. Leftists, elites, and intellectuals were targeted out of fear they’d sympathize with communism or otherwise resist KMT rule.

The Taiwanese government has never issued an official death toll, and its textbooks largely omit mention of the White Terror. Though Taiwan democratized in 1987, this erasure has contributed to the sense of a nation that has yet to reconcile with its past. Set in 1962 Taiwan, John Hsu’s spine-tingling “Detention”—part jump-scare generator, part political allegory—carries into its hybrid theatrical/virtual release the unusual thematic burden of righting that historical wrong.

That it aims to do so feels like a particular occasion, and sets the film an admirable (if unenviable) challenge, given how infrequently the White Terror has been depicted on screen. One notable exception: Hou Hsiao-hsien’s Golden Lion-winning “A City of Sadness,” a 1989 masterpiece about the period. But the atrocities of the White Terror were manifest and multi-layered, which explains the appeal of exorcizing its demons through horror. Jayro Bustamante’s masterful “La Llorona,” from last year, threaded a similar thematic needle, reimagining its titular weeping woman as a force for truth, justice, and reconciliation in post-genocide Guatemala.

And in adapting Red Candle’s survival-horror video game of the same name to make his directorial debut, Hsu’s film—which won in five categories at the Golden Horse Awards, Taiwan’s equivalent to the Oscars—moves fast to set up the story’s historical context, openly choreographing its lofty ambitions as both a supernatural thriller and an overdue reckoning.

A wistful, dreamily lit prologue introduces Wei (Tseng Ching-hua), a high school student who’s crushing on classmate Fang (Gingle Wang). Discreetly, Wei is involved in an underground literary club, meeting with classmates and two teachers—Miss Yin (Cecilia Choi) and Mr. Zhang (Fu Meng-Po)—to discuss politics and poetry. Fang, we learn, nurses affections of her own for Mr. Zhang, though this too is playing out in secret.

From there, the action shifts suddenly to follow Fang and Wei—switching between them as point-of-view characters—as they awaken inside a surreal, purgatorial version of their school, with no memory of how they got there. In this nightmare realm, the night is unbroken, faceless ghosts roam the corridors, and deformed monsters in KMT uniforms lurk around every corner. It’s a disorienting change of pace from the film’s subdued opening scenes, and deliberately so.

Dropping his audience into a nightmarish unreality of shadows and specters, Hsu waits until the second act to double back and explain why the students are being haunted. But as flashbacks bring the bigger picture into focus, revealing the fate of the club’s members as well as the political and romantic tensions that precipitated their betrayal, “Detention” eventually sets about fitting its puzzle pieces together.

Elegantly directed by Hsu, the film is lensed with a moody, expressionistic glow by his director of photography, Chou Y-Hsien. Wang Chih-cheng’s detailed production design and Luming Lu’s unsettling strings score, too, are both of an unusually high grade, which goes a long way toward establishing the school’s otherworldly atmosphere. The editing, by Shieh Meng-ju, is several degrees less inspired, making “Detention” something closer to a studio product with its over-reliance on fast cuts and jump-scares; this feels more like a commercial decision than a creative one, but it has the unintended effect of making a convoluted narrative even messier.

And yet “Detention” falters most in its characterization. Whereas the game it’s adapted from was a sweeping tragedy, gradually revealing its terrors to be extensions of Fang’s tortured headspace, the combination of Hsu’s non-linear narrative and the unconvincing CGI monsters deny his film that level of psychological intimacy. The former decision, especially, makes Fang and Wei feel for too long like anonymous audience avatars, given that the third-act twist hinges on dramatic reveals involving their characters; cross-cutting between the two timelines similarly undercuts the first act’s creeping tension, given that we have little reason to invest in Wei and Fang’s survival. For all the game’s attention to the ways fear can become rooted in personal and collective psyches, this adaptation feels curiously depersonalized.

Why is it so difficult to adapt video games into films that can match their stories’ momentum and impact? The answer might lie in the question. Requiring players rather than audiences, horror games such as “Silent Hill,” perhaps the clearest influence on “Detention,” are at their best visceral exercises, constructing scares through a sense of continuous immersion.

Controlling characters directly, players proceed through these games’ opaque, eerily amorphous environments with the understanding that every movement could bring all manner of terrors into their constrained field of view. The player’s consequent caution is externalized by their in-game avatar, deepening a bond with both character and atmosphere in a way that lends itself well to satisfying scares.

Perhaps the decidedly unsatisfying nature of “Detention” as a horror film—for all its Gothic atmosphere, it moves as if along train tracks, letting demons appear out of the darkness without sufficiently priming us to fear their arrival—is a matter of Hsu’s reach exceeding his grasp.

Making his directorial debut, Hsu clearly has an eye for striking imagery, and “Detention” is filled with moments of shuddering, abstract beauty. But his ghost story never quite materializes from its uncanny ether. “Detention” stays trapped there, at an alienating distance—which is cumulatively frustrating, though it perhaps fits a film about a period marked most by violent suppression and terrible silence. 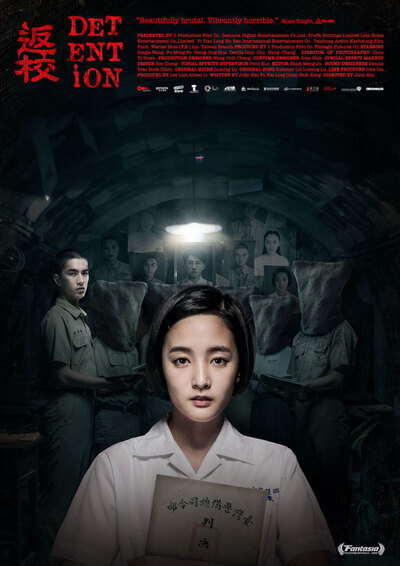