Our cultural interest in still trying to understand the horrors of the Holocaust meets the ticking-clock need to document survivors’ experiences in Claire Ferguson’s documentary, “Destination Unknown.” Comprised of twelve stories as shared by people who survived in and out of the camps, the movie prevails in getting more experiences on tape, some of which have not been told before. But as the film goes from profound life experience to profound life experience, stuck between gathering information and growing art from its themes, the documentary proves to be more noble than notable.

The stories shared here are not connected but they do offer many different perspectives of choosing survival in the face of genocide. A few: Helen Sternlicht talks about being rescued by Oskar Schindler; Frank Blaichman shares personal stories about his time as a partisan fighter; Stanley Glogover offers a story of surviving Auschwitz by chance, and then looking for family years later; Eli Zborowski talks about how he survived in hiding, thanks to the vital humanity of people he calls “angels.”

All of the stories told are harrowing, and the psychology of survival that permeates is profound. It becomes clear that these stories will certainly never lose their immediacy in their horror and heroism, even after the survivors are no longer able to tell the story themselves. By simply gathering the experiences, the documentary does a service to history, and humanity. Here are prime examples of the powerful things, good and evil, that human beings can do for themselves, and to each other.

Director Claire Ferguson and her team accompany these testimonies, captured in talking head interviews made during various recent periods, with a deep archive of footage, photos and film, along with pictures of these survivors from their youth. While everyone shares their own story, some people, like Zborowski, are shown briefly interacting with the places that became so essential to their survival, as he guides us through a small basement nook that he spent endless days in hiding. In the film’s gripping opening, Ed Mosberg is filmed donning his concentration camp clothes and standing in the mirror, before speaking vigorously to a massive crowd about his survival, and the pain he has lived with every day since.

As the documentary goes through its noble cause of documenting these stories, there’s a flatness that makes the project unfortunately unspectacular. Though the archival haul can be impressive and the emotional weight staggering, the documentary puts artistry as its second priority, and struggles to be more than a type of extended video presentation for a museum of Holocaust experiences. The project relies wholly on the the storytelling of its survivors, but its own lack of perspective, or getting to know these people much beyond their traumatizing past, risks compounding their lives into very emotional information for an audience. The stories prove to be far more memorable than the documentary that collects them.

Perhaps that’s why the last couple minutes of the documentary have a massive impact, as they are filled with footage of the lives that continued. “My grandchildren are my answer to Hitler’s final solution,” says proud grandpa and Holocaust survivor Eddie Weinstein, as we see a photo of him smiling with his grandchild by a pool. A flood of more family footage follows, of gatherings big and small. Weddings, birthdays, Sundays. The images reach throughout the decades and are filled with the faces of people we had just seen as aged and stoic. In these moments they are smiling, living the future they chose to believe in. In spite of its shortcomings, “Destination Unknown” has a cumulative power in upholding people who survived by believing in life and love—even after the world presented them a true evil—and succeeds as a deep reaffirmation of the vital importance in choosing humanity. 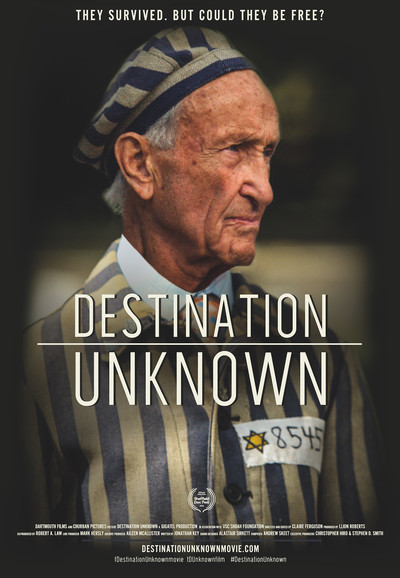