When the studio that gave the world “Paul Blart: Mall Cop” opts to back a torn-from-the-international-headlines socially-conscious based-on-true-events movie, common sense may tell you to head for the hills. So I’m both surprised and somewhat gratified to be able to say that the Relativity production “Desert Dancer,” based on the true life story of a dance performer and underground impresario going up against the repressive Iranian regime and its more thuggish supporters is, while hardly perfect, a movie that frequently displays surprising sensitivity and sensibility.

The first feature from director Richard Raymond, from a script by Jon Croker, “Desert Dancer” gets off on its particular foot by morphing Farsi characters into English ones, and enacting its Iran-based drama with a largely English-born cast, speaking in English. Okay, then; international-headline socially-conscious movies tend to do better business in English-speaking countries if they’re in English. Good thing Iran is such a cosmopolitan country, as it makes the language seem less forced. I’m making a joke, but not entirely—Iran IS a cosmopolitan country even in its current oppressed form. “The home to great poetry,” an opening-text title says (shades of the pre-action apologia for “Argo”). There are ever different currents flowing in its culture, and the movie shows young, dance-crazy Afshin Ghaffarian taken up by one of those currents. Punished at his official school for dancing in front of classmates—dancing, while not officially “illegal” in the country, is highly frowned upon by the “morality police” of particular administrations—Afshin is then invited to attend an underground arts school, where he sees on film for the first time Rudolf Nureyev. He’s then hooked, and when he gets to the University of Tehran about a decade later, he’s ready to hook up with a new group of friends who introduce him to secret dance clubs.

It’s more than just leisure for these young people; the kids are also prominent in the country’s “green movement,” hoping to displace the doctrinaire Ahmadinejad regime with the more liberal Mir Hossein Mousavi. In the midst of all this foment, Afshin dares his new pals to join him in forming a dance troupe. A nifty idea, except none of Afshin’s friends are real dancers. They’re plenty game, though, and they find a practice space in a relative’s abandoned printing plant. And there they are joined, unexpectedly, by another student, the beguilingly beautiful Elehah (Freida Pinto), whose mother was a star in a before-the-revolution Tehran ballet company. The haunted Elehah has massive chops, steely determination, and a lot of baggage, including a proclivity for smoking heroin.

These and other obstacles force Afshin, who’s initially a real wide-eyed “Gotta Dance!” type, to grow up pretty quick. Things get more critical after the 2009 elections, which Mousavi loses, and which triggers a backlash against green movement supporters by paramilitary “basiji,” one of whom, in this story, is the older brother of one of Afshin’s college friends. As the makeshift troupe arranges to stage a performance in the one environment in which there is “no regime”—that is, a desert region almost 100 kilometers outside of Tehran, one of their number is under enormous pressure to betray them.

The movie can get almost as melodramatic as that plot description sounds, but it is also dotted with refreshing moments. Its depiction of the internal tensions in Iranian politics and culture is not what you’d call super-nuanced, but it is sympathetic to Iran as an entity. The performers are all first rate, and Reece Richie is especially good in the physically demanding role of Afshin. Pinto is equally excellent, and her heart-stopping beauty has never been used quite so effectively in a film before, which is saying something. The cinematography is beautiful, and for every two scenes that are obvious on-the-nose thumps, there’s one that is more subtle and affecting; particularly noteworthy is the desert dance that gives the movie its title. 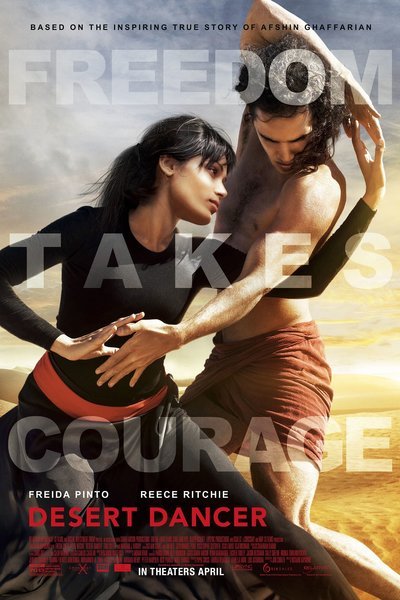 Rated PG-13 for thematic elements, some drug material and violence