The first thing you should know about this movie is that, yup, it really is two hours and twenty minutes long. A fellow reviewer and I were discussing the timing given by the IMDb and we both thought, no way can this probably relatively dinky cops-and-robbers picture be almost two and a half hours. But it is.

“Den of Thieves” opens with some text explaining just how many bank robberies occur in Los Angeles California over the span of one year—broken down by months, days, hours, and minutes. Having rolled out the stats, and they are impressive, the text concludes that “Los Angeles in the bank robbery capital of the world.” Already one feels the movie, co-written and directed by Christian Gudegast, is doing some kind of special pleading. There are four million stories in this naked city, and not all of them can be “Heat,” but this one is KINDA like that, okay?

Indeed, the movie begins with crime that’s committed like a paramilitary operation. An armored car stops at a donut place and an SUV full of masked men armed to the teeth swoop in on it. A dropped coffee sets off a trigger-happy heist man, and a near-massacre ensues. This crew didn’t want it that way, but as its mastermind, Merriman (Pablo Schreiber) glumly notes when they’ve gotten to safety, “Now we’re cop-killers.” And they did it all for an empty truck.

That’s one of the things that Gerard Butler’s “Big” Nick Davis, the major crimes cop on the scene, has to figure out. He runs a half-rogue crew he calls “The Regulators,” and they’re not above kidnapping and torturing suspected perps to get their men. Butler, sporting a slightly unruly beard, plays the role as if he’s imitating Mel Gibson during his drunk driving arrest. He’s crude, boorish, and cavalier. Genre mavens will see where Gudegast, who wrote Butler’s last film, “London Has Fallen” and is making his feature directorial debut here, is pulling his threads from. The Neal/Vincent dynamic of “Heat” isn’t duplicated here; it’s more like the Chance/Masters dynamic in “To Live And Die In L.A.,” in which cop and criminal dealt in the same kind of corruption but the criminal was ultimately the more ethically pure of the two. Thing is, though, “Den of Thieves” never really gets that deep, and turns out not to be all that terribly serious a movie anyway. The various character dynamics are almost a smokescreen for a convoluted heist targeting the only bank in Los Angeles that has never been robbed: the branch of the Federal Reserve where, among other things, old money is destroyed around the same time as the serial numbers attached to it are erased.

The plot thickens ... and thickens ... and thickens. Gudegast is clearly an avid student of heist pictures, and he layers this one with a lot of spectacular complications even while he muddles the average viewer’s potential rooting interest. As charismatic as Schreiber’s gangleader and the criminal lieutenant played by Curtis “50 Cent” Jackson can be (Gudegast engineers a scene involving Jackson’s character’s daughter going on a prom date for a comic-relief “dad gives the date a talking to” scene), they’re still guys who blew away almost a dozen cops in the opening scene, so the suspense when they’re finally inside the Fed building and almost pulling things off is potentially slightly compromised. As for Butler’s Nick, yeah, he’s consistently asking for a spanking to say the least. But where Gudegast really shows his hand, if you’re in the mood to stay ahead of this movie, is in the casting. There’s one character, played by an actor of star-quality charisma, who keeps getting put off to the side in the story, and you have to wonder why. Once you’ve decided why, you can figure out at least one of the twists. And of course, the actor, who I won’t name, is winning enough that you suddenly understand exactly where your rooting interest was supposed to have been all along. 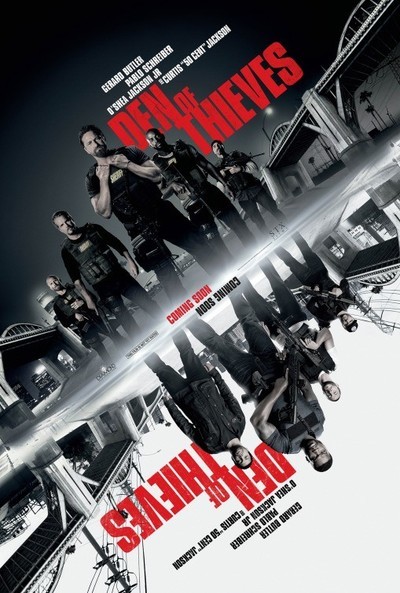 Rated R for violence, language and some sexuality/nudity.