As far as action movie sequels go, the new Scott Adkins martial arts vehicle “Debt Collectors” is sadly more like “Beverly Hills Cop II” than “Another 48 Hours.” Which is a shame, because there’s nothing especially complicated, nor essential about “The Debt Collector,” a light, but very mooky buddy action-comedy that often feels like the kind of self-loving Valentine that the sunny man-child antiheroes from “The Nice Guys” might produce if they made a movie about their lives. “Debt Collectors” is only a bit more where “The Debt Collector” came from: this sequel has all of its predecessor’s eccentricities, but none of its breezy confidence.

“Debt Collectors” is a step back for Adkins and director/co-writer Jesse V. Johnson, who have collaborated on some of Adkins’s most ambitious recent vehicles, like the deliriously pulpy revenge drama “Avengement” and the over-the-top post-Indochina War period beat-em-up “Savage Dog.” To be fair: even the best Adkins projects have more personality than polish, though their action set pieces are consistently strong. But “Debt Collectors” is the first of the Adkins/Johnson collaborations to be distractingly self-conscious, especially when the title characters, French (Adkins) and Sue (Louis Mandylor), try to explain why and/or how they’re teaming up after their last outing’s seemingly conclusive finale (SPOILER alert: somebody gets shot to death at the end of “The Debt Collector”; he comes back in “Debt Collectors” anyway). Nothing from “The Debt Collector” plays as well in “Debt Collectors,” not the one-liners (Don’t call him “Mr. French”!), the humorous asides (they still like sex and cars), or the bargain bin melodrama (family is important, ’n stuff).

On the one hand, “Debt Collectors” is designed to call back to and therefore appeal to established fans, so it probably won’t displease its ideal viewers. The movie’s action scenes are also decent, though the best fight scene isn’t nearly as good as the John Carpenter movie it pays tribute to (you’ll know it as soon as you see it). On the other hand: that doesn’t mean there’s much to the movie’s episodic narrative, which follows French and Sue as they talk a lot of smack, and get into other fights while trying to collect hefty financial debts. They eventually run into shirt-free mob boss Molly X (Ski Carr), whose beef with the boys narratively connects  “The Debt Collector” with its sequel. But while Carr’s fine in his part, his character, much like the plot of “Debt Collectors,” feels like an afterthought since he’s just a walking excuse to re-unite Adkins with Mandylor.

In spite of this, there are some noteworthy flashes of personality throughout “Debt Collectors.” There’s the film’s opening scene, which not only gives Adkins and Mandylor a dramatic and well-choreographed lead-in intro, but also a decent transition to a fun pub brawl that’s scored with a surfing guitar and preceded by an endearing rant about how the Brits only lost the Revolutionary War because, uh, we had back up (“You had help from the Spanish, the French, and oh yeah, the Dutch”). There’s also a bloody, and well-mounted boxing gym fight, and a few inspired moments of seemingly improvised humor.

Unfortunately, most of the dead air in “Debt Collectors” is too thin to be cute. Adkins and Mandylor’s locker room posturing is bewildering and unpleasant, like whenever the boys half-jokingly boast about their sexual exploits. Sue flashes back to one conquest, who unexpectedly pegs him (because ha ha, surprise sodomy) right before French insists that, in his case, size doesn’t matter: “I'm not a small man, Sue. I'm no thorough-bred stallion neither, but it's a perfectly healthy size, alright?”

These ostensibly humorous scenes aren’t well-directed, lit, or edited, which makes it even harder to enjoy Johnson and co-writer Stu Small’s macho banter, like when an ex-lover describes Sulinski as “a jigsaw puzzle with a couple of the pieces gone wrong.” He then tells her that “your lips still look magnificent,” and she blows him a kiss. These gestures might have meant something on the page, but they’re meaningless on the screen, because the actors have no chemistry, and the material that they had to work with was probably always a non-starter.

Look, sequels are tough, as most genre movie fans know. It’s hard to get your fans to suspend their disbelief, especially when you’re actively encouraging them to remember past glories. Unfortunately, there’s not enough gas in this movie’s tank to liven up the scene’s most distinguishing moments, not when Sue talks about “the best f**k on the West Coast” ("Crazy ones usually are, amirite”), nor the movie’s chaotic shoot-out finale. Adkins and Johnson have already done everything else that makes “Debt Collectors” special. Maybe the next sequel will be stronger. 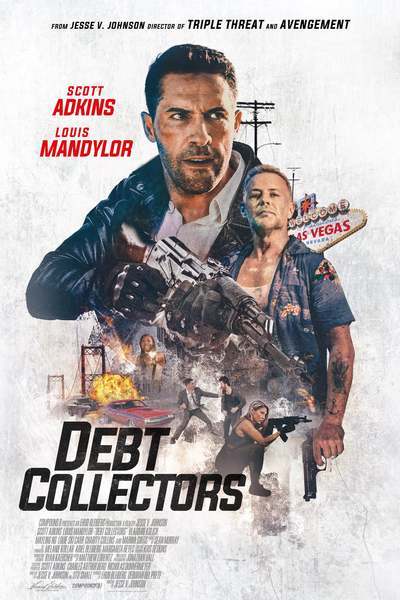