The trauma undergone by the Russian people over the past 150 years or more is impossible to humanly comprehend. It’s like a black hole of suffering and dysfunction. Hell, just by saying "150 years" I could be lowballing things. The Russian situation is so sufficiently monumental that if you ever think you’ve got a handle on it, you will be proven wrong in short order.

For instance: the 1962 massacre in Novocherkassk, in the southeastern corner of Russia, at which between 26 and 80 persons were killed for peacefully protesting hikes in food costs with no concurrent raises in wages. This atrocity occurred in what was supposed to be a “thaw” in the Soviet Union, with Stalin’s successor, Nikita Khrushchev letting up a little on the repression. And yet.

The event remains controversial in the non-Soviet, still-dysfunctional Russia of today, with a true reckoning complicated by factors such as the secret unmarked graves of some of the victims. With frequent latter-day collaborator Elena Kiseleva co-writing the script, director Andrei Konchalovsky takes an unusual tack in depicting the massacre for “Dear Comrades.”

Yuliya Vysotskaya plays Lyuda, a middle-aged Communist Party functionary in the district, who’s having an affair with a local KGB op, the handsome, glib Loginov (Vladislav Komarov). Like the rest of their comrades, they’re annoyed by high prices and such but their status means they can cut ahead in certain lines at least. Her teenage daughter Svetka (Yuliya Burova) finds things at her job a little less cushy. Her job, in fact, is at the Electromotive factory, which is where the protests leading to the massacre will originate.

Lyuda’s a real piece of work, especially seen through Western eyes. She believes everything’s gone to hell since Stalin died. No, really. “If Stalin were alive, we’d be living under communism already,” she shouts at one point. One thing Americans in particular don’t really get about supposed “communist” countries like Russia in most of the 20th century, and Cuba, is that their systems never self-presented as ideally communistic—rather, the ostensible “revolution” was a work in progress, the ultimate fulfillment of which would be the much-bruited “dictatorship of the proletariat” accompanied by world revolution. Because communism doesn’t work in a world where capitalism exists.

Svetka and her own comrades are less concerned with achieving revolution than eating, and so the walkout begins. In Lyuda’s world of party meetings, familiar accusations are thrown about: the protesters are hooligans, gangsters, exploiting a “temporary hardship,” and ought to be stamped out.

When the massacre starts, the party members are stuck trying to leave the factory. The whole confrontation is seen through Lyuda's eyes, crawling to safety even as one of her own gets struck by a stray bullet. She survives, but she can’t find her daughter.

So begins a harrowing and revelatory journey, one that scours Lyuda’s soul. Imagine Costa-Gavras’ film "Missing," only the parent searching for their child bears actual culpability for their disappearance.

Because it’s shot in black and white, and in the Academy ratio, and features a strong female as its central character, this movie has invited comparisons to Pawel Pawlikowski’s 2018 “Cold War.” But that movie was an allegory, while this is a more grounded historical drama. It’s strikingly made and absorbing, but there’s no compelling reason for its formal shape, which makes it look like a product of the Czech New Wave—it’s not flashy enough to resemble early Skolimowski or Polanski.

“What am I supposed to believe in, if not communism,” Lyuda asks near the end of the narrative. But she doesn’t cry or moan; as frantic as she gets on her search for Svetka, she never melts into a sentimental puddle. It’s more of a practical question in the end. “Dear Comrades” is a fascinating, irony-steeped portrait of a soul who’s been hardened by her trauma, to the extent that she embraces its architects.

Now playing in a week-long virtual run at Film Forum. 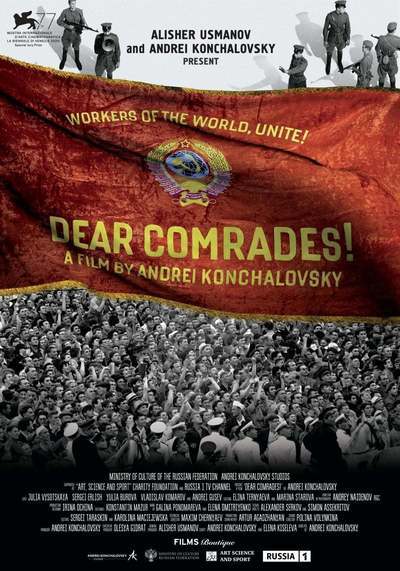