In case you've never had to deal with idiots, let me tell you, it can be tough. They wear you down with their incessant, well, idiocy. Professional comedian Max Morris (Jeff Garlin) has to deal with a particularly annoying subspecies of idiot: the parents involved in a children's baseball league. They're a cross-section of America's stupidest, from the affable idiot (Richard Kind) who drones on and on, to the obviously down-on-his-luck loser who pretends to be rich (Fred Willard). Then there's the scary guy (Steve Agee) who won't interact with anyone and has the simmering rage of a potential spree killer.

Fascinated by this group and frankly bored at sitting in the stands trying to be a good father to his terrible-at-baseball son, Max decides to interview the parents and coaches in the hopes that he will find material for a movie.

Hmm, comedian Jeff Garlin, whose work draws on his personal life and who was a regular on "Curb Your Enthusiasm," which starred Larry David playing "Larry David," portrays a comedian doing research for a movie. How long did it take to work up that premise?

Garlin, in his directorial debut, is aiming for something in the tradition of Christopher Guest's ensemble faux-documentaries, movies like "Waiting for Guffman" and "Best in Show." Guest pulled off a neat trick: he made narrative films that looked like documentaries but had an underlying plot (think of the neat twists late in "Waiting for Guffman" or the dramatic tension in "A Mighty Wind") By contrast, Garlin has made a film that looks like a regular old narrative about a guy getting to know the other parents in the baseball league, but it's really an excuse to give a bunch of terrific actors a chance to riff in scenes that feel improvised. Unfortunately, the results feel shaggy and unstructured.

More disappointing, the performances just aren't quite as funny and focused as they should be. Willard and Kind are both very funny guys when they are used right, but they both seem a bit at sea here, and their characters never come into sharp focus.

Bob Odenkirk, playing the coach of the team, has a long scene at the copy shop that the character runs. It's  depressing and wonderfully observed. Odenkirk is dead-on as a guy who holds petty grudges and tries to make himself feel important by coaching children. The assistant coach, J.B. Smoove, gets Max to visit him on a day when he's hosting a writer's group made up of the oddest assortment of weirdos you can imagine. Funny? Sort of. Painful? Yeah, a bit of that too.

The women in the cast are under-utilized. Nia Vardalos is given little to do as Max's patient wife, and Gina Gershon and Jami Gertz deserve more screen time. Gershon and Kerri Kenney play a lesbian couple, and there's some genuinely funny stuff when Max describes their house as not seeming very lesbian, then struggles to get himself out of that gaffe. But I longed to see them interact more.

The movie's not terrible. There are funny moments. But it feels self-indulgent and like it's about 75% of the way to where it wants to be. The movie could have ended 20 minutes sooner or gone on for another hour. The last scene, when Garlin's easy-going character finally loses his cool, feels weirdly tacked on, as if Garlin and his screenwriting partner Peter Murrieta realized that they needed something like a climax and banged something out.

Jeff Garlin is a likable guy. He tempers his curdled observations on life with an underlying kindness toward the people he mocks. I'd rather have a beer with him than see this film again. 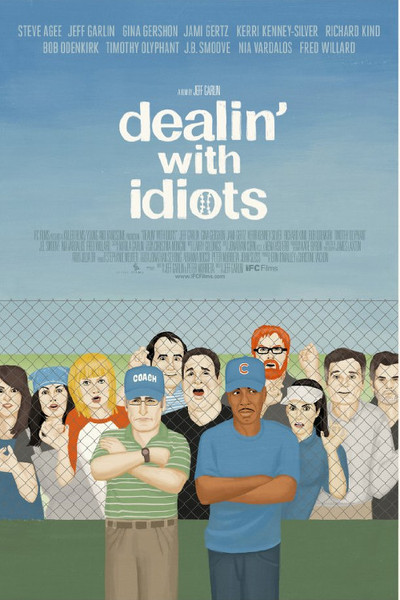