Debut writer/director Amman Abbasi’s tender “Dayveon” finds him tracing the big footsteps of his executive producer, David Gordon Green. Like Green’s own debut “George Washington” before it, this project seeks to find a universal story within a specific environment, while using non-actors and being informed by its very specific people and places. And while the narrative pitch may be familiar (a vulnerable character coming-of-age in an environment of violence), “Dayveon” stands out with its vision, regional flavor and overall personality.

Devin Blackmon stars as the title character, a restless young man in rural Arkansas whose brother was recently killed. The loss has left a void in him that he is uncertain of how to address, sitting in his mobile home as a portrait of his brother hangs over him. Dayveon finds himself pulled between two influences. The local Bloods jump him into their gang early on in the movie, with leader Mook (Lachion Buckingham) taking him under his wing, showing him and his friend Brayden (Kordell Johnson) the various ropes. At the same time, his sister’s boyfriend Brian (Dontrell Bright) tries to reach out to Dayveon, by even offering to be like a brother, although it might be too late.

According to the press notes, Abbasi and Steven Reneaud wrote the script after meeting a lot of people just like Dayveon, Mook, Brayden and Brian. These experiences feel honored by the film’s incredible performances from non-actors, where no one is pushed beyond their natural dramatic nuance, and yet a story develops. A scene in which Brian tries to reach out to a very restless Dayveon is one particular standout moment where dialogue, narrative intention and emotion play out as if the characters knew what needed to be said, but no script was needed to clean it up.

There’s a fascinating way in which the movie was shot that gives it another distinct quality. Using a boxy aspect ratio of 4:3, “Dayveon” has a classic, non-fussy presentation, and achieves a delicate balance of documenting the people and places but never adding its own visual flair. The colors in this movie are tremendous in ways that are incredibly subtle, like how Dayveon’s red clothes pop against the peaceful green surroundings of Arkansas as he walks towards what becomes his first gang initiation. In the best way that micro-budget cinema can, “Dayveon” achieves almost a 3-D effect with how it creates such texture in its lived-in rural settings, making the atmosphere, and the people, all the more tangible.

Abbasi’s movie achieves a strong emotional effect even with camera placement, in which shots are thoroughly composed but not glaring. This is a movie that achieves an incredible intimacy with its characters by giving them so much space sometimes they directly block the camera, as if the clarity of our viewpoint were less important than letting the people in “Dayveon” walk around their world freely. It’s a mentality that more filmmakers should consider, especially ones who strive for the most realism possible while working in creative non-fiction.

These are all elements that make “Dayveon” a movie where characters, not just the title one, are shown in lights we may not have seen otherwise. Bloods members are shown half-passed out, talking to themselves about what the point of all this is; Dayveon and Brayden have a poetic moment learning how to make gang symbols with their hands while sitting by a pond. The movie is full of idyllic passages that strike as human first and foremost, even if Abbasi’s hands can be heavy playing with slow-motion or different film formats.

Abbasi did the music for the film, which might be the moment in which his vision missteps. Echoing the taste of something like “Moonlight,” the score treats various moments with modern classical whimsy. Instead of filling in the rest of the atmosphere as we watch Dayveon either hang with his friends or the gang, it instead feels like a projection of a filmmaker onto various realities. In the most glaring example, a climactic scene at a strip club is accompanied by music Thomas Newman might have written for “American Beauty.” The prettiness of it creates a heavy-handed quality.

“Dayveon” runs like a micro-budget version of the kind of hood movies they used to make in the ’90s, which is just one of its fascinating qualities as it also becomes the results of a filmmaker (who is from Arkansas) going deep into the real life world he is capturing. Throughout, it walks a fine line between his own cinematic daydreams and those of his environment, and the film is electrified by mixing the two. As it becomes a poignant reflection on universal ideas—growing up, of vulnerable men, of the fear of innocence being lost—the movie is special. You have heard this story before, but not in the way “Dayveon” shares it. 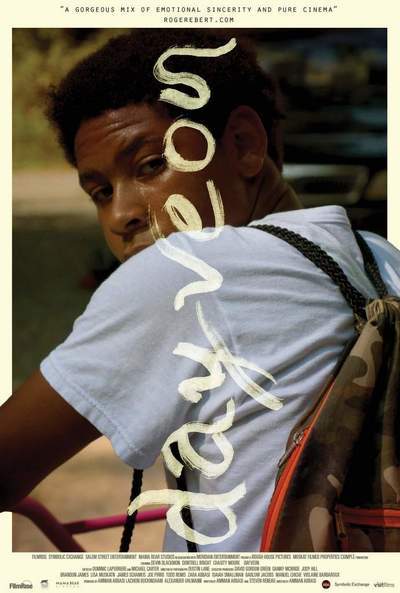