Day of the Dead: Bloodline

I was at Montreal’s wonderful genre festival, Fantasia, last year when I heard that George A. Romero had passed away and I honestly felt my knees a buckle a little bit. Very few filmmakers have influenced me as greatly as the king of the zombies, the man who redefined horror in a way that’s still resonating today. I’m kind of a zombie movie nut, willing to watch even the most negligible title (although, somewhat tellingly, I mostly gave up on the tedium of “The Walking Dead” a few years ago). And so when “Day of the Dead: Bloodline,” a promised retelling of one of Romero’s classic “Dead” films came across my radar, I thought, “That might be a fun way to start the new year.” It’s not.

“Day of the Dead: Bloodline” feels like one of those zombie flicks that was slightly tweaked here and there to resemble the 1985 Romero film but could have started life as any sort of flick featuring brain-eaters. The shared DNA with Romero’s flick is in two key aspects of this new work—the setting of a remote military-run complex after the world has been overrun by the undead and a 'Bub' character who seems a little different than your run-of-the-mill zombie. However, the social commentary that coursed underneath “Day of the Dead” is largely lacking here. While Romero’s film felt like it had something to say about control and the government (even if Roger notoriously didn’t think it succeeded in saying it), “Bloodline” can’t figure out its message, and the characters are nowhere near interesting enough to overcome the muddled themes of the film.

“Bloodline” sets its tone with a hyperactive opening scene that attempts to capture the end of the world. A woman, who we will learn is a medical professional named Zoe (Sophie Skelton), shuffles her way down a street as the zombie apocalypse unfolds around her. Instantly, it’s clear that these are more “Boyle Zombies,” the runners from the “28 Days Later” films than the plodders from Romero’s works. They even have the hand-eye coordination to snatch people off moving bicycles and crash car windows. The world has gone mad.

Cut to “Four Hours Earlier,” where we learn more about Zoe, who is working at a hospital when hell breaks loose. The flashback is mostly designed to introduce us to Max (Jonathan Schaech), a creepy patient of Zoe’s who not only has something unique about his blood but is obsessed with our heroine. How obsessed? Carved-her-name-in-his-arm obsessed. During a party at the facility, Max tries to rape Zoe, only to have a corpse the doctors were examining spring to life and attack him. Suddenly, the office party is going very badly. At least one can say that “Day of the Dead: Bloodline” wastes no time getting to spurting jugulars, consumed intestines, and puking blood.

Cut to five years later, as Zoe is a doctor at a refugee camp, where she works on ‘rotters’ and takes care of the humans who live there, including a high military presence. Of course, she has to go out to find meds for a sick kid, which leads her convoy back to the hospital from the opening scenes. Guess who’s still there? Before you know it, zombie Max has returned to the camp with Zoe and the midsection of “Bloodline” plays out like a weird riff on slasher pics. It’s like “Friday the 13th” with Jason replaced by a zombie and Camp Crystal Lake a refugee camp. There are even slasher pic set-ups like “Hey, go check on the maintenance guy who didn’t show up to do his job,” and Max acts like a serial killer in the way he stalks his prey. It’s not long before Zoe realizes that Max is valuable—her sociopath rapist could be their savior. Ewww.

There are a few well-choreographed action scenes and the makeup work here is actually pretty strong, especially on Max, who seems like a character whose design was influenced by Tom Savini’s breakthrough accomplishments in the first “Day,” and not just in the way he kind of becomes this movie’s ‘Bub.’ The biggest problem with “Bloodline” is that Zoe is just a dull character, both on the page and as performed. So it’s a film that’s ostensibly about objectifying and possessing women that features a personality-less object as the protagonist, thereby creating a black hole at the center of the film. By the time the movie reaches its noisy climax, I think I felt like Roger did about the original movie—that I was just watching people I didn’t care about yell at each other and make really stupid decisions. If you agree with his review, this is actually a pretty loyal remake. 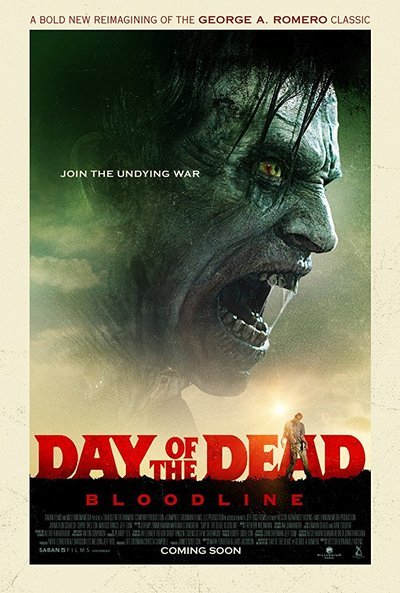 Writer (based on the motion picture "Day of the Dead" by)