“David Byrne’s American Utopia” is a joyous expression of art, empathy, and compassion. It is the intersection of two artists—Spike Lee and David Byrne—who have been interrogating how we connect through art for decades. Thirty-six years ago, Byrne and the Talking Heads made one of the best concert films of all time in Jonathan Demme’s landmark “Stop Making Sense.” It feels like such a gift to get this bookend in 2020 when we often feel like we’re further apart than ever. Nothing makes sense anymore. And here comes David Byrne, a man examining connection and the individual role in community through his incredible music, staging it in a way that reminds us that human expression is our most valuable commodity. Director Spike Lee works right alongside Byrne, bringing viewers into the show with his incredible directing, putting us right on stage with these talented artists, and transcending a mere recording of a live event. Byrne and Lee’s utopias aren't far apart—places where we see one another honestly and truly.

Byrne and Brian Eno wrote the album American Utopia and released it to positive reviews in 2018. However, it was the subsequent Broadway show in 2019 that really gave this project international attention. Playing at the Hudson in late 2019, the show incorporated most of Byrne’s latest album with other songs from his career, including Talking Heads hits like “Once in a Lifetime,” “Burning Down the House,” and “This Must Be the Place.” A hybrid of a traditional concert performance with musical theater choreography and even echoes of performance art, “American Utopia” earned raves on stage, and Lee decided to direct a film version of the show.

“David Byrne’s American Utopia” starts on a relatively barren stage, echoing the simple beginnings of “Stop Making Sense”—fans will enjoy visual beats and choices that seem to recall that incredible show and ask themselves if it’s coincidental or intentional. From the first song, “Here” (actually the last song on the newest album), Byrne is examining connections by literally singing about the human brain. In brief interludes between songs, he makes this quest for connection even clearer, talking about how people meet and the lines between individual and community. Both are so important to Byrne, who values singular artistic expression but also how those expressions form a bigger picture.

That idea is embodied in the show itself, one in which Byrne surrounds himself with an incredibly talented collection of performers, eleven in total, who serve as the “band” for “American Utopia.” They are dancers, singers, musicians, and collaborators—people moving around Byrne in a way that highlights him and creates a larger sense of performance. The choreography is mesmerizing, the musicianship is remarkable, and the sense of joy bursts off the screen. It also changes the music itself into a form of communal expression as most songs have been reworked into layered, percussion-heavy numbers for the structure of the show. Just watching these people rise and fall, joining voices in harmony, and stepping forward for a solo or receding into the background is so artistically inspiring—people at the top of their craft united in song.

Byrne and Lee aren’t naïve enough to think music on Broadway can solve everything. There’s an undercurrent of anxiety and even outrage in “American Utopia.” The first image on-stage that appears other than the artists is one of Colin Kaepernick as the performers kneel, one of Byrne’s longest interludes is about the need to vote, and an amazing rendition of Janelle Monae’s “Hell You Talmbout” comes with images of murdered Black men and women. The whole show is about looking at one another, connecting, and expressing. Byrne’s music and Lee’s craftsmanship work together to shake people out of complacency in multiple ways—find your joy, find your outrage, find something. In a year in which apathy has been easier to slide into, just seeing something this vibrantly alive feels like a miracle.

It’s all there in the lyrics to Byrne’s stunning acapella show-closer, a reworked version of “One Fine Day”. The dancing, singing, playful ensemble has been stripped of their instruments, leaving only the power of their harmonious voices to make the final point: “Then a piece of mind, fell over me/In these troubled times, I still can see/We can use the stars, to guide the way/It is not that far, the one fine day.” It is the individual (“fell over me”), the community (“we can use the stars”) and even the hope for a better future that brings this breathtaking work of art to a close. We can use the stars, to guide the way.

This review was filed as a part of coverage for the Toronto International Film Festival. The film will premiere on HBO on October 17th. 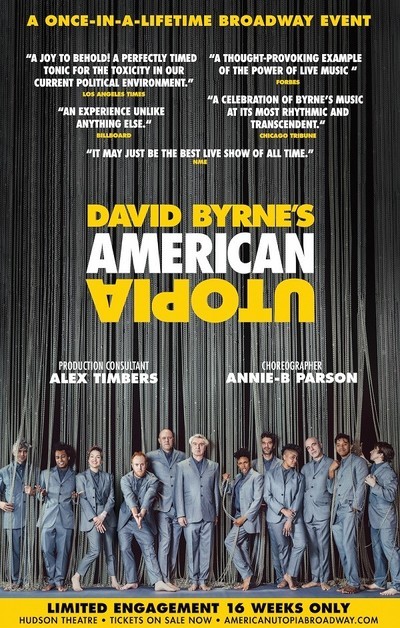 David Byrne as Self