The wild windy landscape of Sardinia - its dunes, rocky cliffs, sandy wastelands, caves - provides the backdrop for "Daughter of Mine," Laura Bispuri's second feature (and fourth collaboration with cinematographer Vladan Radovic, who shot her first feature, 2015's "Sworn Virgins," as well as two of her short films). "Daughter of Mine" isn't exactly an adaptation of The Mistress' Daughter, A.M. Homes' seething memoir about her experience as an adopted child whose birth mother reaches out. It's probably more accurate to say "Daughter of Mine" is inspired by the central event of Homes' book, with a screenplay by Bispuri and Francesca Manieri. "Daughter of Mine" is a family melodrama about a 10-year-old girl caught between two very different mothers. In a hothouse atmosphere of recrimination, blame, and desperation, these three characters circle one another, race towards each other, flee backwards, always in each others' orbit, no matter the imposed distance. The script is very sparse. It feels like an outline, a general idea rather than an actual filled-out story. Because of this, there's a slightly belabored quality to the film. We see where it's going. We see how it's going to go.

In the opening scene, Vittoria (Sara Casu), a pale little girl with bright red hair, wanders through a beachside rodeo, looking on at the grownups at play. She comes across a wild-haired blonde being groped by a man against a fence, and the woman staggers towards Vittoria with intensity and intention. Vittoria flees to her mother's side. Her mother Tina (Valeria Golino) gives her daughter cotton candy, and they walk off together, a family unit. In the following scene, Tina travels out to an isolated farm in the sandy shrublands near the beach, to visit the blonde, a wreck of a woman named Angelica (Alba Rohrwacher). Angelica is about to be evicted from her farm if she can't pay the landlord. The connection between the two women is deliberately vague. Tina and Angelica don't look like sisters. But Angelica and Vittoria sure look like mother and daughter.

The secret is not really the point of "Daughter of Mine". Everyone will guess it early on. The trajectory of the film is Vittoria's, who has grown up in the shadow of a secret. She treks out by herself across the isolated wilderness to "visit" Angelica, without telling Tina where she is going. Angelica spends her days passed out in the dirt, hungover. She spends her nights at a terrible bar, demanding drinks from the bartender, giving quick sexual favors - in full view - so the alcohol will keep flowing. Tina fears Vittoria being drawn into that self-destructive circle. She fears losing her daughter. When Angelica gives Vittoria hoop earrings, Tina acts like it's the end of the world.

"Daughter of Mine" is sparsely populated. The only characters who really appear are the three leads, plus the smaller role of Umberto (Michele Carboni), Tina's baffled husband. (Look for Udo Kier in a small role as Bruno, Angelica's heartless landlord). Without secondary or tertiary characters, the story takes on an abstract quality. Sardinia is reveled in, visually, in its windy blue-skied beauty, but "Daughter of Mine" doesn't take place in the real world. The characters are totemic, rather than three-dimensional. Whether or not this is deliberate is hard to say. In "Sworn Virgins," there was a similar unpeopled quality, the story unfolding in a landscape emptied of everyone except the lead characters. This is not necessarily a negative, but it was more effective in "Sworn Virgins," where the central event - an Albanian woman (Rohrwacher, again) choosing to live as a man - held so much fascination and intrigue.

To some degree, the performances in "Daughter of Mine" fill out the slim material. Golino's Tina deteriorates from a capable woman, satisfied in her choices, to a teary-eyed, desperate mess. Casu is very effective, her alert eyes absorbing the insane adults around her. When her face cracks open in a smile it's almost heartbreaking. Rohrwacher has always been a busy actress, but in the last couple of years, her star has risen exponentially. Last year, she appeared in "Happy as Lazzaro," one of the best films of 2018, directed by her sister Alice Rohrwacher. She provided the narration voiceover in the mini-series "My Brilliant Friend," based on Elena Ferrante's celebrated books. She was excellent in "Sworn Virgins," playing a character who could not be more drastically different from her role in "Daughter of Mine." Angelica in "Daughter of Mine" lives dangerously. This is an uncompromising performance by an actress not afraid to push her work to extremes.

Radovic's work provides necessary texture and atmosphere, filling in the blanks. Much of the film is shot hand-held, the camera lurching after Tina, or Angelica, or Vittoria, as they move towards or away from each other across vast empty spaces, accompanied by Nando Di Cosimo’s rousing score. The landscape is part of the draw, the sunlight and twilight, the echoing caves and crashing ocean. While the film provides glimpses of the Sardinian village where they live, its fisheries and docks, and how all of the characters are somehow involved in the fishing industry, there is no sense that this very specific outer world factors into the main characters' lives. There are a couple of scenes where Tina is seen in church, surrounded by people, but she speaks to no one. Does she have friends? Wouldn't there be gossip about her daughter's origins? This is a small town. Does anyone judge or suspect? Without these important details, the events of "Daughter of Mine" harden into the symbolic (an incident with a pregnant eel is particularly on the nose). The film buckles under the weightiness of the obvious. 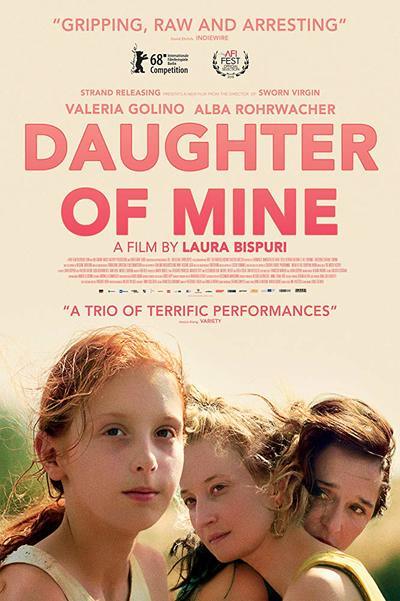