Dark Was the Night

This movie opens at a logging camp, a setting little seen in contemporary cinema. Trees getting cut, woods getting shredded, in a formidable forest framed by intimidating grey sky. It’s the end of the work day, and the men are supposed to be coming in, but a supervisor talks into his walkie talkie; he’s not getting an answer from some workers, and he’s annoyed. “I won’t hesitate to lock you guys in for the weekend,” he says, and he gets no answer, so he goes deeper in to the woods to investigate.

What he sees is not pleasant, and he’s not going to be able to share his subsequent experience with anybody. “Dark Was The Night” is a horror movie, a creepy and atmospheric and sometimes blood-soaked horror movie, and it’s got a good amount going for it. Even though it does split from the novel logging-camp setting to something a little more generic, the small town of Maiden Woods, 90 miles south from the opening unpleasantness. Here, too, it’s pretty grey, and folks aren’t exactly perky. The town sheriff Paul Shields (Kevin Durand) and his new deputy Donny Saunders (Lucas Haas), considered a novelty on account of his hailing from New York City (the picture was shot upstate) have their attention called to some unusual happenings—a cranky stable man’s missing horse most prominently—and eventually see a pattern forming. A pattern that suggests something otherworldly that’s doing a lot of killing.

Director Jack Heller shows a firm grasp of horror movie mechanics, laying on the shocks and the atmosphere with assurance and vitality. Screenwriter Tyler Hisel’s storyline, though, shows an equally firm grasp of some genre conventions that are a bit tired. Shields is estranged from his wife Susan (Bianca Kajlich), seeming to share custody of their young son and quietly refusing Susan’s offer to seek counseling with him. It turns out that their problems stem from the loss of another child (seen in family photographs wearing a red slicker that brings to mind “Don’t Look Now”) that Shields couldn’t prevent. This sets up a whole super-obvious self-blaming-taciturn-father-figure-finds-shot-at-redemption scenario. Donny’s got his skeletons too. This is less tiresome than it might be on account of the sparse dialogue and the excellent acting from Durand and Haas, but it gave me some qualms that I’d sooner not have experienced early on in the picture.

"Dark Was the Night" does, deliberately, build to a tense and sometimes jump-from-your-seat scary climax which finds most of the small town’s residents holed up in the local church, trying to nail down what has by this time been pretty firmly established as a bonafide monster stalking the local woods. And the quest is, it turns out, made more engaging by the guilt and self-doubt experienced by its main characters. As for the creature itself, it could have been pretty ridiculous, but a combination of smart effects design (I believe Danny Shinwoong Kang is the responsible effects person) and cinematic discretion make the damn thing work. And so, too, does the movie itself. 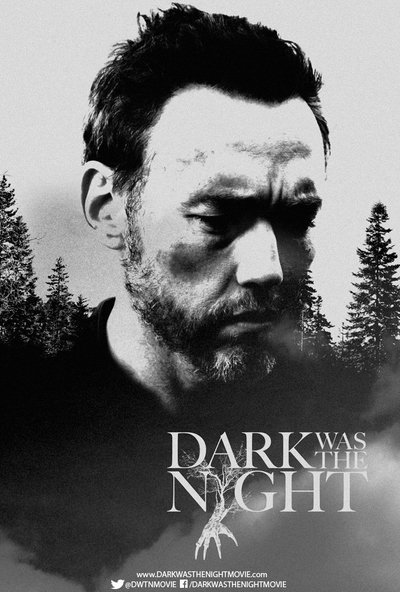