The title alone—“Dark Meridian”—says it all while simultaneously saying absolutely nothing.

The feature debut from writer/director Rankin Hickman is an overly twisty tale of dueling crime families who rule the seedy underbelly of New Orleans. A cop on the take gets caught in between them as night falls and the body count rises.

But what does “Dark Meridian” mean, anyway? It could be a high-octane action flick about extreme sports enthusiasts. It could be a supernatural thriller about hopeful fools who dare to connect with the dead. It could be the new fragrance for men from Paco Rabanne.

What “Dark Meridian” ends up being is a generically violent gang drama full of bad guys standing around grungy warehouses, explaining themselves before shooting each other in the head. Here’s a small sample of dialogue:

Slickly dressed criminal No. 1: “I’ll see you in hell before I call you a friend.”

Scruffily dressed criminal No. 1: “I completely understand. Jacob’s loss must have been devastating.”

Quentin Tarantino, it is not. But Hickman eventually reveals that he has such lofty narrative aspirations, although they never add up to much. He jumps around (too frequently) in time over the course of a bloody afternoon and night, giving us nuggets of perspective before getting greedy with not one but two giant twists.

“Dark Meridian” begins at the end, though, with corrupt detective Spencer Soleno (James Moses Black) dragging himself, panting and bleeding, across the floor of a warehouse that’s the site of much of the film’s action, then shouting a few choice words at the man whose gunshots left him that way. Determining who the shooter really is—whom he works for and who his next targets will be—has been Soleno’s mission all night.

His inadvertent partner has been college dropout Tevi Marek (Dave Davis, whose naturalism is about the only thing this movie has going for it). He’s the youngest son of crime boss Oren Marek (Ronnie Lamarque), who has been paying for Soleno’s protection for years. When the Marek family’s torture of a man suspected of murdering one their own goes horribly wrong—as these things are wont to do in movies like this—Soleno and Tevi must team up to find the suspect. He initially claims he’s an innocent man named Patrick Fox (Billy Slaughter) who was in the wrong place at the wrong time, but his survival instincts suggest otherwise.

“You guys are all the same,” sneers Fox, who’s been tied to a chair and beaten to a pulp by various members of the Marek clan and their thugs. But he might as well be talking about “Dark Meridian,” too. Aside from the time-hopping narrative gimmick, there’s just not much to differentiate this movie from any number of others aiming to wallow in the underworld for cheap thrills.

As a genre exercise, it’s taut and amped up at the expense of character development. It jumps right into the action but proceeds from there in visually workmanlike fashion. It’s crammed with supposedly colorful figures spewing stilted dialogue; even the homeless lady ranting and raving by a trash can fire takes the time to explain her situation. At the same time, though, “Dark Meridian” doesn’t even satisfy as a guilty pleasure that’s so bad, it’s good. Instead, it’s so bad, it’s blah.

Perhaps the most egregious sin of all is the fact that this film has zero sense of place. The back streets, dive bars and underpasses depicted here could exist in any urban area in the United States. When you shoot in New Orleans—one of the most culturally and historically rich cities in the nation—and come away with bland blight, even on a micro budget, you’re doing something wrong. 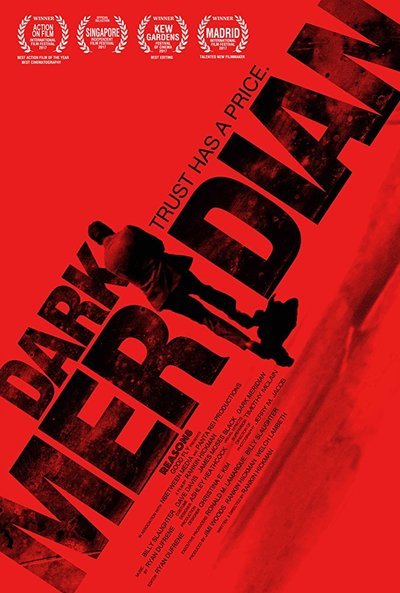