Louise Osmond’s “Dark Horse,” an account of impecunious Welsh villagers who team up to sponsor a race horse that surprises everyone by turning out a winner, has all the elements of crowd-pleasing Britflicks such as “The Full Monty,” “Billy Elliott” and “Pride.” It almost cries out to be a Mike Leigh film starring Jim Broadbent and other members of the director’s stock company.

Even with Leigh at the helm, though, it would be hard for any fictional treatment to beat the pleasures of Osmond's genial, enthralling documentary. The story is one of those real-life, against-all-odds sagas that almost defies belief, yet the most important elements here are the characters. While the film (not to be confused, incidentally, with the recent New Zealand drama “The Dark Horse”) has an abundance of quirky, colorful British types, two stand out in particular—one human, one equine.

The biped is a twinkly-eyed, middle-aged woman named Jan Vokes who works as both a barmaid and a supermarket cleaning woman in the depressed Welsh village of Cefn Fforest. Tending bar one night, she hears a tax lawyer named Howard Davis discoursing on the ins and outs of raising race horses. Horse racing, of course, is a sport that’s belonged to the aristocracy and the well-heeled for centuries, but Jan has a idea. The expenses are more than she could afford, obviously, but what if a group of friends shared them?

She quickly assembles a team of allies, who each pledge £10 per week to the venture. Some of her backers are unemployed, and all know that the odds against any kind of success going up against such well-funded, experienced and tony competitors are high indeed. And Jan isn’t proposing to buy a horse, mind you. She’s starting from square one. A mare must be found, a stud fee paid (naturally, they can’t afford the pricier candidates), and birth awaited.

The colt that results, initially all eyes and spindly legs, looks like it might not even be suitable for racing. But Jan proceeds with her plans undaunted. A trainer is engaged and does his work. The horse, named Dream Alliance (Dream for short), eventually gets entered in a race and astonishes his backers by coming in fourth. But very soon, the real astonishment arrives: Dream wins a high-profile race.

In this doc, as in any fictional treatment of this narrative, that first victory serves as the climax of act one. Act two also climaxes with a big event, which won’t be revealed here. Suffice it to say, though, that the horse’s unexpected success entails problems. Yet those don’t include any divisions or fractiousness among his backers. One of the film’s most resonant pleasures is the friendship and solidarity these unostentatious Welsh folk share; they remain warm-spirited and loyal to each other through thick and thin. And their loyalty extends to their four-legged prodigy as well. When Dream needs some expensive help late in the story, they are ready to put up their winnings, because, they say, the money really belongs to the horse anyway.

As noted, the human brigade has a charismatic leader. In a film comprised mainly of retrospective interviews and news footage chronicling various races and the activities around them, Jan Vokes’ recollections stand out, because the woman herself does. She’s usually filmed leaning slightly to one side, her straight auburn hair swaying as it frames her recurrent smiles; it gives her a merry, mischievous look. Her irrepressible sense of fun—which encompasses realizing her whole enterprise’s absurd improbability—sets the film’s light-hearted, engaging tone.

The film’s equine star, Dream, also seems to harbor reserves of wit and playfulness. As happens with many favored animals, he develops a relationship with the humans around him that leaves many thinking he is communicating with them intentionally via certain looks and actions. Seeing the footage of him, it’s hard not to share that belief. Dream does seem to have a certain self-consciousness, as if his extraordinary, unexpected career on the track was driven by an understanding of those who invested so many hopes in him. He’s certainly a star, and easily one of the most memorable characters you’re likely to see in a movie this year. 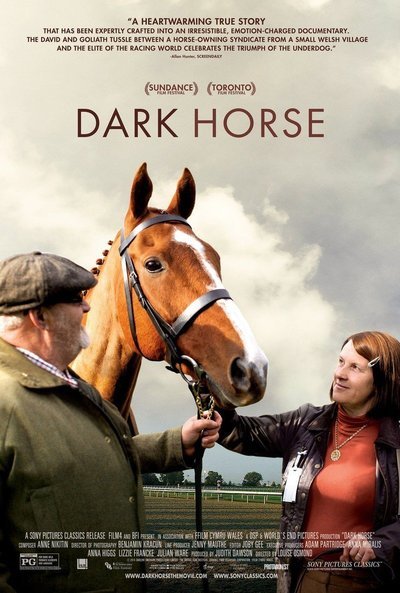 Rated PG for some mild thematic elements and language.