Danny Fields put three of the greatest rock and roll bands the United States (if not the world) has ever produced on the world stage. That’s achievement enough for a lifetime by some standards, Rock and Roll Hall of Fame-worthy by not dissimilar standards. Now, if you actually do not think that The MC5, The Stooges, and The Ramones are in fact three of the greatest rock and roll bands ever, then you may not want to read the rest of this review. “Danny Says” is a documentary celebration of Mr. Fields, a man who achieved quite a lot while never actually settling into a career or even a profession. A man who knew everyone and everything, a man who was always the smartest guy in the room with the most dish on everyone else.

A figure as unusual and distinctive as Fields certainly deserves a commemoration. The bad news here is that he deserves better than what “Danny Says” serves up. The movie, directed by Brendan Toller, is scattershot, sloppy, fake-clever and infatuated with its subject to the point of indulgence. Fields is a fiercely intelligent man whose acerbic wit can cross the line into abrasiveness, to the extent that one can be inclined to lose patience with him. This movie frequently invites a similar frustration, albeit for different reasons.

Fields’ own voice is the dominant one. He appears, looking sometimes rather worse for the wear, in interview footage shot at different times and in different settings (various rooms in his apartment, it seems) but always in a camera setup that’s unimaginative and indifferently shot. Toller tries to liven up the standard documentary mix of interview and archival footage by interpolating animated sequences illustrating Fields’ vivid, ribald anecdotes of sex, drugs, and rock and roll over the decades. Unfortunately, the animated sequences are often even cruder than the interview footage. One such sequence, wherein Fields tries to engineer a liaison between The Doors’ Jim Morrison and Velvet Underground chanteuse Nico, loses its genuine hilarity due to the grotty on-screen graphics.

Toller also fumbles with respect to emphasis. It is interesting to learn that Fields had a hand in the Beatles’ “we’re bigger than Jesus” scandal that nearly derailed the group’s career. But Toller, abetted by Fields, wants to make him the main actor in the affair, with the punchline being that Field’s best friend was Linda Eastman, who would, you know. The story gets strung out far too elaborately here, even if the punchline to the punchline is reasonably satisfying. Some of the voices besides Field’s provide different degrees of added value. Iggy Pop is Iggyish as ever, and Jac Holzman, the erudite and wise founder of Elektra Records, where Fields brought The Stooges and The MC5, implicitly demonstrates how a record man of genius could get a lot of inspiration from a loose-cannon-by-definition such as Fields. (Not that the movie is particularly concerned with examining the music industry with that level of nuance.) Judy Collins, on the other hand, turns up mainly to show the audience that Fields even knew figures such as Judy Collins.

Fields doesn’t recycle many of the scabrous anecdotes that made the oral history Please Kill Me so simultaneously lively and eyeroll-inducing, but he does get off a trademark jaundiced one-liner more than every so often. Remembering how he introduced Iggy Pop to David Bowie, he says, “They started talking so fast about the one thing I hate most in the world … music.” The native New Yorker is also very funny about his California misadventures; “People in California … it was a joke then, but it was true: they did one thing a day.” When he talks about what it was like to be gay in New York in the early ‘60s, or contemplates how many of his friends are no longer alive, Fields fleetingly reveals a side of himself that I wished his interviewers had pressed him on further. The vulnerable side of Danny Fields would be as well worth knowing as his gimlet-eyed self. But the filmmakers have no such interest, and instead press him for another funny story, like he was their favorite rock and roll uncle or something. I certainly hope Fields has a memoir, or a journal, waiting for publication. 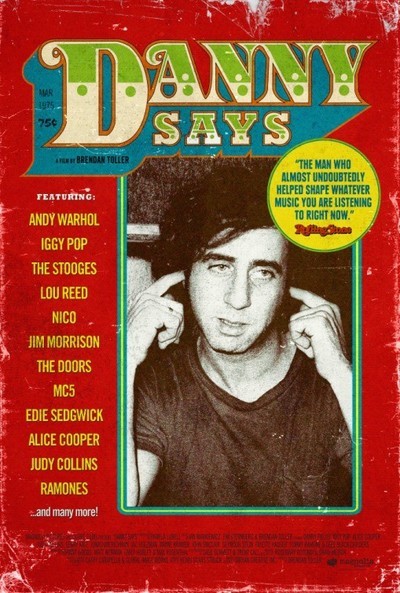