When you come down to it, there aren’t that many fictional characters who truly transcend the age in which they were conceived. Cyrano de Bergerac, based, at least loosely, on a real-life nobleman of the 17th century, was brought to theatrical life by the verse playwright Edmond Rostand in the last years of the 19th century, and remains an enduring fiction.

The character is a man of ferocious eloquence and great physical courage—rendered somewhat ridiculous by his outsized nose. He loves passionately and is not loved in return, and instead becomes the voice of another, his close friend and romantic rival. Variations on the Cyrano scenario have been rife over the past hundred years so—the anti-lookism teen comedy “Sierra Burgess Is a Loser” is a gender-flipped high-school take on Cyrano. In the pantheon of French culture, Rostand’s play remains one of the most valued of exports.

“Cyrano, My Love,” written and directed by Alexis Michalik, adapting his own acclaimed play, is a backstage account of the writing and staging of the play. From what I can glean—and I have no special expertise in 19th century French theater, or Rostand, or the real Cyrano—it’s not particularly historically accurate. But it is lively, fast paced, charming and funny, and it showcases an especially delightful comic performance from Belgian and French cinema stalwart Olivier Gourmet.

The movie begins with a flop—the flop of Rostand’s poetic drama La Princesse Lointaine, starring the legendary Sarah Bernhardt. Rostand (Thomas Solivérès), a man small of stature but great of passion (you see the parallels forming), with a loving wife and small family to support, is flummoxed, and spends no small amount of time battling writer’s block. One day he is summoned to the theater of the stage giant Constant Coquelin (Gourmet); the night before his appointment he goes to the Moulin Rouge with his tall, handsome pal Leo (Tom Leebs), and they meet the enchanting Jeanne (Lucie Boujenah), with whom Leo is infatuated and Edmond ambiguously entranced.

At Coquelin’s place the next day, the exuberant actor suggests Rostand provide him with a comedy, and in one of the film’s most virtuosic scenes, the playwright invents Cyrano out of whole cloth, and provides dialogue for him in a variety of rhetorical modes as Coquelin provides the prompts. Solivérès really goes to town here, and it’s a good thing he does, because Gourmet is going to go on to steal every scene he’s in. Known mostly in the States as a dour presence in films by the Dardenne brothers, Gourmet here is a motor of comedic enthusiasm.

The movie doesn’t exactly sag in energy when he’s off screen, but one does tend to notice how on-the-nose Michalik’s plot contrivances can get when the movie wanders away from Coquelin’s theater. Michalik’s invention of a black bistro owner, Honoré (Jean-Michel Martial) who cheers on the cast and playwright while fighting small battles against bigotry, is a salutary touch that’s well-played. And the kinda-sorta “Noises Off” hijinks that he has accompany the premiere of Rostand’s triumph are pulled off nicely as well. As backstage movies go, this isn’t as profound as “Topsy Turvy” but it’s almost as much fun as “Shakespeare in Love.” 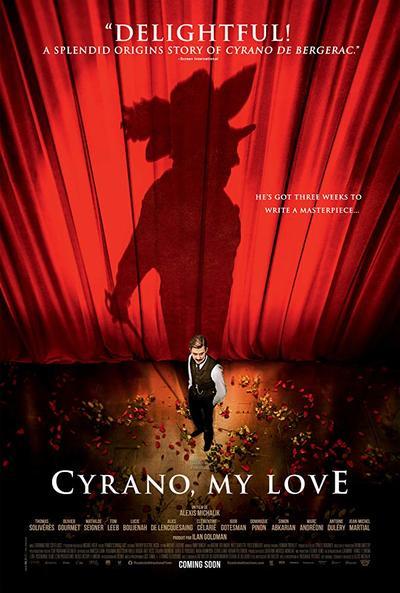