Two-decades-old it might be, but the high-stakes ecosystem that Steven Soderbergh brought to life with his masterful “Traffic” still maintains its enduring appeal and quality. In that regard, it’s impossible to get through even a few minutes of writer/director Nicholas Jarecki’s latest thriller “Crisis,” which unfolds amid the ongoing and deadly opioid epidemic, without repeatedly hearing echoes of Soderbergh’s far superior work that similarly pursues the ins and outs of a drug trade operation through the perspectives of a wide range of stakeholders.

Sadly though, when compared to the heightened sense of style, risk-taking energy, and tight and intricate script of “Traffic” that rarely spoon-feeds its morals to the audience, Jarecki’s film is quite underwhelming and not smart enough—too black-and-white in its principles, too second-hand in its visual aims, and exasperatingly scattered in its construction without the kind of first-rate editing Stephen Mirrione exercised in “Traffic.” While it’s not exactly a dull watch thanks mostly to a star-studded ensemble cast, “Crisis” will likely become one of those titles you will see once, only to file it away with indifference or a mild “it’s fine” verdict.

And this is the frustrating part: it’s almost as if this harmless, well-intentioned movie wants to waste away its potential and be just okay and forgotten. Among what contributes to its paint-by-numbers feel is frankly Jarecki’s flatness as a writer, which, to a lesser degree, also handicapped his respectable 2012 financial thriller “Arbitrage.” Somehow, none of the “this is a public health crisis”-type outbursts of his morally searching leaders or devastating cries of his grieving civilians land here memorably or with urgency. Instead, the personalities of “Crisis,” whose lives eventually yet sloppily intertwine, are an array of tropes used as mouthpieces to deliver only the most familiar dialogue lines and character beats you’d expect from a didactic movie.

The basic story follows three main plotlines and branches out (sometimes, incomprehensibly) to additional pastures from there. There's the secret agent Jake (a reliably severe Armie Hammer, who’s currently storming a real-life crisis of his own after some of his recently-surfaced messages), a DEA officer working undercover alongside menacing drug lords to bring their operations down, while also keeping an eye on his troubled junkie sister (Lily-Rose Depp) addicted to Oxy. There's also Claire (Evangeline Lilly), a successful architect, a recovering addict, and a loving mother who takes matters into her own hands after apathetic police forces rule out her deceased son’s suspicious overdose as an accident. Delivering a surprisingly authentic performance despite her underwritten part, Lilly breathes some much-needed life and humanity into a film that otherwise feels utterly emotionless.

And finally there's the most muscular narrative thread of “Crisis” that somewhat compensates for its weaknesses elsewhere. In it, Gary Oldman convincingly plays Dr. Tyrone Brower, a college professor who needs to get his priorities straight once a high-profile big pharma drug his department is paid to test out proves dangerous, even fatal. At times, you wish that this “The Insider”-like whistle-blowing yarn with complicated real-world implications involving the FDA and the corrupt healthcare industry was deepened, smoothened, and expanded to be the only focus of “Crisis.” Unfortunately, Jarecki leaves it surface-level, throwing even more half-realized figures up against the wall to see which ones would stick. But between a cookie-cutter bigwig baddie insipidly code-named “Mother,” various vapid and offensive references to some evil Armenian guys, a number of one-note kingpins as well as various cops, and pharmaceutical executives inside a machination that expands over to Canada, most of them don’t. In fact, you might have a hard time remembering exactly what function major names like Greg Kinnear, Luke Evans, and Michelle Rodriguez serve in the movie minutes after watching it.

In a lot of ways, “Crisis” is a classic example of a movie that wants to be a little bit of everything, only to add up to a much lesser version of something you keep waiting to see. In the aftermath, it’s regrettable that the title card at the end—which provides the audience with some disturbing worldwide opioid stats—feels like the only worthwhile takeaway from this overcrowded tapestry.

In theaters on February 26; available on digital platforms on March 5. 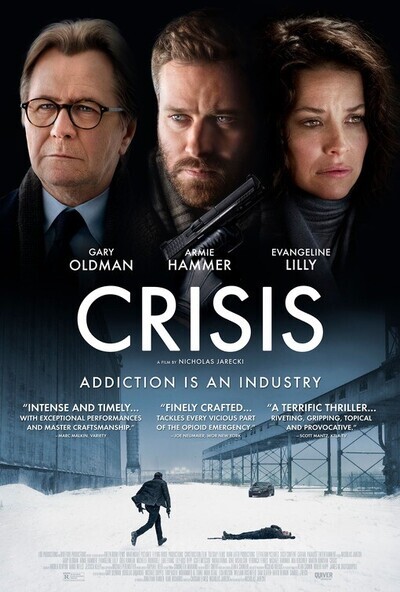 Rated R for drug content, violence, and language throughout.