Bill Kurtis does not actually narrate the documentary "Crazy Love" -- nobody does. But if you're familiar with Kurtis (the ubiquitous television true-crime producer and host of "American Justice" and "Cold Case Files" on A&E, former WBBM-Channel 2 Chicago news anchor, and narrator of "Anchorman: The Legend of Ron Burgundy"), then you'll have an idea of what kind of movie "Crazy Love" is. It looks like it was ready-made for cable, or one of those "Dateline"/ "20/20"/"48 Hours" magazine shows about bizarre crimes of passion and perverse relationships.

The French have a term for it: l'amour fou -- mad love, obsessional love, the kind of love that may not be love at all but some kind of all-consuming passion as powerful as a narcotic addiction.

That appears to be what possessed 32-year-old lawyer/playboy/Arnold Stang lookalike Burt Pugach almost from the moment he set eyes on beautiful 20-year-old Linda Riss in the Bronx on Rosh Hoshanah, 1957. Burt pursued her relentlessly until ... Let's put it this way: Something terrible happened between them in 1959. But that wasn't the end. Other landmarks in their relationship (if you can call what passed between them a "relationship") occurred in 1962, 1974, 1996 and 1997. Don't ask. The fun and fascination of the movie, if you don't already remember the tabloid headlines about Burt and Linda, is wondering what could possibly have happened next. But if you're paying attention to the movie, a painting that appears in the background of certain key interviews will give you a pretty good clue.

"Crazy Love" begins in a blur with some kind of unspecified traumatic, and presumably violent, event and then circles back upon itself. It keeps circling for its first half -- around questions of sex and psychopathology -- until its digressions begin to feel like padding. Just when something provocative is touched upon, the movie changes subject and only returns to pick up the previously discarded thread when another one peters out. You may feel like you're being toyed with, and you are. A less coy and dilly-dallying approach would have given this twisted tale more momentum -- and, probably, have generated more suspense in the telling.

Director Dan Klores, co-helmed the film with actor Fisher Stevens, has assembled interviews with the principals (Burt and Linda, that is), friends and family, bit players, armchair analysts and character witnesses, including reporter Jimmy Breslin, who insists that Burt is certifiably insane.

But Klores weaves an even more provocative commentary on the soundtrack, composed of obsessive period pop songs that suggest not only the psychological states of the subjects but the pervasive celebration and romanticization of "crazy love" in American culture: "Linda," "You've Really Got a Hold on Me," "Poison Ivy," "Can't Get Used to Losing You," "You Call It Madness (But I Call It Love)," "Release Me," "I Put a Spell on You"... Heard in the context of this overheated tale, even the silliest of those love songs can sound pathological ... and scary.

Unfortunately, the soundtrack hits at a shadow-movie, another dimension, that "Crazy Love" itself dares not enter. Its subjects are recognizably human -- perhaps theirs is just like any romance taken to its (il-)logical extreme -- but the film also keeps them at a relatively comfortable distance. In the recent semi-documentary "Zoo," about "zoophiles" who have sex with horses, an animal worker says she isn't sure how she feels about this obsession, "but I'm right on the edge of being able to understand it." "Crazy Love" isn't able to take us to the brink of that precipice.

Maybe that's impossible -- maybe Burt and Linda are truly unknowable -- but "Crazy Love" does not dig too deeply beneath their skin. To explain or theorize is one thing, but the sense of being pulled into a nightmare beyond one's ken is missing. "Crazy Love" seems to promise a demented, true-life film noir love story and winds up delivering an above-average A&E documentary. 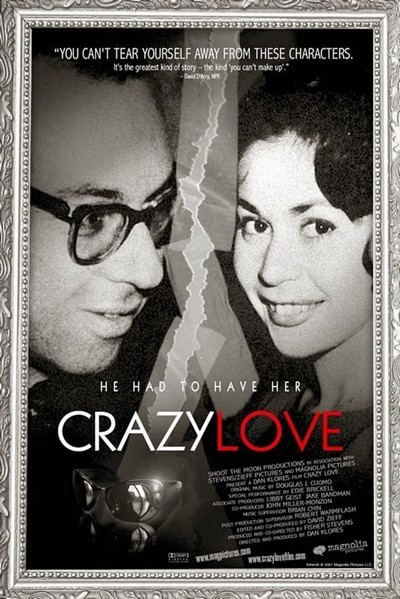