A courtroom drama usually offers at least some of the following elements: a fiery orator, high stakes, an evolving case, thrilling arguments and some degree of resolution—even if it’s not a happy one. “Court" offers none of these elements. The oration from the lawyers practically dares you to stay awake. The case itself is jaw-dropping in its staidness. The arguments are routinely filled with jargon, and this jargon may even be irrelevant. For most of its 116-minute runtime, a resolution appears quixotic.

And yet, Indian filmmaker Chaitanya Tamhane’s first feature is a masterpiece, one of the best films of the year. How did this happen?

“Court” deals with an aged Marathi folk singer living in Mumbai, Narayan Kamble, who’s arrested on a bizarre accusation. The state alleges that a song he performed drove a manhole cleaner to commit suicide, and that he is therefore responsible for the man's death. The case comes to the attention of Vinay Vora (Vivek Gomber), a well-educated and well-off lawyer who picks up Narayan’s fight. He’s up against the public prosecutor Nutan (Geetanjali Kulkarni), who couldn’t be bothered with the plight of Narayan or the logic of the case. Together they’re in front of Judge Sadavarte (Pradeep Joshi), who doesn’t care for anything except upholding his archaic morals and interpretation of the law. In the funniest scene in this surprisingly funny film, the Judge refuses to hear a case because the plaintiff, a woman, is wearing a sleeveless top. There are times when it feels as though the real accused in "Court" are India's judicial system and society.

Nearly 60 years ago, Sidney Lumet locked the “12 Angry Men” of a jury inside one room. The setting’s claustrophobic nature would help viewers understand why people’s lives deeply influenced how they interpreted the law and cold, hard facts. Tamhane takes the opposite means to achieve a similar end. His script, carefully structured but not gaudily so, considers the characters’ lives outside the courtroom as essential to comprehending what they do once inside it. This approach is integral to the movie’s humanistic tone. No character is a villain hell-bent on destroying Narayan’s life. They are all just cogs in an unfair machine.

The viewers follow Vora as he attends a posh club with his bourgeois friends, and shops for cheese and wine without looking at the price tags. Clearly, he can afford to pick up a case so obviously headed towards a dead-end, and no wonder he continues speaking English in the courtroom even though it wins him neither favor nor friend. “Court” also shows Nutan for who she might be in real life: a competent woman who tries to juggle her professional duties with her responsibilities as a mother and wife, all while working for a promotion. Forget ignoring the price tags, for her even using olive oil in cooking is a matter of fantasy to be discussed with commute buddies.

There is a moment where it feels like “Court” could end. It seems to have made a point. The viewer has understood what this universe entails. And the filmmaking builds up to a memorable closing shot. But then the film goes on. Over a coda that’s perplexing at first, Tamhane unveils his trump card. With a series of scenes that are remarkable in their assuredness, he underlines, emboldens, and italicizes the purpose of his film.

The acting elevates the words on the page and makes them sing. Gomber, who also produced the film, brings a sense of lumbering calm to his affluent lawyer character. At one point, after being shockingly reminded of what a regressive environment he lives in, he breaks down. It’s not just his sadness that’s moving; it’s his exhaustion. Kulkarni is pitch-perfect as a middle-class Maharashtrian woman. The way she reads out the list of charges against the accused in fluent but monotonous English, only to segue into Marathi when she’s done, is hilarious in its accuracy. Some cast members were untrained, non-professional actors. In the case of the woman who plays the deceased’s widow, it’s eerie how unaffected the scene is before you realize that it’s reality. (The woman is widowed in real life. Her husband was a manhole worker.)

The seemingly interminable drawl of the case is echoed in the filmmaking style, with cinematographer Mrinal Desai utilizing lengthy, static takes. Scenes continue a few seconds or even minutes after the point where other filmmakers might have opted to cut. This ends up adding to the film’s authenticity; the action doesn’t feel directed by force as much as it feels captured by fluke. It’s also a showcase for the impeccable detailing in the film’s environment. As one character gets assaulted outside a restaurant, the framing allows you to see the security guard escape into the safety of the building, while the unending take forces you to watch what he’s successfully hiding from.

That, perhaps, is why “Court” ends up being a great courtroom drama: it treats the audience as both witness and jury and lays out a sprawling argument for them to ponder over. It’s hard to shake this one off long after the credits have rolled. 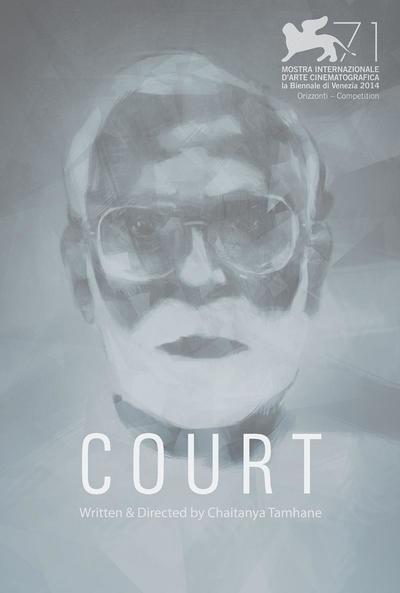