Consider the staggering failure of U.S. policy in Iran over the past ... well, almost 70 years. What of it? Near the end of this documentary, one of its talking heads says that had the U.S. and Great Britain not engineered a 1953 coup of what was then Persia’s government, “We might have had a flourishing democracy in the heart of the Middle East.” This suggests a blunder. But what if failure and war, from the U.S. and Britain’s perspective, are features rather than bugs?

That particular question doesn’t get much play in “Coup 53,” directed by the Iran-born Taghi Amirani, a one-time physicist turned documentarian. In this picture, with the close collaboration of editor and producer Walter Murch, he digs into the oft-murky-seeming origins of the aforementioned coup, one that toppled democratically elected Prime Minister Mohammad Mosaddegh and replaced him with the monarch Mohammad Shah Reza Pahlavi, an inflexible dictator and Western stooge who let Britain and America raid Iran’s oil supplies for decades. Amirani makes himself a character, in the manner of Michael Moore, describing Mosaddegh as someone who could have been Iran’s Gandhi, and bemoaning his own lost heritage. His strategy of portraying himself on the go, in trains, in cars, in archives, sometimes seems gratuitous. But it’s setting us up for the movie’s own metatextual coup, so to speak.

One resource Amirani taps is an over-30-year-old British documentary called “End of Empire.” In going over transcripts and film footage, he discovers a strange erasure. One British interview subject, Norman Darbyshire, has been almost completely cut out of the record.

Darbyshire was, in the early ‘50s, a young British Intelligence operative working undercover. He spoke fluent Farsi and fluent French. He was the key contact for one C.I.A. operative, Stephen Meade. And yet Darbyshire, who died shortly after “End of Empire” was shot, and his secrets, are a redacted presence in the story. Until Amirani happens upon a complete transcript of the interview through whose holes (literally; the paper is cut out of the pages) he’s been looking.

We now watch Murch, Amirani, and journalist Allison Rooper sitting in front of a monitor … looking at the footage of Amirani looking at the “End of Empire” transcripts, with Amirani looking oddly pleased with himself. It’s a bit much. The meta aspects sometimes have the unfortunate effect of taking the viewer’s eyes and ears off what is supposed to be the galvanic subject and object of the investigation.

And then Amirani restages the Darbyshire interview, with Ralph Fiennes taking the role of the agent. Fortunately, Fiennes takes the task seriously and gives a credible impersonation of an interview subject.

And once you’ve become acclimated to all this, “Coup 53” settles into a more conventional form, albeit one that uses a lot of the arguably dubious conventions of contemporary documentaries, including animation.

The tale is byzantine indeed. Amirani and Murch cram a lot of observational material in there, from Mosaddegh’s eccentricities (like American mobster Vinny “The Chin” Gigante, he favored pajamas even when appearing in public) to the steely Machiavellian traits of Reza Pahlavi’s much-relied upon sister. And it portrays the imperialist greed unconvincingly camouflaged by stiff-upper-lip manners that was a hallmark of British colonialism with infuriating detail. Which is not to say that the bald-faced opportunism of U.S. players (itself given a smokescreen on Cold War anticommunism) looks any better. “Coup 53” is worth seeing, but its general effect on this viewer was to seek out more books, rather than movies, on the subject. Which I suppose is something. 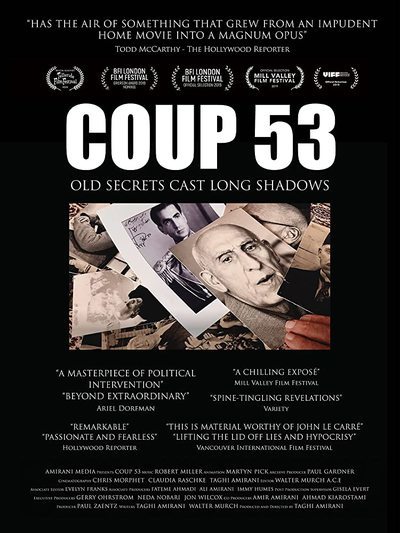 Walter Murch as Himself

David Talbot as Himself

Ervand Abrahamian as Himself

Malcolm Byrne as Himself

Stephen Kinzer as Himself