Before the screening of “Countdown,” a horror film about a phone app that can supposedly tell you the exact moment when you are going to die, the radio personality hosting the screening told the not-exactly-rapt crowd that such an app actually existed. He then encouraged audience members to download it for themselves just before the movie started. Needless to say, I did not bother. But if anyone in the crowd did and found themselves with less than 90 minutes to live, it might have been the one time when they might have been considered to be among the lucky ones. After all, it would have meant that they would not have had to actually sit through this idiocy in full.

As the film opens, a bunch of college kids at a party stumble upon an app that promises to reveal when you are slated to shuffle off this mortal coil. Unfortunately for one coed, her countdown is scheduled to end in a couple of hours and while she tries to avoid the obvious dangers—not getting into the car with her super-drunk boyfriend driving—things inevitably do not end well for her. Meanwhile, at a local hospital, new nurse Quinn Harris (Elizabeth Lail) is informed of the app by that drunken boyfriend (who did crash his car and whose own countdown is imminent) and eventually downloads it herself, only to learn that she herself is slated to die in less than two days. She initially dismisses it but when the drunk boyfriend dies suspiciously and she is unable to remove the app from her phone, she begins to suspect that it's real, and that she's going to die unless she can figure a way out. The rest of the film is a race against the time clock in which she, along with her younger sister (Talitha Eliana Bateman) and handsome lad Matt (Jordan Calloway)—both of whom are similarly doomed—try to get to the bottom of the app and work out a way to beat it. I won’t give away what happens from this point except to note that I think it is the first time that supernatural evil has been combated not by the use of an old priest and a young priest, but by a young priest (P.J. Byrne) and a snarky tech guy (Tom Segura).

My guess is that most discerning readers will have already dismissed “Countdown” as little more than low-grade junk and they would not be wrong. However, even taken simply as low-grade junk designed simply to kill 90 minutes and more than a few brain cells, writer/director Justin Dec comes up pathetically short. At first, you get the sense that maybe it is going to try to serve as a commentary on the dark side of how we have allowed technology to take over all aspects of our lives. That clearly must have proved to be too much because it then quickly devolves into a blatant, if notably less gory, knockoff of the “Final Destination” films in which a group of attractive boneheads go to absurd lengths to try to cheat death and generally wind up failing regardless. Actually, there are moments here that are so absurd—such as the suggestion that Satan’s greatest trick was convincing the world that they didn’t need to actually read any terms and conditions agreements—that I started to think that I was watching an exceptionally straight-faced “Airplane!”-style spoof. Unfortunately, it isn’t that funny either, though some amusement can be gleaned from the realization that the actors look and act like the generic brand versions of the name stars who wouldn’t go near this with a ten-foot pole—Lail is virtually a clone of Jennifer Lawrence, Calloway is clearly a match for John Boyega and Peter Facinelli ... okay, in this case, he probably was the first choice.

Facinelli is featured in the most patently unnecessary element in a film that is chock-full of unnecessary elements. He plays a doctor at the hospital who initially seems nice enough, but then shows his true colors when he tries to stick his tongue down her throat while they are looking over a comatose patient. Then, before she can lodge a complaint, he lodges one against her and gets the hospital to suspend her after a meeting in which she is literally not given a moment to speak. Look, if you want to inject something as serious as the #MeToo movement into a throwaway genre piece, that is fine. But unless you handle it in just the right way and have a legitimate point for doing so, it is just going to come off as crass and exploitative. That proves to be the problem here—not only is it handled as incompetently as everything else, it winds up not even having much bearing on the story when all is said and done.

“Countdown” pretty much fails on every level that a horror film can—the characters are uninteresting dullards, the story is idiotic, and the scares are nonexistent. Even as a dumb exercise in gore-free PG-13 horror designed to separate gullible teenagers from their allowances on the weekend before Halloween, it is an abject failure whose only virtue is its utter forgettability. Put it this way, in terms of brutally hideous experiences in telephone-based terror, you would be better off sitting through “The Emoji Movie” again. 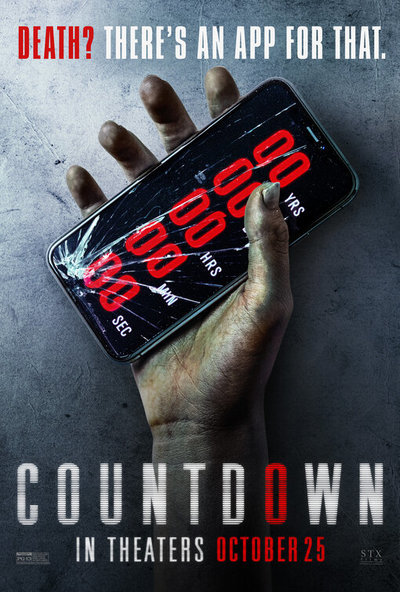