“Each of us is the priest of Christ,” a juvenile detention center priest tells the members of his wayward flock, advice one of them takes very literally to heart in the Polish drama “Corpus Christi.”

That young man is Daniel, whom Bartosz Bielenia plays with a commitment that’s both charismatic and haunting. With his chiseled facial features, wiry frame and piercingly clear, blue eyes, Bielenia is a dead ringer for a young Christopher Walken, and he carries glimmers of the veteran actor’s unsettling intensity, too. There’s an unpredictability to his performance, a sense of both swagger and searching that’s fascinating to watch. Director Jan Komasa’s film—nominated this year for the international-feature Oscar—may feel a tad slow at times, but Bielenia is never less than totally compelling.

The script from Mateusz Pacewicz is inspired by true events, although it sounds like an insane premise. Daniel leaves the correctional center at age 20 after serving time for unnamed crimes. Having experienced a spiritual epiphany behind bars, he’d like to pursue a career in the clergy, which his mentor, Father Tomasz (Lukasz Simlat), tells him is impossible because he’s been a convict. But you can practically see the light bulb go on over Daniel’s head when he hears the priest’s powerful words, and rather than report for duty at the small-town sawmill where he has a job lined up, he walks into the Catholic church, kneels down in a pew and begins praying.

In no time, the same streetwise survival instincts that got him in trouble as a kid kick in, and he tells a young woman praying near him (Eliza Rycembel) that he’s a priest—quite convincingly, actually. Soon he’s donning a clerical collar and agreeing to take over at the parish when the aging vicar (Zdzislaw Wardejn) becomes ill. Watching Daniel fake his way through his first meeting with the elder priest, you’ll find yourself holding your breath, hoping he’ll tell the right lies.

Along those lines, “Corpus Christi” raises intriguing questions about when it’s OK to fudge the truth—or in Daniel’s case, fabricate an entire persona and represent yourself as an ordained man of faith. Certainly he means well, but he’s encouraging people to make themselves vulnerable and trust their secrets—nay, their very souls—to him, a privilege he hasn’t earned. (Although it is amusing to see him figure out what to say on his side of the confessional partition by looking up the words on his smart phone.)

Komasa takes his time letting us get to know this place and these people. He sets the mood with a striking widescreen shot of Daniel’s bus pulling up to this middle-of-nowhere village with its lush green meadows and rolling hills, the complete opposite of the gray, bleak place he just left. We get a feel for its rural rhythms, the quiet punctuated only by the occasional sound of birds chirping and church bells ringing. But despite its physical beauty, this is a wounded town that’s still reeling from a car accident that claimed the lives of several of its young people. As Daniel drinks and smokes by the lake with the remaining residents his age, positioning himself as the cool priest who shoots from the hip, it’s unspoken but clear that he might have been one of those passengers in the car himself if he’d grown up there.

But while he does much of his preaching on the fly, it’s evident he takes this new job seriously. His methods are unorthodox but he’s speaking plainly from the heart and connecting with people. And because he’s been to dark places in his own life, he actually has real-world advice for these folks who need it. He’s naturally attuned to their suffering, and the healing he provides is hard to deny.

This is a complex character full of layers and contradictions. Daniel seems cognizant of the gravity his new job requires, but he also brazenly shakes things up in this insular place and forces people to face feelings they’d rather suppress. He thinks he’s doing the right thing for the greater good but eventually asserts himself further as he feels his influence grow, and puts himself in danger in the process.

It’s easy to imagine that an English-language remake of this film would probably be a wacky, fast-paced comic farce about a charismatic con artist constantly on the verge of getting caught. Mercifully, “Corpus Christi” is more interested in exploring the potential gray areas of pious deeds, and doesn’t necessarily make the road to redemption a smooth one. 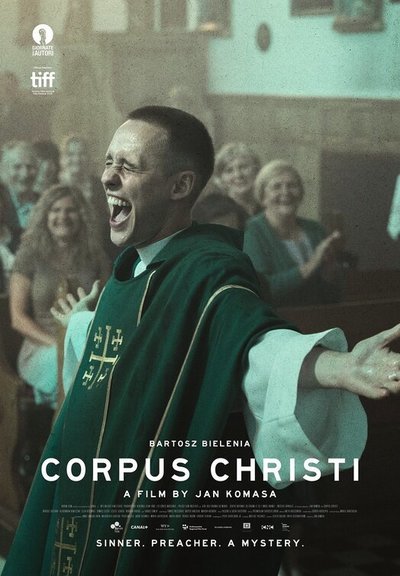