Hulu’s “Normal People” was one of the platform’s biggest hits in the early months of 2020, right when the COVID-19 pandemic forced us all inside and made us pine for sweet distraction. And right off the back of that success, Hulu and the BBC have greenlit and co-produced another adaptation of a Sally Rooney novel, Conversations with Friends, to keep feeding their audience’s desire for sad, horny Irish people and the melancholy ruminations on the nature of early love. For what it’s worth, “Conversations with Friends” keeps the same pensive, contemplative air as its sister show, though its path through the winding complexities of romance in the modern world is decidedly more complicated (and, in spurts, less engaging).

Based on Rooney’s debut novel (Normal People was her second), “Conversations with Friends” puts us right back in the campus of Trinity College Dublin, this time saddling us with perpetual wallflower Frances (Alison Oliver, a Lir Academy graduate just like “Normal People”’s Paul Mescal). An aspiring writer from an impoverished family—her parents are divorced, her father a low-functioning alcoholic—she’s the kind of person who’d rather keep the world at a distance than run the risk of getting hurt engaging with it. Her best friend is Bobbi (Sasha Lane), a brash, opinionated American who just so happened to date Frances three years ago; they broke things off amicably, but the specter of their relationship lingers, charged in their every interaction and joint spoken-word poetry they perform around Dublin.

But things escalate for the both of them when they’re approached at one of their shows by Melissa (Jemima Kirke), an older writer who finds herself drawn by them. She’s popular, settled, and married to Nick (Joe Alwyn), a dashing but brooding actor. Frances is immediately drawn to the latter, and before you can say “We saw you from across the bar and we liked your vibe,” Frances and Nick are engaged in an illicit affair that threatens to both open up Frances’ heart and irrevocably damage their relationships to both Melissa and Bobbi.

That’s the major thrust of “Conversations with Friends”’s 12 half-hour episodes, many of which are directed by “Normal People” director/EP Lenny Abrahamson (“Room”). And in many ways, it feels like a repeat of the same tropes and thematic concerns as the prior series. There’s the steamy relationship that has to be kept secret for the sake of other people’s feelings; love scenes that feel tender and honest even in their participants’ frank fumblings; the ways personal insecurities can bleed out into how we treat others. Frances’ fling with Nick is also the first time she’s been with a man (she’s bisexual), so it shares the other book’s fascination with the conflicting feelings of first love.

The major problem, then, lies in its pace, which is a little too bucolic to handle what’s, at its core, hardly groundbreaking material. We’ve seen the mechanics and rhythms of these kinds of stories before: the lying, the cheating, the narcissism involved in believing that their story will be different from all the other affairs throughout history. Furtive text conversations lay out the terms of their relationship; the two meet up, sleep together, worry what their friends/spouses might think; rinse, repeat. Where “Normal People” charts the devastating impact of first monogamous love, “Conversations with Friends”’ juggles a power dynamic—wealthier, married man in a fling with a young college student—we’ve seen before, and not in a way that opens up many new layers.

The sleepy performances don’t help either. Oliver is admittedly a tremendous talent, and she builds layers of complexity within Frances’ narcissism, which turns her from doe-eyed innocent to emotional wrecking ball over the course of the series. Rooney’s works often center around young Irish protagonists whose passivity hides a kind of self-centered inaction, and that bears out in Frances’ carefully calibrated shyness. “I don’t think you think anyone else is real,” Bobbi spits at her late in the series, and she’s not wrong; Frances, through Oliver’s deeply honest performance, evinces the way we’re all wrapped up in ourselves when we’re young, chasing feelings and damn the consequences. It’s a solid debut turn, bubbling with orgasmic joy and agonizing pain (both emotional and physical, in the case of a recurring reproductive health issue that suddenly throws her fling into perspective).

But her scenes with Alwyn (mostly operating with a kind of mumbled passivity) don’t so much spark as fizzle, dialogue rolling past whispered Irish lilts with all the volume of a stage whisper. (It doesn’t help that most of Nick’s real issues, ones involving depression and his marriage woes with Melissa, are told to Frances by other characters rather than shown.) And apart from a couple of fascinating back-and-forths with Frances in the last quarter of the show, Kirke gets exceedingly little to do as ‘the wife’. As a followup to Mescal and Daisy Edgar-Jones’ wistful chemistry in “Normal People,” it falls a bit short.

Really, it’s Lane who impresses the most here, her Bobbi injecting a welcome bit of chaos into the sea of Irish repression around her. She’s outspoken and unafraid to stir the pot, a brash feminist who sees little use for the patriarchy and men in general; her antipathy toward Nick is just as much fueled by her possessiveness of Frances as it is her disdain for his “boring,” normal life. But her dynamic with Oliver drips with unrequited longing, the kind of buzzing electricity that maintains between exes who’ve chosen to stay in each other’s lives.

Frustratingly, “Conversations with Friends” threatens to become a lot more interesting in its final act, as Nick and Frances’ secret tryst becomes a little less secret, and the show digs more into the ethics of nonmonogamy. Nick wants Frances, but wants to stay married to Melanie; Melanie cheated in the past, and struggles to ‘be okay’ with Frances being in the picture. Bobbi relishes her flirtations with Melissa but feels loyal to Frances. The list goes on, and everyone gets their heart broken in one or more ways before the final credits roll.

The strength of Rooney’s book lies in how it explores the ripples our early relationships can have on the rest of our lives, creating bonds that linger even after the romance doesn’t. It’s a bummer that “Conversations with Friends” only threatens to show us something new in the last three or four episodes when we’ve had to sit through four hours of its far-too-hazy presentation (Abrahamson’s direction is impactful, but dutiful) to get there. Sure, the soundtrack has as many bops as “Normal People”—Phoebe Bridgers even contributes a few tracks, including a new original called “Sidelines.” But as conversations go, this is the kind of chat where you mostly tune out the others at the table, waiting for your turn to speak.

The entirety of “Conversations With Friends” will air on Hulu on Sunday, May 15th. Entire series screened for review. 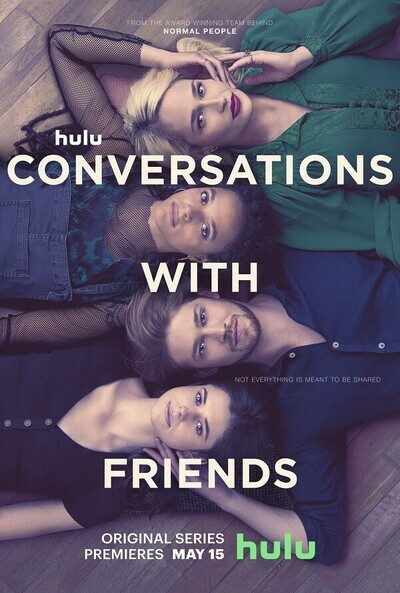