Convergence: Courage in a Crisis

“When I was a boy and I would see scary things in the news, my mother would say to me, ‘Look for the helpers. You will always find people who are helping.’”—Fred Rogers

British documentarian Orlando von Einsiedel has a deep understanding of the very helpers that Rogers spoke of so indelibly. His Oscar-winning short from 2016, “The White Helmets,” was an utterly galvanizing account of the first responders who saved the lives of Syrian civilians buried in the debris left from airstrikes. A sequence in which a baby is pulled safely from what appears to be a birth canal made of concrete until its cries provoke cheers of elation is as profoundly moving as any single image, nonfiction or otherwise, captured on film.

There are numerous moments in von Einsiedel’s new COVID-19 documentary on Netflix, “Convergence: Courage in a Crisis,” that achieve a similar power, particularly those involving migrant workers who have risked catching the virus in order to heal others, all the while being treated as second-class citizens. What’s interesting is in how the film’s chief strength simultaneously proves to be its occasional stumbling block. Ten co-directors from around the globe were assembled by von Einsiedel to provide their own perspectives on those who have kept society afloat during the pandemic. No matter what language is being spoken in any given instance—from Arabic and Farsi to Mandarin and Portuguese—the prevailing message being conveyed is one of unity.

After setting up the various story threads during its first half-hour, the film proceeds to jump seamlessly between them as a way of accentuating their universality. This juxtaposition is most impactful when editors Karen Sim and Raphael Pereira illustrate how the murder of George Floyd resounded throughout the world, illuminating how the struggle for equality transcends the boundaries of nations and how COVID-19 affirmed this truth in the starkest of terms with its disproportionate impact on underserved communities. Everything about this footage is of immense value, yet I found myself becoming occasionally frustrated at times when the film would disrupt a particular story thread that I wanted to continue following.

At its worst, the film threatens to devolve into a feature-length PSA for frontline workers comprised of familiar soundbites, fragmenting vital material that deserves to be expanded into a miniseries. That being said, there are enough individual vignettes here that are given the opportunity to breathe, and therefore resonate on a deeper level, enabling “Convergence” to overcome even its hokey virtual sing-alongs. As the number of US lives claimed by the virus climbs past 700,000, while roughly half the population remains stubbornly unvaccinated, von Einsiedel and his team have crafted a stirring tribute to the sheer incalculable nature of the sacrifice made by countless caregivers.

“There is no vaccine for misguided nationalism,” declares World Health Organization Director-General Dr. Tedros Adhanom Ghebreyesus, whom we see in Geneva, Switzerland, railing against the caustic divisions exacerbated by world leaders like Donald Trump which the virus directly feeds upon. Also appearing briefly in the film is Professor Sarah Gilbert, the Vaccinologist at the University of Oxford who co-developed the Oxford-AstraZeneca COVID-19 vaccine that was approved for use in the U.K. last December. I was reminded of Nanfu Wang’s great HBO documentary, “In the Same Breath,” and its footage of Chen Qiushi—the Chinese activist who went missing last February after reporting on Wuhan’s coronavirus outbreak—while watching the videos shot by fellow vlogger Wenhau Lin, who chronicles his efforts to drive medical care providers and transport medicine. He makes genial and compassionate small talk with his passengers before diligently disinfecting the car seats once they leave.

Iranian couple Sara Khaki and Mohammad Reza Eyni’s portrait of their everyday life together in quarantine is undeniably wrenching at times, yet it doesn’t add a whole lot to the picture overall, save for one brutal and all-too-relatable moment when Sara cries on the phone while grieving the loss of a loved one. The most potent montage of all in the film, set to “Only You,” surveys the sort of crucial communal events long taken for granted, namely weddings and funerals, that families have been forced to experience solely through their computer screens.

Perhaps it’s fitting that many of the best scenes in von Einsiedel’s picture were shot by and center on a Syrian refugee in the U.K., Hassan Akkad, who eagerly seeks work cleaning the COVID-19 ward at a local hospital, despite the trauma he’s previously endured at such institutions. Akkad masterfully uses the internet to create real change, celebrating his fellow colleagues from other countries in Twitter posts that go viral, and when the National Health Service fails to include migrants in its bereavement scheme, he films an impassioned statement to the Prime Minister that results in the policy being revised to protect everyone. Some of the tensest stretches of the film were shot by Mauricio Monteiro Filho at the Paraisópolis favela in São Paulo, Brazil, where we follow events organizer Renata Alves as she supplies the neighborhood with its first-ever reliable ambulance service.

Obliterating the stigma etched upon her by her time in prison, Alves revolts against a fascist government whom she believes wants those in poverty, branded as “cheap labor,” to die. Her observation that the pandemic has only added to what people living on the margins are already dealing with is echoed by physician Dr. Armen Henderson at the University of Miami Health System, who aims to help the city’s largely Black homeless populace living in encampments that the government repeatedly destroys. Superbly lensed by Amber Fares, Henderson’s scenes also chillingly portray how he was racially profiled by a white, maskless cop outside of his own house.

What “Convergence” reinforced for me, more than anything, is simply the overwhelming gratitude I have for every essential worker who took my temperature, bagged my groceries and drove me to my desired destination over the past twenty months. I’ll never forget the benevolent nurse in Cook County who administered both doses of my Pfizer vaccine, nor the sister of a colleague who died after caring for the pet of a client infected with COVID-19 at her veterinary clinic. The client refused to wear a mask, eventually forcing the cancer-stricken veterinarian to quarantine for 25 days without chemo. No monument, however towering, could possibly encapsulate the heroism of helpers the likes of her.

The same could be said of the doctors who ensure that the birth of an Indian couple’s child won’t be endangered by the pandemic (these scenes, directed by Juhi Sharma, offer a tangible glimmer of hope). Yet the film’s most moving moment of all takes place in Lima, Peru, where Dr. Rosa Luz López cares for a young patient, Aldair, with a refreshing dose of good humor (she refers to her hazmat suit as a “Tellatubby costume”). After Aldair becomes healthy enough to have a tearful reunion with his father, co-directors Lali Houghton and Guillermo Galdos follow López back to her office, where she finally unleashes her tears of gratitude. “I don’t want commendations,” she insists, “I want a better health care system.” The principle of treating others as you wish to be treated is embodied with such radiance by López that it stands as a guiding light for us all. 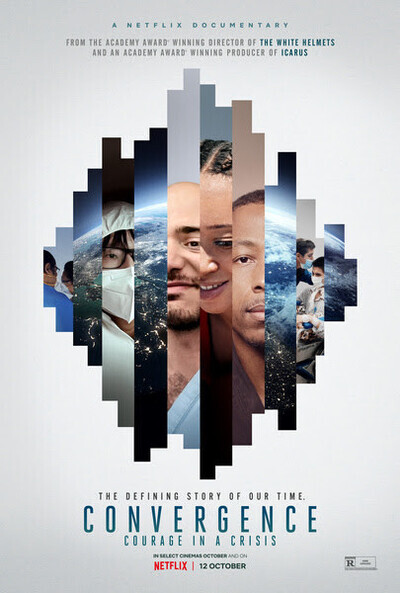