I don't know exactly what I expected of "Contemporary Color," but I definitely didn't expect what I got. That makes it very much on brand for David Byrne, the former front man of the Talking Heads and primary creative motor behind this curious and fascinating movie. Byrne has always specialized in art that defies easy categorization, and that's what this movie is. You could call it a musical performance documentary and not be wrong, but it's trying to do other things, too—some expertly and others not so well. There's never a point where you quite get a handle on it because it keeps changing in front of your eyes.

In theory, this documentary from New Orleans-based filmmakers Bill and Turner Ross is a recording of a concert at Brooklyn's Barclay Center arena that paired off high school color guards with top pop acts, including Ad-Rock of the Beastie Boys, St. Vincent and tUnE-yArDs. This is not a formal collaboration between the musicians and the dancers in the color guard, a phalanx of high school students in leotards who swirl flags and toss rifles and strike poses in time to music. What's happening between the musicians up on the stage and the color guard on the floor seems like a form of interpretive art. The color guard is making a work of art that responds to the music.

So what you're looking at, perhaps, is a pair of works that occur adjacent to each other, one moving in ways that responds to the other. The result is probably close to what the color guard might do anyway if executing a routine to a piece of recorded music in a gymnasium. But the presence of live musicians in the hall adds excitement that a recording can't match. It makes you feel as if there's a live, electrical connection between the bands and the expressively-choreographed dancers.

The filmmakers add a third element, panning, zooming, cutting and dissolving in ways that amplify both the color guard's actions on the floor and the vocal and instrumental sounds being produced by the band on the stage. One number starts with a long, slow zoom that's perfectly timed: it starts way back in the hall and finally comes to a full stop in a closeup on the face of the band's lead singer. Other times, the Rosses will superimpose the band and the color guard in painterly ways that make them seem as if they're merging, or that one is enclosed by (or being released from) the other. Periodically, the filmmakers will cut away to performers getting ready to go on next, or artists killing time because they aren't on for an hour, or to David Byrne himself wandering the arena's labyrinth of hallways with an earpiece cord hanging down, sipping coffee, doing media interviews or quality control.

The entire event was conceived and overseen by Byrne, who visited color guard performances in the American Midwest out of curiosity and fell in love with the scene. At its best, some of the sequences made me wish that the film were in 3D (like the concert documentary "U2 3D," easily the most original and daringly abstract use of the medium I've seen) or that they'd pushed the concept further in one direction or another, making it more of a pure, even psychedelic spectacle or less of one. As is, the snippets of ordinary, documentary-like backstage action and conversation break the film's spell, or give you a bit of context and backstory about the performers and choreographers but not enough.

There may also be moments when you wish, as I did, that "Contemporary Color" paid more attention to the motions of the color guard as they moved through the frame in groups, and framed their entire bodies instead of going in close to create abstracted flurries of hands, feet, torsos and props. That being said, the film's arrangement of bodies onscreen is so striking that even when the movie's energy starts to flag in the second half, there's always something beautiful to watch or listen to. I hope the filmmakers don't take it as a knock when I say that this project would probably work just as well or better as a video installation or virtual reality experience. It's more visceral than intellectual, more about rhythm and texture than imparting facts. If you decide to go where it's taking you, you'll enjoy it. It's a musical performance documentary, but the film is giving a musical performance of its own. 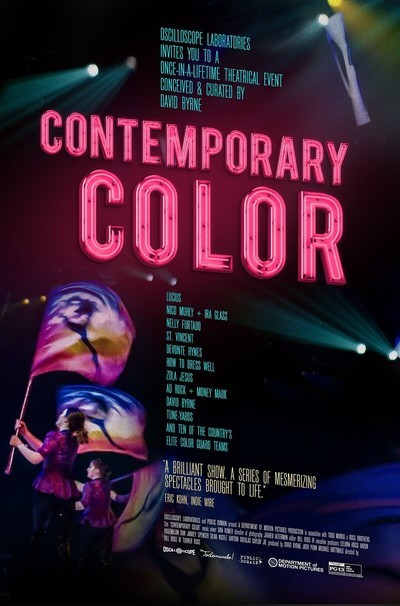