It has been over three decades since Gregory McDonald’s Fletch headlined a feature film (in the pretty awful “Fletch Lives,” the only Chevy Chase-led sequel to the beloved “Fletch”). It’s not for lack of trying. Kevin Smith notoriously came this close to getting a “Fletch” reboot off the ground with his BFF Jason Lee in the title role, and the star of “Chasing Amy” seemed to have just the right amount of sly charm to step into Chevy Chase’s shoes. It didn’t happen, and the project went back into limbo until this week when “Confess, Fletch” will hit theaters with a dull thud.

There’s something so dispiriting about seeing talented people drowning in a comedy that can’t find the rhythm of its own jokes. This adaptation of the McDonald novel by director Greg Mottola and co-writer Zev Borow simply struggles to find its punchlines too often, getting the occasional pleasant chuckle but lacking the consistent personality of the original. Worst of all, a leading man who has proven he can do this kind of comedy before looks stranded by a director who never figured out this character in either dramatic or comedic terms. When it comes to the mystery, he goes so cavalier that he almost feels apathetic, and the jokes are either over-played (a few punchlines seem literally yelled) or under-played to the point of disappearance. It starts to feel more like a contractual obligation than the passion project it would have been with Smith. Confess, filmmakers, you didn’t really want to make this movie.

Jon Hamm plays Irwin M. Fletcher, a former journalist who opens the film in a relationship with a woman named Angela (Lorenza Izzo), who is in a bit of family drama involving a woman known only as The Countess (Marcia Gay Harden) and a missing art collection. While staying in Boston to investigate the situation, Fletch discovers a dead body in his home, leading two cops into their own investigation—played by Roy Wood Jr. and Ayden Mayeri (who has maybe the most consistently funny comedic timing with Hamm)—that centers Fletch as the suspect in the murder. Fletch has to clear his own name, find the missing art, and get up to some silly comedy hijinks along the way, including dealing with an unstable neighbor played by Annie Mumolo and reuniting with the singular John Slattery for a movie-stealing scene in a newsroom.

None of it adds up to much in terms of plot, although that’s not too unusual for this franchise. The mystery/investigation aspect is just the skeleton on which to hang the comedy, but it would have been nice if the film felt like it had even the most modest of stakes. It feels like everyone involved in “Confess, Fletch” mistakenly adopted a lackadaisical tone that they think defines this character. It’s fun to watch a character like Fletch escape hot water, but it’s never even lukewarm here, and so every time that the movie gets back to its plotting, it just sags like a bad episode of a cable TV mystery-of-the-week show.

The comedy makes out just a bit better. Hamm stumbles through most of the movie, never getting the right tone for Fletch, but he has some playful moments with other performers that work, scenes wherein he allows a performer like Slattery or Harden to shine. The truth is that Hamm is a better straight man than comedy centerpiece, and he gets way more out of a startled look than most of the flat joke writing in the film. It’s not really his fault that Mottola directs him so inconsistently, letting Fletch himself to fade into the background of his own movie. Of course, that’s part of the design of this character—one who glides through investigations as the chaos erupts around him—but that’s harder to play than it looks.

And it doesn’t help that the supporting crew isn’t quite thrilling enough to offset the bland center. They’re often pitched as cartoonish, which doesn’t allow Hamm anything to do comedically. Fletch is the kind of character who pulls apart the flaws of the snobby elite around him but characters like Harden’s and Mumolo’s are so broad that they do all the work for him, leaving him stranded and looking bored.

It took over 30 years for Hollywood to make another Fletch movie. It might be another 30 before they try again.

In theaters today and on Showtime on October 28th. 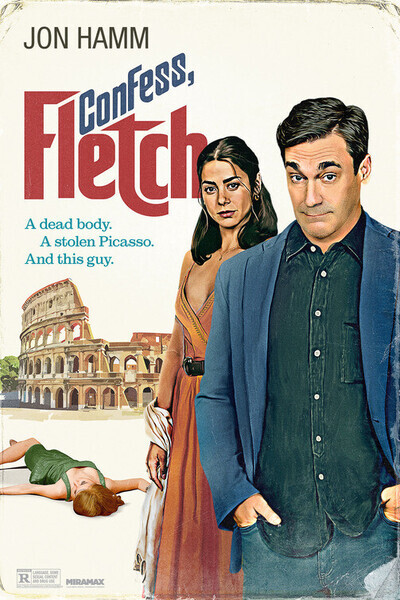 Rated R for language, some sexual content and drug use.

Marcia Gay Harden as The Countess