It’s always pleasant to have a movie kick off with a piece of music you like, so the sound of Roxy Music’s “Love Is The Drug” over the opening credits of “Compartment No. 6” brought an easy smile to my face. But as the movie cut to a funky/lively party scene in a Moscow flat, attended mostly by people seemingly in their thirties, I had to resist for a moment.

Would this be one of those movies in which a Director of a Certain Age bestows his own musical tastes on a social contingent younger than his own? Because that’s potentially a demerit. Such concerns do take a back burner as director Juho Kuosmanen’s inquisitive mobile camera wanders through the party. Laura (Seidi Haarla) is a seemingly insecure guest at this to-do. When she enters a room where some decidedly academic-casual characters are playing “identify that quote,” she’s one-upped by the woman running the game, and in an insinuatingly humiliating way. Later, we find out Laura’s Finnish, in Moscow to learn the language, and that the woman who humiliated her is her lover here.

Soon Laura is on a train, in the title compartment, on a several-day journey. The fact that she takes videos on a camcorder and tries to call her erstwhile lover—who was supposed to come on this trek with her—from a payphone clue us in: this is a period picture, set a few years following the collapse of the Soviet Union. The train is pretty shabby but has an egalitarian bunk policy: Laura’s compartment mate is a guy, a seeming lout with a shaved head named Ljoha, who’s headed for the same spot as Laura.

That spot is Murmansk, where Laura hopes to take in the petroglyphs (that’s rock carvings to you). Ljoha is going there to work. He jokes to Laura that she might be headed to Murmansk to be a sex worker to workers such as he. And he puts it a lot more crudely than that, which immediately repels Laura.

Adapted from a popular Finnish novel by Rosa Liksom, “Compartment No. 6,” which won the Grand Prix at the 2021 Cannes Film Festival, is a good opportunity to put your money where your mouth is if you’re concerned about the future of character-driven dramatic films. Seidi Haarla as Laura has a slight early-Zellweger vibe. Her character is all raw skin and cloudy emotional weather. Yuriy Borisov’s Ljoha is wiry and equally anxious in a different way, immediately possessive of Laura even as he deliberately alienate each other. Laura’s Russian is fine, but hardly fluent, and Ljoha is not the most articulate guy, and a language joke at the movie’s outset sets up another joke that’s resolved at the film’s end in a way that’s moving albeit a little too writerly.

But that’s okay. The movie’s perspective on two lost souls finding each other is considerate and compassionate and has its feet on the ground. No matter what occurs between the two, it’s clear that everyone knows Laura and Ljoha will not evolve into a credible romantic couple. Because the movie’s not about that, anyway. It’s about something alluded to in the movie’s party scene, during the quotation game. An observation that when you’re running away, it doesn’t matter where you’re running to as much as it matters where you’re running from. “Compartment No. 6” has an always energetic sense of place even when it’s keeping to the confined space of its title room. Combined with the committed acting, it makes for a worthwhile journey. 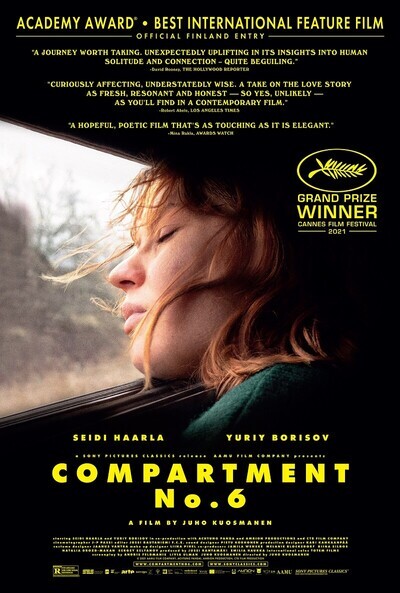