The compact Chaparro—he could be a blockier cousin to Antonio Banderas by way of George Clooney—is here saddled to an unlikely-buddy-cop movie. Maybe you’ve heard of those. His foil is a fat teenage computer hacker in L.A. who’s gotten himself in inadvertent trouble with some very nasty drug traffickers. He's played by Joey Morgan, which is maybe good news for fans of “Scouts Guide to the Zombie Apocalypse,” in which Morgan played … yes, the fat one.

This movie, which is what you’d call a god-awful mess, doesn’t even introduce Morgan’s character until about a half an hour in. That’s how conscientiously structured it is. Instead, it begins with Chaparro’s character, Garza, in a kitchen playing with an adorable toddler and making small talk with the toddler’s mother, his partner’s wife. She tells him he really ought to settle down, family is everything, etc. Whereupon Garza takes said partner out on a drug bust and, well take a wild guess. With the partner dead, the wife and daughter are never seen again. Garza’s taken out for a drink by his commanding officer, who chides him very mildly for not waiting for backup. Garza eyes the fetching barmaid, and starts seeing her in slow motion. Not since David “Al” Hedison cheerfully invited Timothy Dalton to go fishing mere days after his character, Felix Leiter, watched his own wife get eaten by a shark (which also chomped off his own leg) in “License To Kill” has a movie character shucked off tragedy so casually. But wait. There’s a … well I wouldn’t say method to the plot beats concocted by director/co-writer Enrique Begne and co-writers Ted Perkins and Gabriel Ripstein (staggeringly, the son of Mexican cinema giant Arturo Ripstein).

The barmaid and Garza end up together, in a family way, and then she’s kidnapped by the same drug dealers who got his partner, and the U.S. feds get involved (Eric Roberts plays the head honcho). It's a big mess. It’s an even bigger mess because the movie is so haphazardly edited. One understands the effect that Begne’s aiming for—flashing forward and backward in short order during certain scenes to highlight bits of information that are meant to pay off in “aha!”s for the viewer—but the execution is staggeringly shoddy and stumbling. The ostensible humor—diarrhea jokes, amputated-finger-of-a-corpse jokes, burning-people-alive jokes—competes with plot complications thrown about willy-nilly. To make matters worse, the movie looks like it was color-corrected with the “Hot Pink” dial turned all the way up for the whole time. I know. There isn’t really a “Hot Pink” dial on a color-correcting console. But you know what I’m saying.

Eventually, the movie works up a weird fascination. At one point the viewer may be moved to ask, silently, of Chaparro’s Garza, “Yes, sure, you left the pistol with which Kevin Pollak was trying to kill himself in the trash can of the men’s room of this diner. But now that the eccentric bad guys have shown up, don’t you still have that huge Magnum you stole off of the Irish convenience store clerk with whom you had a fist fight 25 minutes ago?” And so on. (The answer was, “Yes, but he must have forgotten, as he pulls it out in a later scene.”) As the movie resolves in a truly, um, unusual plot twist, I guess I’m glad I stayed to the end. Well, actually, no. I only stayed to the end out of professional obligation. In another set of circumstances I could have not learned of the plot twist and had a perfectly fine remainder of my life. 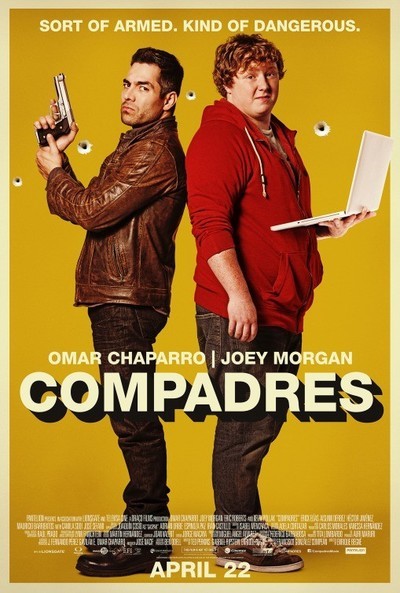 Kevin Pollak as Tex The Banker